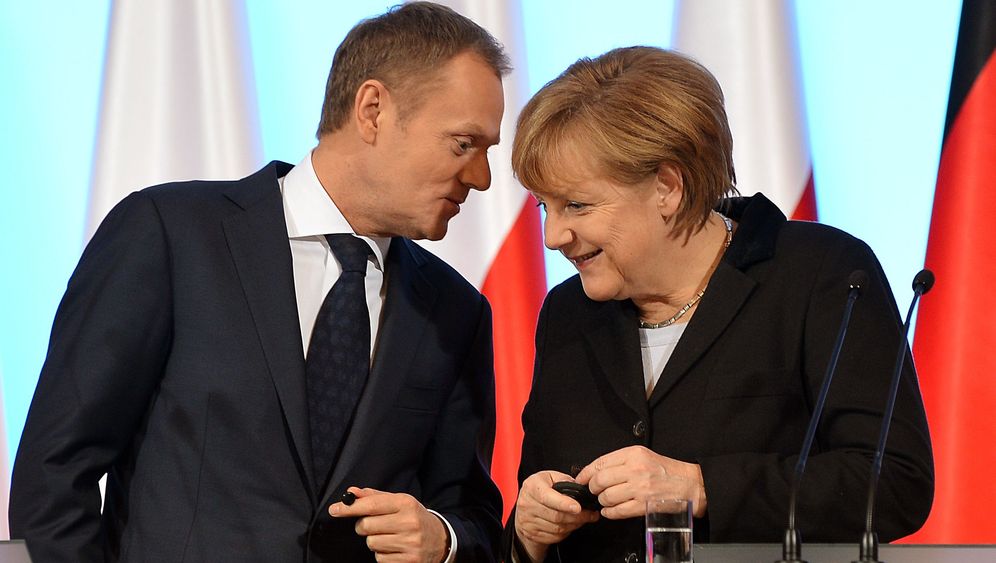 Photo Gallery: The Chancellor and the Polish

He calls her "Dear Angela," she calls him "Dear Donald" -- the chancellor and the Polish prime minster get along quite well. Donald Tusk once said in an interview with SPIEGEL ONLINE, "I am incapable of being angry at Angela Merkel." At the time, tensions had been growing within the European Union about the possibility of a two-speed Europe, with non euro-zone states like Poland being left behind. These days, though, Tusk is even giving his German counterpart Polish lessons. "A. Merkel asked how you correctly pronounce Kazmierczak," he tweeted at the most recent EU summit in Brussels. "She got it on the second try :)"

Kazmierczak is the original name of Merkel's grandfather and father, a secret of the chancellor's family history that Stefan Kornelius, a prominent journalist at Germany's respected Süddeutsche Zeitung, revealed in his new biography "Angela Merkel -- The Chancellor and Her World." According to the book, Merkel's father wasn't called Kasner as a child, but rather was born Horst Hazmierczak. At the age of four, his parents had their name Germanized to Kasner -- not an uncommon thing to do at that time. Had they not done so, Merkel would have entered the world as Angela Kazmierczak.

Media in Germany's neighbor to the east has called the news of Merkel's Polish roots a sensation. "Finally we know why Angela Merkel speaks so heartfelt about Poland," wrote the center-left Gazeta Wyborcza. The local edition of the newspaper chose the headline "Angela Merkel Granddaughter of Poznan -- Really!" Merkel's grandfather Ludwig Kazmierczak came from the city that now lies in west-central Poland, born in 1896 as the illegitimate child of Anna Kazmierczak and Ludwig Wojciechowski. He grew up in the care of his mother and her later husband Ludwig Rychlicki.

A Bicycle Tour Through Masuria

Polish broadcaster TVN 24 showed images of the yellowed public archives of Poznan, which prove that Merkel's Polish grandfather was born in the city. Poznan, which had historically shifted back and forth between German and Polish control, then belonged to Prussia. After World War I, the Treaty of Versailles declared the city Polish. Merkel's grandfather moved to Berlin -- his motives are unknown.

The conservative Rzeczpostpolita has reported that Merkel's special connection to her neighboring country goes beyond her family roots. She made her first trip to Poland as a young citizen of Communist East Germany in the 1970s. Then studying physics at university, Merkel took a bicycle tour through the northeastern region of Masuria. Asked what she still remembered of the trips to Poland, the chancellor answered without thinking, and without accent, "Niema jajek!" -- "There aren't any eggs," newspaper editor Piotr Jendroszczyk writes. Merkel apparently read this phrase on a sign posted to a grocery store near the city of Mragowo. Eggs were a scarcity at the time.

Other memories have also been passed on to the chancellor. For example that the Solidarnosc badge she was given as a gift during her trip was then taken away by customs officials during her return to East Germany. Others reported of a postcard of the Gdansk Monument to the Fallen Shipyard Workers of 1970 that Merkel got a scolding for by German border officials upon her return to the German Democratic Republic.

During the summer of 1989, months before the Berlin Wall fell, Merkel, in her mid-thirties at the time and sporting a page-boy haircut, traveled to Poland again with her current husband, quantum chemist Joachim Sauer. The chancellor has kept her name from her first husband, Ulrich Merkel. Her Polish acquaintances recall a campfire where people sang the songs of Russian protest poets Bulat Okudzhava and Vladimir Vysotsky together. The men were very popular in Poland at the time because of their opposition to the Soviet regime.

Merkel has also shared her good memories with Polish politicians. This helped her to establish a good relationship with Poland's notoriously obstinate president, Lech Kaczynski, who died in the plane crash at Smolensk in 2011. The "friendly lady from Berlin" managed to convince Kacyznski to abandon his aim of blocking the Lisbon Treaty unless the weighting of Polish votes at the European Union were based on its pre-World War II population.

Lech's twin brother Jaroslav has been less accommodating. He had no problem pulling anti-German sentiment back out of the hat during the 2011 election, writing a book in which he asserts that Merkel and all German politicians of her generation were working secretly with Russia to re-establish Germany as an "imperial power," in a "strategic axis with Moscow" that would seek to "subdue" Poland.

So far Jaroslav Kaczynski has been the exception to the rule in German-Polish relations, which have markedly calmed in recent years. Improved relations are also surely attributable to Merkel and Tusk themselves. Last week, the pair opened the German CeBIT electronics trade fair together in Hanover. The close working relationship between them, which many observers describe as a true friendship, dates back to the years in which they were both in the political opposition in their respective countries. In 2005, just before Merkel became chancellor, they visited the Memorial to the Warsaw Uprising together. Tusk, who is from Gdansk and also speaks German, remarked on how "authentically" the chancellor seems to have been "moved" at this site of crimes against humanity committed by Germany.

That's the kind of thing that goes over well with Poles. A poll taken at the end of 2012 showed the chancellor ranking as the most favored foreign politician in the country for the third time in a row. She even beat out United States President Barack Obama.