It's 2013 in Germany: Young people are protesting in many cities. They chant slogans like, "We don't want to live on the streets." Long lines stretch out in front of apartments in Munich, Stuttgart, Düsseldorf, Cologne and Frankfurt during house showings. Desperate apartment hunters are even starting Facebook campaigns, writing chain emails or posting ads on streetlights: "A small family is looking for a home in this area! Please give us a chance!"

Politicians are starting to react, too. Hamburg has proposed housing students and trainees on ships. In Berlin, Federal Minister of Transport, Building and Urban Development Peter Ramsauer of the conservative Christian Democrats plans to convert vacant military barracks into dorms and is urging the city to be imaginative. Meanwhile, Peer Steinbrück, the center-left Social Democrats' candidate for the Chancellery, is promoting subsidized housing during his campaign. Even the ever-hesitant chancellor, Angela Merkel, suddenly seems to feel inclined to put an end to rising rents.

Merkel even surprised many in her own party with her campaign pledge a few weeks back to cap price increases on properties coming up for re-rental to 10 percent of average rents in the area. But when the Green Party, which has been touting the issue for two years, tried to push a similar initiative through parliament on Friday, Merkel's coalition parties rejected it. The chancellor appears keen to chalk up a victory on the popular issue in her next term in office.

A Run on Fashionable Areas

The overall impression is that Germany's big cities are facing a housing shortage as bad as the one caused by Word War II. But experts, real estate associations, German renter groups and municipal building companies convey a different message: There is no general housing shortage in Germany. Instead, there is a massive run on certain fashionable areas in popular cities, which inflates prices. Too many people want to live in the same neighborhoods and yet they are surprised that prices for apartments are increasing.

Eric Seele, a 47-year-old residential manager from Hamburg, knows this phenomenon all too well. On a sunny spring morning he takes a drive downtown, turning after 10 minutes into a dead-end street. All the way at the end stands a white house with parking spaces right outside its door. One of the apartments in the house is vacant. Seele is trying to find a renter. "It's a good offer," he says. The apartment is 62 square meters (667 square feet) and has a balcony out back. No street noise can be heard; only birds singing. Three weeks ago Seele posted the offer online: for €620 ($807) excluding utilities, with no broker's fee.

It's hardly a bargain -- but in a city where protesters recently called to occupy vacant office buildings, it's an offer that should theoretically elicit some interest. But so far, it's attracted just three applications, all withdrawn their after the apartment was viewed. Seele is now thinking about lowering the rent to €600.

But he doesn't think the problem is the price. It's the location. Lokstedt is an unfamiliar district to newcomers and generally deemed uncool by Hamburg residents.

If the same apartment was located in the popular areas of St. Pauli or in the hip Sternenschanze district, near Hamburg's Altona area, he would be overrun by offers and forced to take the ad down within two weeks, the residential manager claims. If the location is right, it hardly matters whether an apartment is renovated, or that it costs €900. It wouldn't be a problem to find two college students eager to share an unrenovated and overpriced apartment, he believes. It's baffling, says Seele, that students who would gladly spend a year in Guatemala or Indonesia shy away from Lokstedt in Hamburg.

Real estate agents and property managers in many of Germany's larger cities and university towns are familiar with the problem. They're always hearing about the rampant housing shortage that has allegedly hit their towns -- even though they have affordable properties located close to the city center that take just as long to find a renter as they did years ago.

"A much greater number of people today exclusively focus on the hip districts in spite of prices. So rents continue to rise and the search for apartments is growing increasingly harder," says Axel Gedaschko, president of the Federal Association of Housing and Real Estate Associations (GdW). That's the reason why many people get the impression that the housing shortage in large German cities has grown to dimensions comparable to Hong Kong.

Often it's only two or three subway stops that make all the difference. According to an analysis by Internet portal Immobilienscout24.de, which runs classified ads for rentals and property for sale, five times more inquiries are made for apartments in Cologne's city center compared to the district of Bilderstöckchen -- which isn't much further out. And apartments offered in Berlin's popular Kreuzberg area attract six times as many interested parties as properties in Wilmersdorf, which is close by.

While most apartments in popular areas are rented within five to 10 days -- in spite of high rents -- it often takes around three weeks in other areas according to Immobilienscout24.de. "People who consider less sought-after areas find a much more relaxed housing market," says Lutz Basse, chairman of the Hamburg's housing company Saga GWG, which rents out 130,000 apartments.

According to a study conducted by the Hamburg consulting firm Analyse & Konzepte, students particularly tend to focus on a few centrally located districts. Many are prepared to pay double what they would pay for an apartment in a residential area on the outskirts for a room in the center. That drives up the prices. In many cities one in five people looking for apartments are students.

'Things Have Gone Too Far'

"Hysteria plays a big part on the German housing market," summarizes Ralph Pass, a board member of the German Realtors' Association (IDV). An aquarium filled with colorful fish stands in his office in downtown Cologne. It's supposed to have a calming effect, but Pass can't suppress his anger about the demands and claims coming from apartment-seekers and politicians these days.

"It makes my blood boil," says the 44-year-old, whose property management company is responsible for around 4,000 apartments. "Those who claim that there are no affordable living spaces in all of Cologne and in other big cities are lying," he insists.

The average rent excluding heat and utilities in Cologne has risen by 9 percent. But Pass says dramatic increases in price have only occurred in re-rentals in some popular neighborhoods. He says the hikes in price are also a result of the government encouraging homeowners to conduct renovations to make homes more energy efficient -- costs that are in part then passed on to the renter.

He also places some blame on today's generation of renters, who he says make it easier for property owners to raise rents on a regular basis. "Today's renter tends to be unsettled," Pass says. He points to singles as an example. At first they're satisfied with 50 square meters (538 square feet), but after they receive their first pay raise, they move into a 70-square-meter apartment. That gives apartment owners the perfect opportunity to turn the screws: They have no problems whatsoever increasing the rent when the re-rent the old apartment to a new tenant.

In Hamburg's in-demand Eimsbüttel neighborhood, one out of eight apartments came up for rental between 2011 and 2012. Oddly, 80 percent of the apartments that opened up were given not to new residents, but to people who had already lived in the neighborhood.

So what needs to be done to ease the situation in major cities? Ulrich Ropertz, the CEO of the German Tenants' Association (DMB) says the answer is to build new apartments. If the influx to the cities persists and the trend of people living alone continues, around 250,000 additional apartments will be needed. Already today, around 50 percent of the people residing in large cities are living alone, in some cases occupying living space that would be suitable for up to three people. Something urgently needs to be done for families with low incomes.

However, new buildings alone will not suffice, says Ropertz. "Cities also need to advertise less trendy neighborhoods and make a serious effort to upgrade in ways that target the right groups." He says it doesn't help to build in a place like Lokstedt if many apartment-seekers continue to look only in fashionable areas.

Saga-GWG Boss Basse recently got a taste of how difficult it is to make less attractive districts palatable, especially for young people. Together with a colleague, he took part in a discussion at the University of Fine Arts in Hamburg. When the discussion came to the apartment shortage, they suggested that the students might out to consider living in less trendy areas, like Hamburg's Rahlstedt district or similar. He noted that Saga GWG could offer apartments there for around €7 per square meter, about half of that being demanded in the teeming Schanzenviertel neighborhood. The students weren't interested -- they booed them. 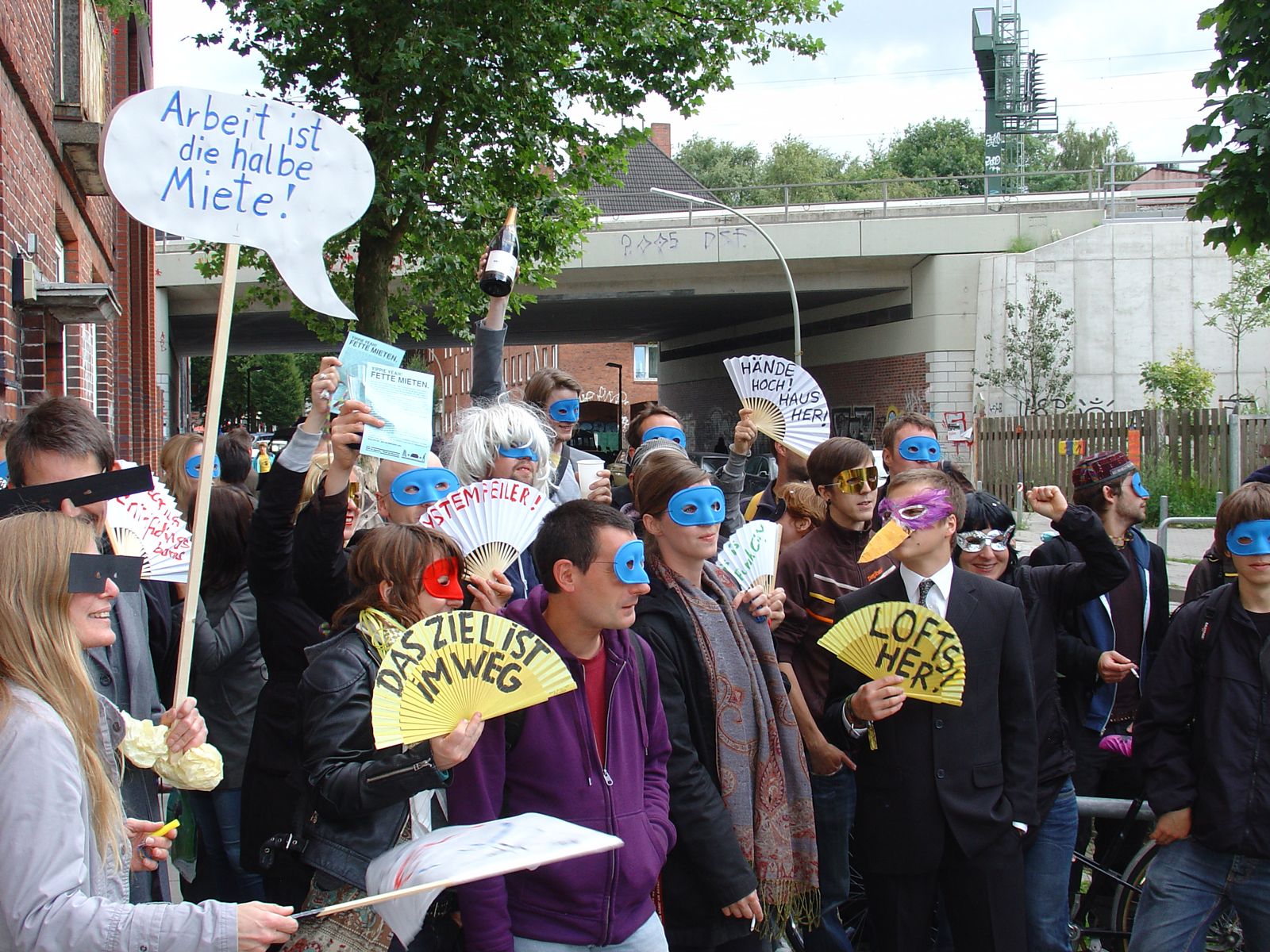