At first glance, the Alternative for Germany's (AfD) campaign ad seems about as threatening as a commercial for the local optician. It features outraged, but pleasant-seeming citizens -- a father and his daughter, a newspaper-reading businesswoman and a cyclist -- looking thoughful while asking questions. "Why is all our money going to Greece, instead of being invested in damaged streets and bridges?", one person asks. "Why are pensioners left with an ever-smaller amount of money in their wallets? Who is paying for the debt that our politicians are accruing?", asks another.

The party is also trying to send a positive message at campaign events. During a demonstration in Hamburg several weeks ago, a young mother was captured on camera by an AfD campaigner. "There aren't any populists taking part here," she says, blinking into the sunlight. Party leader Bernd Lucke, who made an appearance in a casual polo shirt, encouraged people to "demonstrate peacefully".

Just two weeks before the general election, the anti-euro party is hopeful about its prospects. In a survey published earlier this week, the AfD, for the first time ever, came close to achieving the five percent vote-share required to win seats in the German parliament, the Bundestag. Things had quieted on the AfD front recently, until German Finance Minister Wolfgang Schäuble thrust the Greek bailout back on to the agenda in mid-August.

The AfD could stand to profit from these developments in the last leg of the election campaign. Pollsters say the burgeoning party -- which currently has 10,000 members -- shouldn't be written off. According to Klaus-Peter Schöppner, the chief executive officer at polling firm TNS Emnid, an additional two or two-and-a-half percentage points could be derived from protest voters and former supporters of the Christian Democratic Union (CDU) and the Left Party. "It could still get exciting," he says.

Fighting Off the Extreme-Right

Should the AfD be able to jump the five percent hurdle, it could upset the current power dynamic in the Bundestag. The CDU's coalition with the business-friendly Free Democrats would no longer be an option -- because opposition seats would then outnumber those held by the CDU and FDP -- nor would a center-left coalition between the Social Democrats, the Greens and the Left Party. Such a scenario would point to the formation of a grand coalition.

Until now, the mainstream parties have been going out of their way to ignore the euroskeptic party. The plan was not to draw attention to the AfD for fear of raising its appeal. In political circles, the party has been viewed with an increasing sense of disquiet -- no one is quite sure how the AfD could affect the climate in the Bundestag.

One thing is clear, though: the political newcomer, which was founded in the spring, has a shady underbelly. One of its slogans, "Immigration according to qualification, not into welfare" is reminiscent of a similar line used by the right-wing extremist NPD ("Immigration into welfare: we say no!") The party is lining the streets with campaign posters stating that "The euro is ruining Europe." Some of its supporters have been posting Islamophobic and racist content on websites incuding Facebook.

Its relationship with the far-right scene is a continuous source of controversy for the AfD, which has been fighting against efforts by the NPD and the defunct German People's Union (DVU) to infiltrate the party. AfD spokesperson Konrad Adam recently declared that right-wing extremists were "not welcome" in the party.

In comments published in SPIEGEL this week, the head of AfD's Hamburg chapter, Jörn Kruse, admitted he had understimated the problem of people from the far-right infiltrating the party. "Unfortunately, you can't deny that in some states right-wing groups are being systematically formed that want to influence the party's content and image."

Former members of the Republicans, the national conservative party founded in the 1980s, are allowed to join the AfD's ranks. Before they are admitted, however, they have to take part in a screening process. "This means that if someone states that they were affiliated with the Republicans in the 1980s, we interview him to see whether they display any xenophobic tendencies," says party leader Lucke.

In left-wing circles, the AfD has become an object of hate. Campaign posters have been torn down, and Lucke was recently attacked by masked, apparently left-wing agitators at a campaign event in Bremen.

Unlike the unsophisticated National Democrats, the AfD has intellectuals in its ranks, which adds a degree of credibility. Thanks to Lucke, a professor of economics, Alexander Gauland, a former newspaper publisher, and journalist Konrad Adam, the party is able to find resonance in liberal, middle-class and conservative circles. "Sympathizing with the AfD isn't frowned upon," says Schöppner.

By sticking to its simple, euroskeptic line, the AfD has inhabited a gap in the political market. Chancellor Angela Merkel wants to keep the topic out of the campaign. The Social Democratic Party (SPD), meanwhile, has set itself a trap in the Greek bailout debate: its previous support for financial aid means the center-left party is finding it hard to provide real alternatives.

This is prompting widespread discontent. According to polling company Allensbach, eight percent of Germans are considering giving their vote the the AfD. Looking at all of the data collected by the country's main polling companies, though, an average of only 2.8 percent would actually end up voting for the anti-euro party.

A precise prognosis of the AfD's performance on September 22 is, according to pollsters, harder to make than for any other party. "The AfD does not have a traditional voter base, because it has only existed for a short time. With older parties, it is easier to filter out voter fluctuation. This doesn't work as well with those that have just arrived on the political scene," says Schöppner.

When asked whether the anti-euro party could enter the Bundestag, Schöppner says: "That's impossible for me to say." 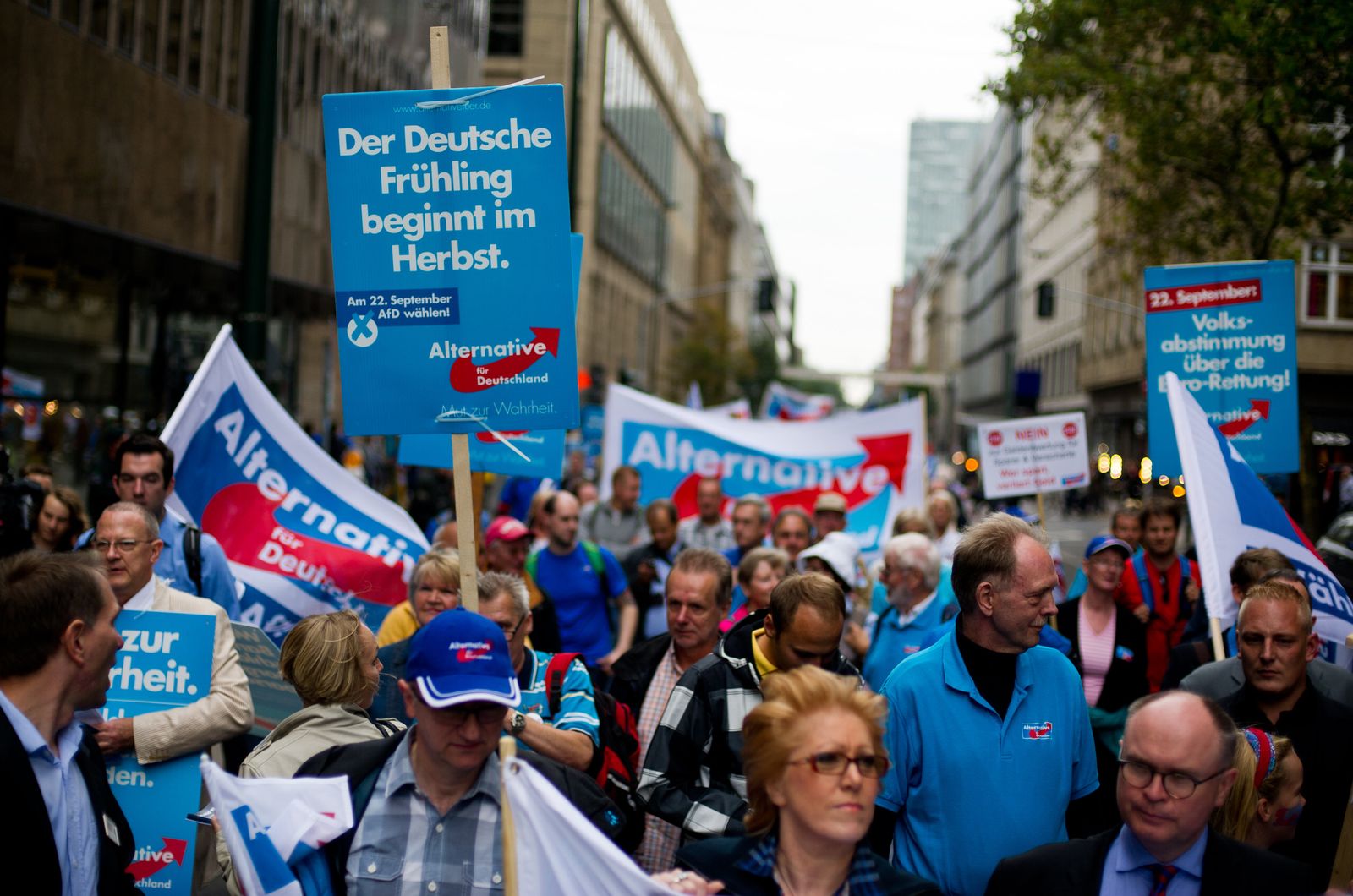 Alternative for Germany (AfD) supporters campaigned on the streets of Düsseldorf on Monday.