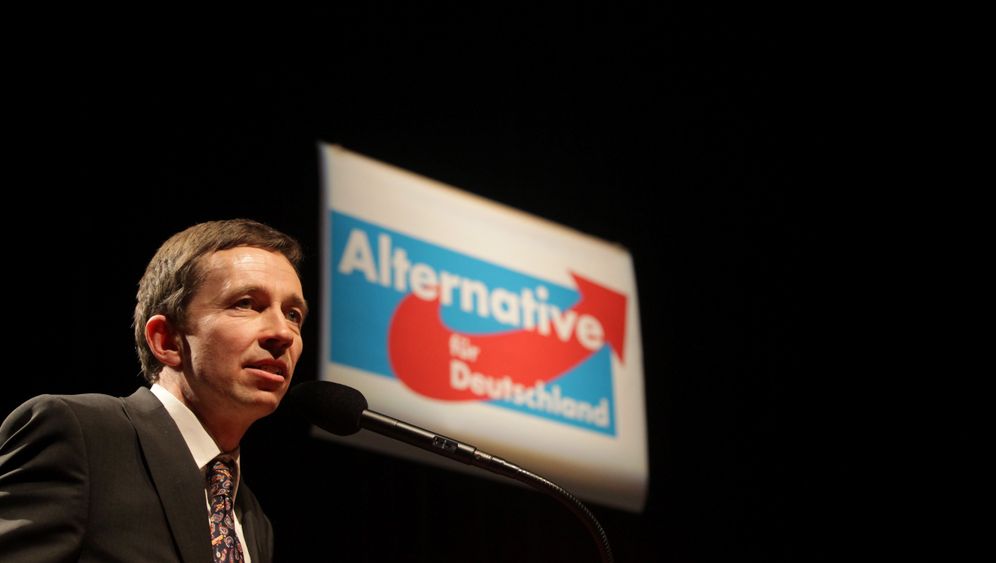 Photo Gallery: The Faces of the Anti-Euro Party

A little suspense is pre-programmed. On its Facebook fan page, the Alternative for Germany has been counting down the days until the conference on Sunday, when the party will be officially launched. "Five, four, three, two …" There's even a punchy slogan: "Straight talk instead of S€datives". Bernd Lucke, the 50-year-old who is co-founding the party and will likely be its first national leader, says the mood is "euphoric."

The Alternative for Germany party wants to shake up the traditional party landscape in the country during federal elections this September with its message of "putting an end to the euro." The party is calling for the "orderly dissolution of the euro currency zone." So what do they want to do, return to the deutsche mark? Lucke describes that path as "one option." The party still hasn't defined much in terms of its party platform, but its founders have argued for the right to hold national referenda as well as streamlining tax laws. More than anything, they aim to attract voters with their "no" to the common currency.

"The euro is dividing Europe," says Lucke, whose day job is as an economics professor at the University of Hamburg. "No common currency is required to ensure Europe's peaceful unity," he adds.

The party wants to offer something different than the euro rescue policies to which Chancellor Angela Merkel's government repeatedly claims there are "no alternatives." Backers of the new party hold little regard for the rescue funds and bailout packages created in recent years and feel they have a better solution for escaping from the crisis. And even though the euro-exit scenarios they provide remain vague, their criticisms of Chancellor Merkel's policies have fallen on welcome ears. In recent weeks, the new party claims to have attracted more than 7,000 members, and state party groups are forming all over the country. Around 1,300 supporters are expected at Sunday's party convention. The venue can't fill any more.

In some respects, Sunday's limits are helpful for the party, which is already having trouble controlling its membership roster. In Germany, mainstream parties have to carefully check each new member to make sure that he or she doesn't have former associations with radical right-wing extremists, which could reflect poorly on the party itself. But Lucke says there is so far no evidence that any political radicals are trying to infiltrate the party. For weeks now, Alternative for Germany organizers have been sending out the message that they are in no way seeking to attract right-wing populists or right-wing radicals with their criticism of the common currency.

'Applause Coming from the Wrong Side'

Keeping track of new members, though, is no easy task. The party claims that it is reviewing each new member for signs of a right-wing past. At the same time, though, all it takes is a quick scan of the party's Facebook page to find the kind of language that is often used by right-wing extremists in defining their enemies. They include official entries with loaded terms such as: "state media," an allusion to a media that supposedly filters out alternative viewpoints; "bloc parties," the term used by the far-right, neo-Nazi National Democratic Party (NPD) to describe the mainstream parties; and "multicultural re-education." Little wonder, then, that the NPD itself has praised Alternative for German for the "important function it serves in breaking the ice and opening doors for the NPD's criticism of the euro and the EU."

Lucke defends the choice of words, invoking freedom of opinion, and he argues that everyone has a right to use "strong words" to vent their views. Still, he acknowledges that "The applause is coming from the wrong side" and says that shared wording doesn't mean common positions. Later, some of the wording is toned done on the Facebook page -- apparently as a precautionary measure.

Alternative for Germany's organizers claim the party will be non-ideological in its approach. Lucke was a member of Merkel's center-right CDU for 33 years until he left the party in 2011. He's one of many disgruntled Christian Democrats who have bolted and joined the new anti-euro party. More than 700 of its members previously held membership in either Merkel's CDU or its Bavarian sister party, the Christian Social Union (CSU), known collectively as the Union. The party claims that hundreds also came from the business-friendly Free Democratic Party, the junior coalition partner to the CDU-CSU in Merkel's government. Given the number of professor and doctor titles appearing next to the names, a list of supporters of the new party resembles a university faculty directory.

In other words, the party is catering to a well-educated, gentrified clientele. It's a demographic in which Alternative has the potential to poach a lot of voters from the Union and the FDP. Officially, the leaders of both say they have no reason to be nervous, and current polls don't suggest much reason for concern. But they are eyeing developments within Alternative for Germany very closely. In fact, some senior members of the established parties are already issuing public warnings about the euroskeptic party's slogans. "It pleases me when the other parties are concerned about us," says Lucke.

There's little agreement among Germany's leading political pollsters about whether there is a threat that gentrified voters will shift their support to the new party. Pollster Infratest dimap has said it is possible that up to 24 percent of eligible voters could imagine casting their ballots for the party this fall. But that figure includes voters from every political party in Germany and, as such, is not representative of what actual behavior might be on election day. Another recent survey by pollster Forsa found that Germans long ago abandoned their nostalgia for the deutsche mark, and that only 27 percent would like to see it reintroduced.

Among pollsters, few believe it is likely that Alternative for Germany stands a chance of clearing the 5 percent hurdle that is required to gain seats in the federal parliament, the Bundestag. Given the very tight lead the CDU-CSU and FDP currently have in polls, any exodus from the parties could be dangerous. As an example, they point to recent state elections in Lower Saxony, where the CDU and FDP lost power in January by only 335 votes in the state election. The protest group Freie Wähler, or Free Voters, had secured some 39,000 votes, backed by Lucke and his Alternative for Germany.

But rising euphoria can also lead to more demands. Lucke has already announced his party will abandon its partnership with the Freie Wähler. This fall, he wants to secure a greater percentage of votes than the 1.1 percent won in Lower Saxony. Much greater. The party founder says he's not a person with a tendency toward exaggerated optimism, but that he is confident that Alternative for Germany will capture enough votes to enter the Bundestag. "I don't want to venture a guess at this point as to whether we will even get over 10 or 15 percent," he says.