With 252 pieces, the puzzle for children eight years old and above is meant to provide hours of fun. But the toy, which sells for $24.99 on Internet retailer Amazon.com's site, has caused a great deal of irritation instead. The problem? Once assembled, the puzzle features an image of the crematorium at the infamous Nazi concentration camp Dachau.

Gerda Hasselfeldt, head of the federal parliamentary group for the Christian Social Union, a conservative Bavarian party, has asked Amazon to suspend sales of the item, SPIEGEL has learned. "For the survivors of the concentration camp and the relatives of victims this is a slap in the face," reads the letter Hasselfeldt sent to the company's founder and CEO Jeff Bezos.

Just 12 miles from the Bavarian capital Munich, Dachau lies within Hasselfeldt's constituency. "The Dachau concentration camp is a place of remembrance for the suffering of countless people," she wrote. "It cannot be in Amazon's interest to sell such a toy."

'A Trivialization of the Place and Its History'

A spokesman for the Dachau Concentration Camp Memorial told the local daily Münchner Merkur that he is outraged by the puzzle. "The toy is a trivialization of the place and its history," Dirk Riedel said, adding that memorial officials wanted the legality of sales of the puzzle on Amazon to be reviewed.

The image was taken by Robert Harding, a photographer who has provided countless pictures for puzzles, some 80,000 of which are offered by Amazon alone. As of Monday morning, the link to the puzzle was no longer available and it appeared that the Web retailer had taken it offline.

A cached version of the link revealed a number of critical reviews from users, who called the product "disgusting" and in "extremely bad taste."

"Remembering such a horrible period in human history is absolutely right and it should be a duty," one reviewer wrote. "But that's the wrong way. There is no reason to produce a jigsaw puzzle from that photo!"

The concentration camp for political prisoners was set up in the spring of 1933, just a few weeks after Adolf Hitler was named Reich Chancellor. It served as a model and what the memorial center calls a "school for violence" for other SS-run camps. Before it was liberated by American troops in 1945, some 200,000 people from across Europe had been held prisoner in the camp and its subsidiaries. Some 41,500 of them were murdered. 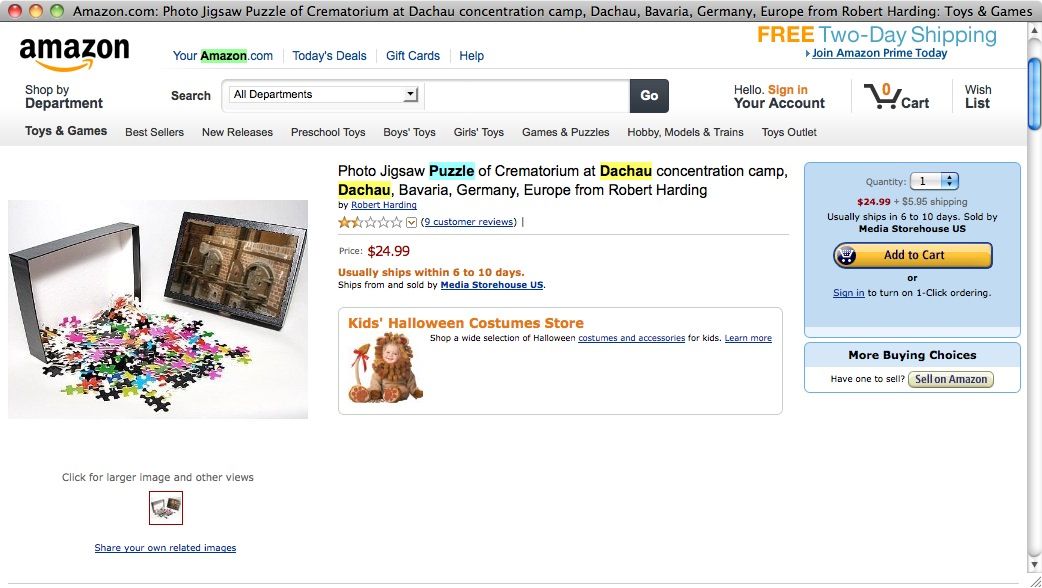 A screenshot of the puzzle on Amazon.