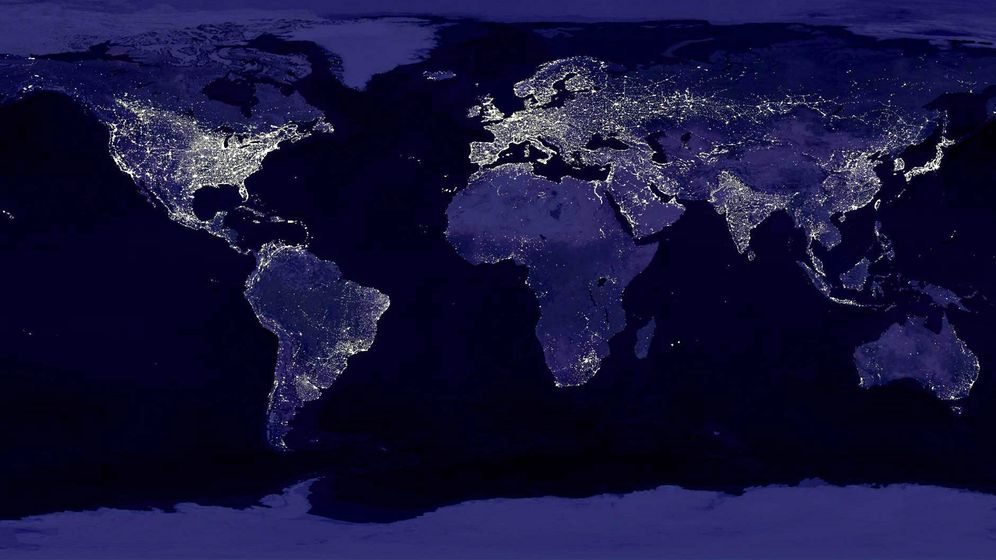 It's hard to find a place in Germany where it gets really dark at night, so dark that the stars in the sky twinkle like lights on a Christmas tree.

Astronomer Andreas Hänel, the 59-year-old head of the Osnabrück Planetarium in northwestern Germany, spent a long time looking for just the right place. With instruments in tow, he went on expeditions into the countryside, but they almost always ended in frustration. In most parts of Germany, there is too much artificial light to allow the sky to turn truly dark at night. The photon soup pouring out of the orange-colored domes of light over villages and cities extends into distant surroundings, swallowing the darkness and even obscuring the Milky Way.

But, one night, Hänel hit a bull's eye. Ironically, it was in a place where experts would never have believed it possible. In the Westhavelland region, in the eastern German state of Brandenburg only 70 kilometers (44 miles) west of the capital, Berlin, Hänel stumbled upon an untouched peephole into the universe. "I've never seen such a dark sky," he says.

Hänel is standing in the garden of the Hammers, who live in the small town of Rhinow. He is astonished. A sky packed with stars stretches from horizon to horizon, with only a small amount of stray light visible along the edges. He can see the constellation Cassiopeia and Perseus nearby. And visible with the naked eye, near the zenith, is the Andromeda Galaxy, whose light took 2.5 million years to reach Rhinow. In a roughly half-hour period, at least five meteors shoot across the pitch-black dome. "This is exceptional," says Hänel.

The astronomer hopes that this sky near Berlin will soon achieve worldwide recognition. This year, the Westhavelland Nature Park plans to submit an application to the US-based International Dark-Sky Association to become a "dark sky reserve," the first of its kind in Germany.

At first Jens Aasmann, 46, the Rhinow town supervisor, thought the idea of caring for the sky like some delicate plant was "a bit crazy." But Hänel soon managed to win him over. Most towns in the region have now agreed to install only moderately bright street lamps that generate no light pollution because they don't emit light upward or excessively to the side.

Aasmann hopes that amateur astronomers will flock to Rhinow to enjoy a certifiably exquisite night sky, where the orange giant star Aldebaran shines brightly and the cosmos seems alive.

'Loss of the Night'

True darkness has become a rarity in industrialized countries. It's the same story everywhere: Just as the sun sets, it starts getting light again. Millions of street lamps light up, neon signs come on and spotlights shine on churches, skyscrapers and factories. Entire blocks, cities and regions disappear into a light cloud that, in many cases, is expensive and unnecessary. For a growing part of the world, the night that has existed since the dawn of time is now gone.

Scientists are only gradually beginning to fathom what man and nature stand to lose in the age of the 24-hour day. In Berlin's Dahlem neighborhood, more than 120 scientists from around the world met last week to discuss the "loss of the night."

The assembled ecologists, entomologists, physicians, lighting designers, astronomers and lawyers agreed that since inventors like Thomas Edison unleashed the power of the lightbulb more than 130 years ago, life on the planet has been plunged into a large-scale experiment that becomes more volatile every day. Its outcome is uncertain. For millions of years, darkness was part of life. And now, suddenly, darkness is absent.

The flood of light increases by about 6 percent a year because cities and towns are constantly installing more and more sources of artificial light, says Berlin resident Franz Hölker, a 49-year-old ecologist specializing in bodies of water. And soon the problem will get even worse: Starting in 2015, municipalities throughout the European Union will be required to gradually phase out their old mercury vapor lamps. Most communities will replace them with highly economical and significantly brighter LED lamps. If the current trend continues, the allure of lower electricity consumption will tempt many communities to install even more outdoor lighting.

The adverse effects of all of this nighttime lighting are all too apparent. Myriads of insects die each year on street lamps or in the webs of the unnaturally large numbers of spiders that now live on street lamps. This reduces the number of insects available to eat for animals much higher on the food chain. Birds, for their part, become confused in the light cloud and collide with brightly lit high-rise buildings. Some bats avoid the light and flee to darker realms, while many moths are no longer reproducing sufficiently in brightly lit areas. "Biodiversity is declining in many illuminated regions," says Hölker.

Humans are also suffering. Since Adam and Eve, mankind has used the stars for navigation, and the stars have inspired calendars, myths and religions. Only 50 years ago, most people were accustomed to seeing the Milky Way in the night sky, while today only few can see it anymore. Some 44 percent of Germans under the age of 30 have never seen the Milky Way with their own eyes.

Doctors are studying the adverse effects of constant light on the human body. The wavelengths of many LED lamps in the blue range directly affect our hormonal balance by suppressing the production of the sleep hormone melatonin. This deprives the body of one of its natural defenses against tumors.

Richard Stevens, an American cancer epidemiologist, suspects that the 24-hour day is partly to blame for the breast cancer epidemic. Likewise, light pollution might also indirectly lead to a higher incidence of intestinal and prostate cancer, diabetes and obesity, all because of the resulting hormonal imbalance.

Part of the problem comes from unrestrainedly bright cities, such as Shanghai, Dubai and Tokyo, along with the major cities along the East Coast of the United States. But their sins pale in comparison to those of Europe. Its densely populated and brightly lit countries are "some of the worst of the worst," says Bob Parks, 57, executive director of the International Dark-Sky Association. Belgium, Portugal and Italy are some of the most egregious light polluters of all.

The Netherlands alone is responsible for an inferno of light. A square kilometer of Dutch tomato greenhouses emits 46 times as much light at night as a comparable area in Manhattan and 211 times as the same amount of space in Berlin's Mitte district.

Shining Saviors of the Night

Many of those who attended the conference in Berlin were brimming with praise for the German capital. Berlin is admittedly bright, but hardly any other major city is as gentle on the night sky. The cash-strapped city has committed itself to a lighting concept that involves keeping the lights as low as possible. Without this deliberate restraint, the magnificent night skies over Westhavelland would have been doomed long ago.

During the day, eastern and western Berlin look similar. But on nighttime images, the eastern section looks much darker. Tegel Airport is currently the brightest spot in Berlin, and a close second is the new Berlin-Brandenburg Airport, which has been plagued by mishaps, and where the lights simply couldn't be shut off at night for several months.

France has placed itself at the forefront of the anti-light pollution movement with a series of ambitious laws. As of July, offices have been required to switch off their lights one hour after the last employee has left the building. Shops and the facades of public buildings must do without any lighting after 1 a.m., at which point even neon signs must be switched off.

These measures help France save as much electricity a year as 750,000 households consume. Soon municipalities will also be required to dim or even turn off their street lighting at night.

Dark-Sky Association Director Parks hopes that the French example will catch on. The incentive to do without artificial light is "currently stronger than ever." Electricity costs are constantly rising, the depressed economic situation is forcing many countries to pursue rigid austerity programs, and climate change is prompting many governments to promote reductions in energy use.

But the saviors of the night also have powerful opponents. Although communities that turn off the lights are doing their budgets and nature a favor, they also face opposition from many residents. For example, most people feel safer in well-lit cities and towns. But this is often a delusion. The crime rate does not increase when lighting is reduced -- only the fear of crime.

When it comes to driving, as well, most accidents happen during the day. Outside hazard zones, scientists have been unable to prove that street lighting increases traffic safety. On the contrary, someone who is driving on a dark country road at night and suddenly enters a brightly lit town is initially blinded. And when the vehicle leaves the densely populated area, it takes a while for the driver's eyes to readjust to the darkness.

The rural Westhavelland region isn't the only place that appeals to the committed champions of dark skies, many of whom are fighting a lonely battle. In the Swabian Jura region of southwestern Germany, engineer and amateur astronomer Matthias Engel leads the fight against light pollution. In the Eifel National Park in western Germany, Cologne native Harald Bardenhagen, 55, is trying to establish a dark-sky park, complete with an observatory. Bardenhagen, who has launched an "astronomy workshop," travels tirelessly throughout the region to convince the mayors of about 30 nearby towns of the appeal of darkness. But it's an uphill battle.

Sabine Frank, a 42-year-old administrative secretary, is equally vehement in her struggle to establish a dark-sky park in the Rhön Biosphere Reserve in central Germany. "It's simply inconceivable," she says, "that conservation stops at 5 p.m. here." She has fearlessly and somewhat successfully tangled with 80 municipalities, five administrative districts, the administrations of three states bordering the reserve -- Hesse, Thuringia and Bavaria -- and even the Catholic Church.

For Frank, one of the hardest nuts to crack has been the Diocese of Fulda. It insists on keeping its churches in the Rhön region brightly lit at night, using giant spotlights that mainly light up the sky and disorient birds. So far, Frank's appeal to the diocese to think about preserving God's creation has remained nothing but a pious hope.