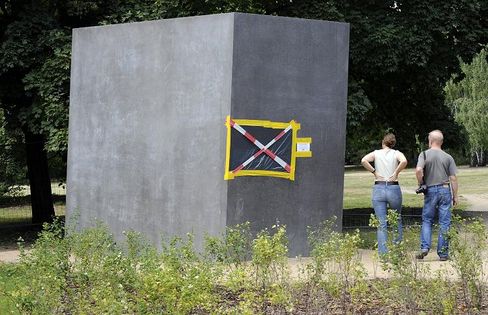 Visitors inspect damage done to the monument to homosexuals persecuted by the Nazis in Berlin.

The mayor of Berlin, Klaus Wowereit, condemned an attack that damaged the city's monument to homosexualspersecuted by the Nazis and joined a demonstration at the scene on Monday afternoon.

"An attack against this memorial is clearly directed against homosexuals -- that can be said without waiting for further police investigations. We must show our condemnation of this act of intolerance and homophobia," said Wowereit, who is himself openly gay.

A viewing window in the concrete monument through which a video of two men kissing can be seen was smashed in the attack. The damage was reported by a passerby on Saturday, police said, adding that they had launched an investigation.

Germany's Association of Lesbians and Gays said in a statement: "Everything suggests that this attack was motivated by a hatred of homosexuals."

"The attack shows in a drastic way how necessary this monument is. Hostility to homosexuals remains virulent. The kissing scene shown in the monument evidently hit the mark. Even in a democratic society there are people who can't stand the sight of men kissing in public."

The monument was unveiled at a ceremony on May 27 and commemorates the thousands of homosexual men who died in concentration camps because of Nazi laws persecuting them for their sexual persuasion.

There were more than 50,000 convictions of homosexuals in the Nazi era, and authorities in some cases ordered men to be castrated.

Rudolf Brazda, a homosexual survivor of Buchenwald concentration camp, said in a statement: "I had feared something like this would happen. People don't learn, they're much too stupid unfortunately. Because they don't want to understand that there is such a thing as homosexuality. Because they don't want to accept that there are people who are naturally different from them."

Brazda spent three years in Buchenwald, from 1942 until the camp was liberated in April 1945, and had to wear a pink badge during that time under Nazi rules identifying him as homosexual.