An 18-year-old in the southern German state of Bavaria stormed a school on Thursday morning in the town of Ansbach with an ax and two knives. He then threw Molotov cocktails and injured a teacher and eight students, two of them seriously. Police were able to stop the student after the 10-minute episode, but only after firing several shots.

The crime occurred Thursday at around 8:35 a.m., when the student allegedly stormed his school, the Carolinum college preparatory high school in Ansbach in northern Bavaria's Franconia region. Police said he seriously injured two students and injured another six students and one teacher after throwing two Molotov cocktails into an eighth-grade classroom. 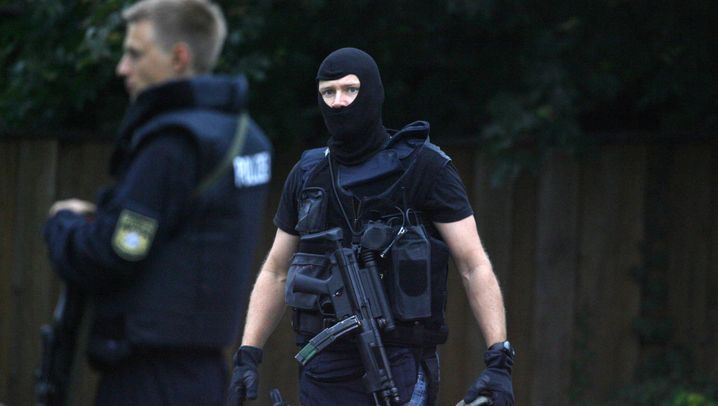 Police were able to stop the youth around 8:45 a.m. SPIEGEL ONLINE has learned that police fired several shots at the youth, seriously injuring him, before they were able to make an arrest. An ambulance helicopter took the 18-year-old to a nearby hospital.

Police hermetically sealed the school's surroundings on Thursday. And although they assume the attacks were perpetrated by a single individual, they also searched the campus for other possible collaborators. "Everyone is now safe," a police spokesperson said, adding there is no evidence that anyone helped the attacker. The local public prosecutor has since filed an arrest warrant against the young man for attempted murder.

'This Terrible Crime Saddens Me'

Bavarian Justice Minister Beate Merk of the conservative Christian Social Union reacted in shock to Thursday's school attack. "This terrible crime deeply saddens me," she said. "I am especially concerned about the injured students." She also called for psychologists to be deployed to provide support to traumatized students. "The injured as well as their fellow students and teachers need the offer of competent psychological help as quickly as possible in order to prevent sustained trauma," she said.

The attack was the second to take place at a German school in less than a year. In March, a former student went on a shooting spree in the town of Winnenden, near Stuttgart, killing 15 people before turning his gun on to himself.