The "Detainee Assessment" for Murat Kurnaz, prisoner US9TU-000061DP, is nine pages long and dated May 19, 2006. The cover page includes a photo, but all you can see are his eyes and forehead, the rest of his face is ominously drowned in darkness.

Number 61 in the identifier indicates that the prisoner arrived at Guantanamo during its very early days. Kurnaz, a Turkish national who was born in Germany, was prisoner No. 61 out of an eventual total of 779 inmates held here.

At the time he landed at Guantanamo on a US Defense Department aircraft on Feb. 13, 2002, the camp had only existed for a few weeks, and the world was seeing the first images of prisoners there wearing orange overalls and being held in cages. Then-US Secretary of Defense Donald Rumsfeld called them the "worst of the worst," and said they needed be locked away. At the time, General Richard B. Myers, chairman of the Joint Chiefs of Staff, offered even more drama when he said, "These are people who would gnaw through hydraulic lines at the back of a C-17 to bring it down." 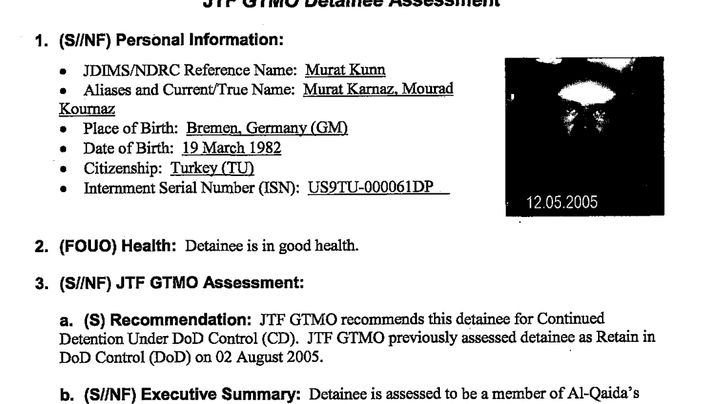 Before transporting him to Guantanamo, the Americans placed Kurnaz in a US prison in Kandahar after he was turned over to them by the Pakistani security forces, who had arrested him in early December 2001 on his way to Peshawar airport. The US military believed it had another al-Qaida fighter under lock and key.

Kurnaz says that he traveled to Pakistan in October 2001 to study the Koran at a school affiliated with the missionary movement Jama'at Tablighi in Lahore. After he was rejected by the school, he traveled aimlessly around Pakistan, naïve and without orientation. It is possible that he was blinded by ideology, but he told his interrogators: "I am not a terrorist and I have never supported terrorism."

When he arrived at Guantanamo in October 2002, he had no idea that he would be spending almost five years on the island and that, from then on, he was categorized as a "member of al-Qaida's global terrorism network" by the Americans, as it states in his assessment, dated May 19, 2006, which was obtained by SPIEGEL as part of its reporting project with the whistleblower platform WikiLeaks.

Kurnaz, who was born in Bremen, Germany, in 1982 and raised in the city, was labelled in the document as posing a "HIGH risk." Page two of the document states that he posed a potential threat to the United States, its interests and its allies.

Thus, Kurnaz, who never even saw the inside of an al-Qaida terrorist camp, was placed on the same level as Khalid Sheikh Mohammed, the architect and chief planner of the Sept. 11 attacks. It was just one of the many contradictions within the Guantanamo system, which appears to have had to reassure itself again and again of the danger posed by the prisoners it held and continues to hold.

"The documents verify ignorance, incompetence and wanton behavior," says Bremen-based lawyer Bernhard Docke, who has represented Kurnaz for years and was part of a class action lawsuit on behalf of Kurnaz and other prisoners that went all the way up to the United States Supreme Court.

Docke was also permitted to view his client's "Detainee Assessment." "Guantanamo appears to be an autistic and Kafka-esque machine of suspicion in which vague conjecture, simply through the passage of time and constant repetition, becomes supposedly solid fact."

Item 7.b. in the document, for example, mentions that Kurnaz had been a member of the "Bremen al-Qaida Cell." The problem is that neither Germany's domestic intelligence agency, which monitors Islamist radicals, nor any other German investigative authorities have ever heard of a Bremen al-Qaida cell. Nor is there a single mention of such a cell in the numerous files kept by the investigative committee of Germany's federal parliament, the Bundestag, into the Kurnaz case. Right up to today, US investigators are the only ones who claim to possess any knowledge of the alleged group, which the report explains "is also referred to as the Bremen Group, the Bremen Cell, the Bremen Terrorist Recruitment Cell and the Bremen Jihadist Network."

In Germany, there were reports of radical preachers and jihad supporters, but never any indications that al-Qaida had a cell in Bremen.

In the same paragraph, the authors of the file state that Kurnaz traveled to Afghanistan in order to "participate in military training and hostilities against US forces." German authorities are unaware of any evidence to back this accusation.

The "Detainee Assessment" also claims that Kurnaz fought in Tora Bora during the attacks by Western allies after the Sept. 11 terrorist attacks. The report claims he was "photo-identified as being in Tora Bora during coalition operations." According to the Detainee Assessment, he had been identified in the photo by prisoner Mohammed Al Qahtani. A Saudi Arabian national, Al Qahtani had been accused of seeking to participate in the Sept. 11 terrorist attacks -- an effort that apparently failed because he was unable to obtain a visa for travel to the US. In 2009, the Bush administration admitted that Qahtani had been tortured. It is possible that Al Qahtani identified Kurnaz in the allegedly incriminating photo as a result of being tortured.

"All the security services that have been involved in the case know that the claim that Murat Kurnaz fought in Tora Bora is grotesque and untrue," says lawyer Docke. "It's a legend refuted long ago, incriminating material that was long ago deemed insufficient by a judge is now being resuscitated in order to justify his detainment."

Kurnaz's case is unique because he was one of the only prisoners at Guantanamo for whom the evidence against him was probed by a US federal court.

The judge there was given complete access to Kurnaz's file, including all classified information. After extensive examination, though, Judge Joyce Hens Green concluded on Jan. 31, 2005 the Guantanamo authorities have "no definite link/evidence of detainee having an association with al-Qaida or making any specific threat against the US."

Furthermore, the Guantanamo authorities do not have "any evidence that Kurnaz … harbored any individual … who has in engaged in, aided, abetted or conspired to commit acts of terrorism against the United States." In short, she said Kurnaz was innocent.

Her assessment came a full year and a half before the Joint Task Force wrote its frightening nine-page report on prisoner, public danger and supposed al-Qaida man Murat Kurnaz. He was finally released in August 2006. 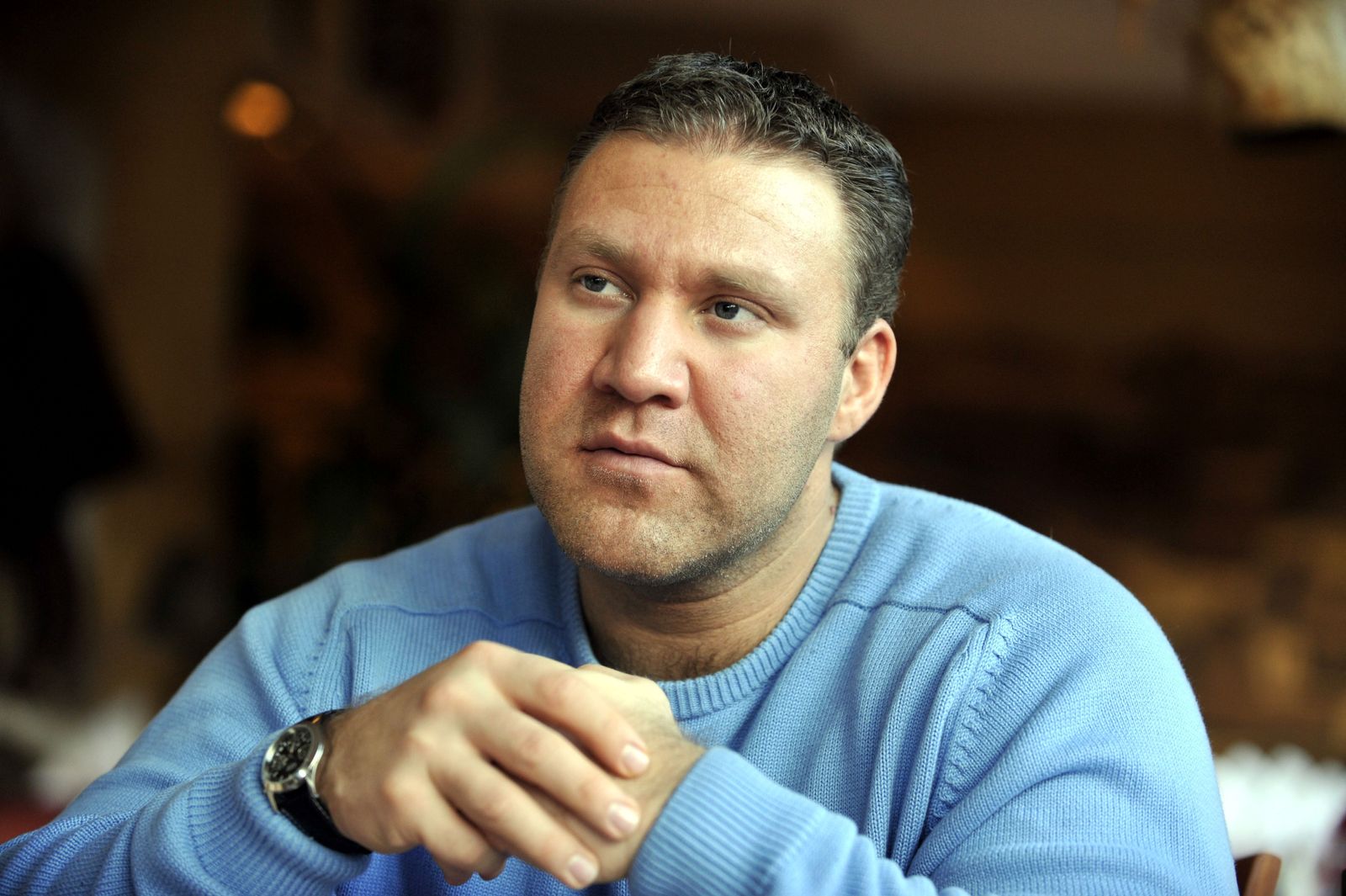 Murat Kurnaz in a photo from 2009: The Germany-born Guantanamo inmate had neither visited a terrorist camp nor harbored ties to al-Qaida.