First. The right-wing populist Alternative for Germany (AfD) is the third-strongest political party in the country and will be taking seats in the German parliament, the Bundestag. There are more than a few right-wing radicals in their ranks, meaning the ghosts of Germany's past are returning. It marks the first time since the early days of postwar Germany that a far-right party will be represented in the Bundestag -- and the AfD will be much stronger than its predecessors given that it is likely to have over 80 deputies. That will have consequences in the form of clashes, provocations and scandalous rhetoric. From the beginning, the AfD will do all it can to ensure that it returns to parliament four years from now -- and for that to happen, German society must remain divided. That will be the focus of the AfD caucus in the Bundestag.

Second. Chancellor Angela Merkel's conservatives -- comprised of her Christian Democratic Union (CDU) and its Bavarian sister party, the Christian Social Union (CSU) -- have suffered significant losses, but Merkel has still been returned to the Chancellery for a fourth term. Creating a governing coalition this time around will be complicated. The Social Democrats (SPD) no longer want to be part of a grand coalition with Merkel's conservatives, as several SPD leaders said Sunday evening, which leaves Merkel with only a single option: a coalition with the Green Party and the business-friendly Free Democrats. There are, however, several hurdles to such a constellation. For one, it would include four separate parties, placing a premium on the amount of day-to-day coordination among them. Plus, it remains to be seen if the Greens are interested in joining forces with a suddenly reanimated FDP. Still, new elections aren't something any of the parties are particularly interested in.

Third. Together, Germany's two big-tent parties -- the conservatives and the Social Democrats -- are weaker than they have been in six decades. Germany's party system appears to be fragmenting and fraying around the edges even more. That too is a consequence of a grand coalition governing the country for eight of the last 12 years. 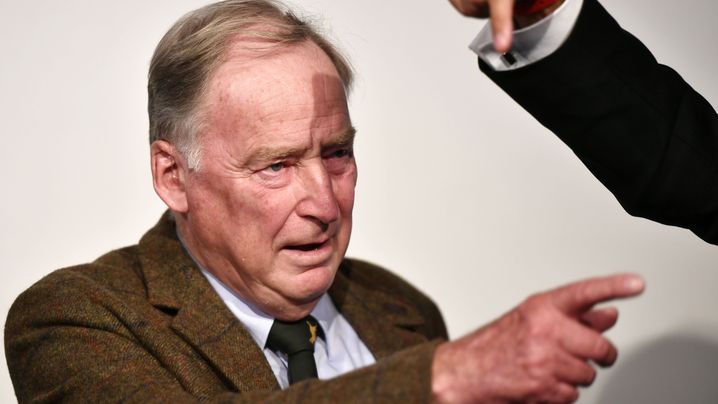 Fourth. The SPD has collapsed. Or rather, it has continued a slide that began in 2009 (23 percent) and stalled briefly in 2013 (25.7 percent). The years in government have transformed a once-proud party into the conservatives' parliamentary minions and with Martin Schulz at the top, the SPD has now suffered its worst result since World War II. Only in the Weimar Republic did the Social Democrats get a worse result in the polls. The party is still insisting that Schulz's leadership is not up for debate, but such election-night pledges tend not to have a long shelf life. Should the SPD head into the opposition, it will face a battle for attention with the AfD.

Fifth. The Free Democrats are back, but Christian Lindner would probably rather have been head of the opposition in the Bundestag than one of two junior partners under Merkel. The last time the FDP joined a governing coalition with Merkel -- between 2009 and 2013 -- its domination by the CDU cost the Free Democrats representation in several state legislatures and it took them four years to recover.

Sixth. The Left Party has remained stable, but it still has zero prospects of becoming part of a governing coalition. And with the right-wing populists now a significant force on the opposition benches, the Left has lost its claim to being the primary representative of German protest voters. That is especially true in eastern Germany, where the Left has traditionally done well. This time around it is the AfD celebrating its greatest success in the states that belonged to the former East Germany.

Seventh. The strong AfD result is particularly unsettling for the Christian Social Union. The CSU was already on the brink of breaking its partnership with Merkel's CDU, and now CSU leader Horst Seehofer will likely be tempted to steer his party even further to the right. Merkel will feel the effects, particularly given that state elections are approaching in Bavaria in 2018. Seehofer hopes to win an absolute majority in that vote, but his party's result on Sunday doesn't bode well for those prospects. After winning 49.3 percent in 2013, the CSU brought home just 38.5 percent this time, its worst showing since WWII.

Eighth. The parliamentary opposition will be polarized between the SPD on the one hand and the AfD on the other -- at a time when the governing coalition will likely be one that Germany has never before seen at a federal level. In the best case, that could be an opportunity for renewal -- and when it comes to confronting the AfD, Germany's fundamental values, including freedom and democracy, are at stake.

To be sure, it won't be boring. 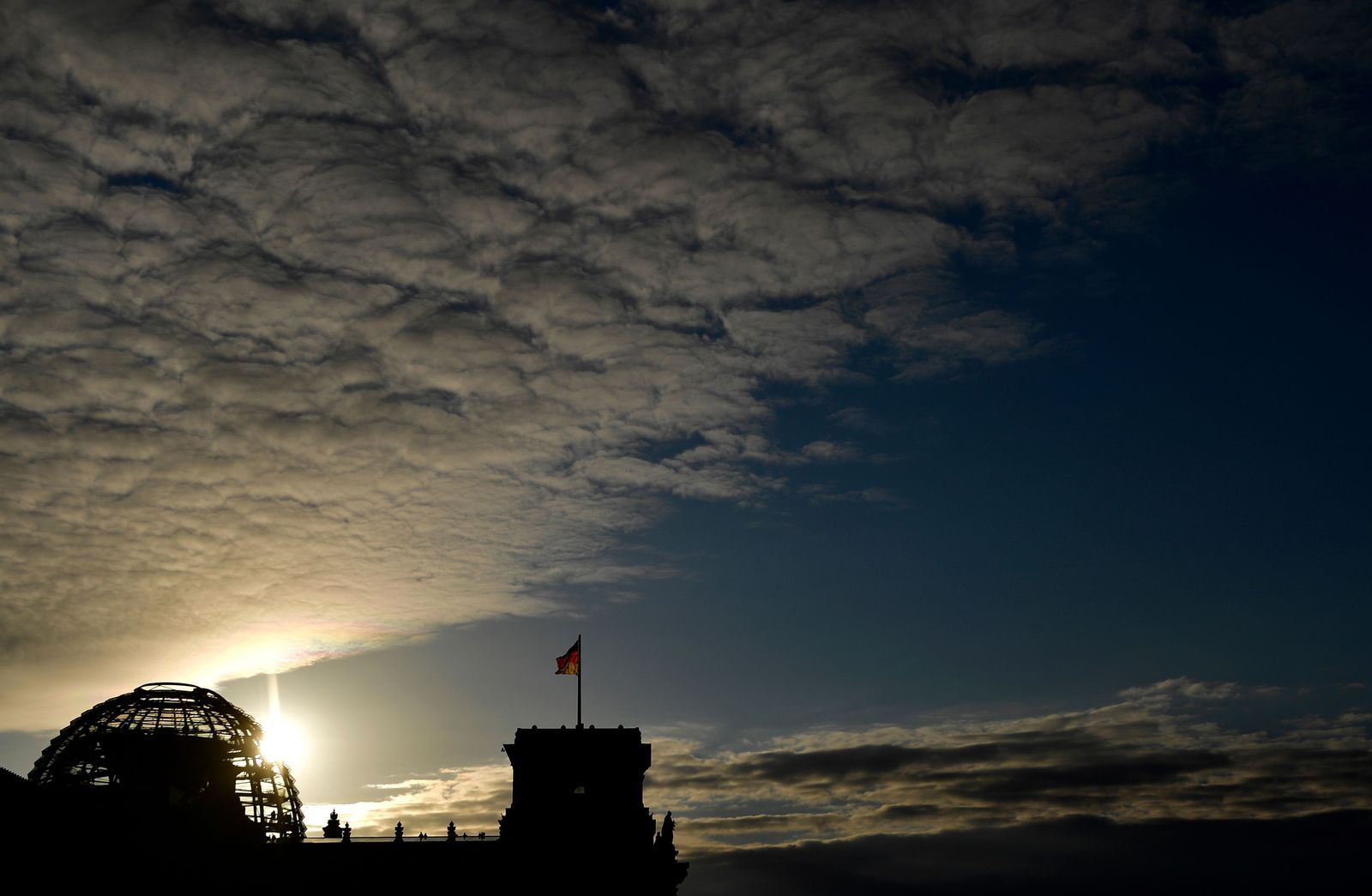 The seat of German parliament 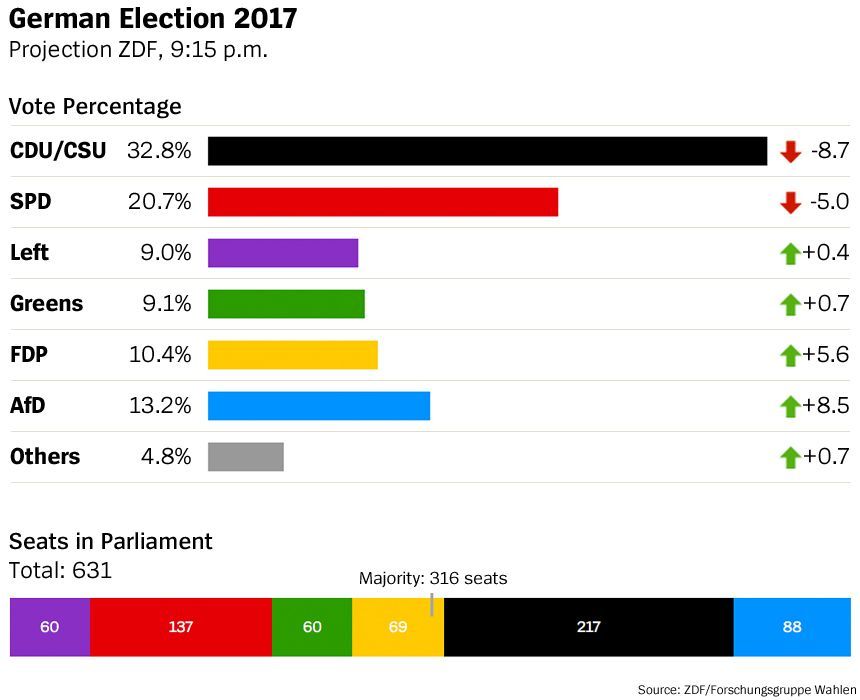