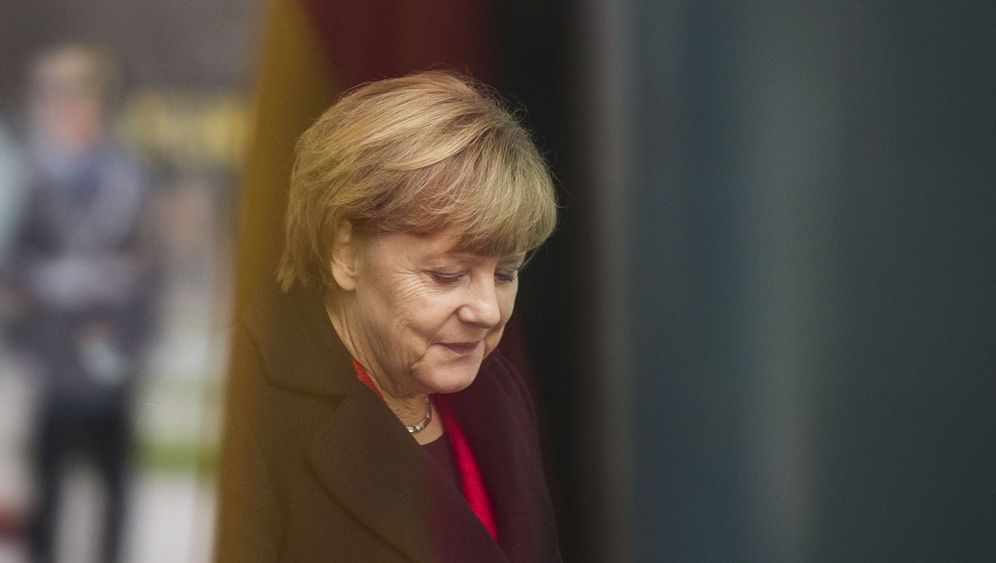 In early September, German Chancellor Angela Merkel issued an order to bring thousands of refugees who were stranded in Hungary to Germany. Germany's basic right to asylum has no upper limits, she said.

It was a moment of unaccustomed conviction from a chancellor who had become notorious for her ability to avoid making decisions until the last possible moment. But she went even further. She equated the refugee issue with other significant turning points in the history of her party, the center-right Christian Democrats (CDU). Issues such as West Germany's integration into Western alliances and Kohl's commitment to keeping nuclear weapons stationed in West Germany in the 1980s. It was as though she were elevating her refugee policy into the pantheon of Christian Democratic basic principles.

And she didn't even bother to inform the CDU's Bavarian sister party, the Christian Social Union (CSU), before doing so.

Now, though, Merkel is in the process of preparing a reversal of her refugee policy. At the G-20 summit in Antalya, Turkey at the beginning of the week, she spoke of quotas -- fixed numbers of refugees that Europe is willing to accept. On the one hand, of course, introduction the idea of quotas is a concession to reality, because the chancellor knows that the ongoing arrival to Germany of up to 10,000 refugees every day is not sustainable.

But the change is also a silent capitulation to her critics. Horst Seehofer, the head of the CSU, and Interior Minister Thomas de Maizière are now setting the tone in Germany's refugee policy, and the Paris terrorist attacks have only given them more leverage. Seehofer and de Maizière have been calling for an upper limit on immigration for months. "Quota" is simply a different word for the same thing.

Merkel is in a tight spot. She made the right decision by accepting the desperate refugees who set out from Budapest for Germany on foot in early September. But in the period that followed, the dimensions of the inflow kept growing and Merkel never conveyed the message that Germany's capacity is limited. Even the coming winter has not stopped the flow of refugees, and leading conservatives are now more openly questioning the efficacy and wisdom of Merkel's plan to limit immigration by combating the underlying causes of migration. For many, the notion of Germany serving as an intermediary and arbiter of global crises borders on megalomania.

Even though she is still publicly sticking to her rhetoric, Merkel has been on the retreat for about two weeks. Leading CDU parliamentarians received the first signs of her change of heart in early November, when they met with her at the Chancellery. In the meeting, the chancellor clearly promised that she would support a reduction in refugee numbers, says one of the attendees. "I cannot guarantee that you will already see a change in the coming weeks," the attendee said, quoting Merkel. But she also said that the current situation could not continue as it was.

Conservative politicians received written confirmation of the promise in the form of a position paper on the government's refugee policy, which Merkel and CSU leader Seehofer drafted jointly. Although the document did not include the word "limit," which many in the party would have liked to see, the concept of "reduction" was mentioned. Merkel also conceded that the flow of refugees needed to be regulated through the use of quotas.

Sealing Off Outside Borders

The idea originally comes from Interior Minister de Maizière, who introduced it in SPIEGEL in mid-September. "This would ensure that we in Europe accept only as many refugees as we can handle in the long term," he said. The Chancellery reacted with reserve at the time, because it appeared that the minister was contradicting Merkel's assertion that Germany's right to asylum had no upper limits.

Government spokesman Steffen Seibert pointedly did not embrace the idea, but stated: "There will be no change to German asylum law." Vice Chancellor Sigmar Gabriel, head of Merkel's coalition partner, the Social Democratic Party, even declared de Maizière's proposal to be unconstitutional. "Establishing quotas for asylum seekers is not a solution. It also contradicts the German constitution," he said.

Now it isn't just Merkel who is talking about quotas, but Gabriel, as well. On Monday Gabriel promised "something like a new beginning in refugee policy" -- by way of quotas. Officials at the Interior Ministry noted with satisfaction that Merkel had fallen in line with the minister. "It is good to hear that the proposal is under consideration," says Parliamentary State Secretary Ole Schröder. "If this were implemented, it would be a trend reversal." The CSU is also rejoicing. "Europe-wide refugee quotas have been one of our demands for some time," says General Secretary Andreas Scheuer. "We are pleased that the chancellor is actively pursuing the issue."

For Merkel, the model is still the best way to save face because it allows her to claim that German asylum law was not compromised. On the other hand, she is drawing closer to her critics' demands to finally impose a limit on immigration.

The Chancellery's plan calls for the EU would accept a generous number of refugees who are currently in Turkey -- in the range of 300,000 to 500,000 people a year. In return, Turkey would have to pledge to stop allowing refugees there -- those who are not part of the ocntigent -- to head for Europe. According to the German Interior Ministry, the EU would intercept refugee boats in the Aegean Sea and return the migrants back to Turkey. If a refugee did manage to reach Germany despite the precaution, he or she could apply for asylum. But the quota solution only makes sense if Europe's external borders so tightly controlled that hardly anyone can get through. Article 16a of the German constitution would essentially be suspended.

In return, the borders within Europe could remain open. This is important to Merkel. She has said repeatedly that she is determined to save the Schengen system of border-free travel within the EU. The price would be to largely seal off the EU external border. The unpleasant scenes Merkel is determined to avoid at the German border would then unfold on the very fringes of Europe instead.

For Merkel, the refugee crisis has become an issue of authority. She was long able to ignore grumbling within her party, but now others are taking the wheel, and Merkel has been put in a position of reacting rather than determining the way forward herself. The turning point was the proposal by Interior Minister de Maizière, who proposed stricter checks for Syrian refugees and limits on family unification.

Chancellery Chief of Staff Peter Altmaier forced the interior minister to scrap his idea. But on the same weekend, Finance Minister Wolfgang Schäuble voiced his support for de Maizière and it became clear to Merkel that her interior minister had strong allies.

De Maizière was long a loyal servant to the chancellor, but he is now no longer willing to support a policy he believes is wrong. He felt slighted when Merkel deprived him of his power and appointed Chancellery head Altmaier to the position of refugee coordinator. Even though de Maizière sees himself as a public servant, he was offended by his portrayal as a Chancellery underling, which led him to take a more self-confident, less conflict-averse approach.

The result, though, was an argument in last week's cabinet meeting. As a rule, the only subjects discussed at these meetings are those on which agreement has already been reached. But when the discussion turned to an EU guideline that de Maizière intended to only partly implement, a fierce debate ensued. Family Minister Manuela Schwesig (SPD) said that it was unacceptable for the interior minister to only focus on the planned reception centers while declining to implement important rules for the protection of underage or traumatized refugees. The argument lasted so long that the chancellor intervened. "Is this really an issue that needs to be discussed in this setting?" Merkel said with a sigh.

It is normally Altmaier's job to avoid such embarrassing friction. Once again, however, de Maizière triggered a spat by going it alone. The interior minister is determined to obstruct new rules that make it easier for refugees to reach Germany.

Merkel is torn. On the one hand, she doesn't want to seem like she is being openly undermined. To conceal her loss of power, she is sticking to her guns -- at least verbally. "I want us to show a friendly face," she said in an interview with German public broadcaster ZDF on Friday. On the other hand, she knows that she can no longer placate her critics by arguing that she is doing everything possible to tackle the causes of the refugee crisis. The CDU doesn't want to wait until the war in Syria is over to see results.

The concept of refugee quotas buys her some time. On Friday, she is in Munich for a CSU gathering, where she is presenting the idea as an additional concession. For weeks, Seehofer has been one of the most vocal critics of Merkel's refugee policy. He sees it as a threat to the CSU's goal of securing an absolute majority in the next Bavarian elections. This will be impossible, Seehofer argues internally, if the party abandons its core competency: domestic security.

Seehofer doesn't want to overthrow Merkel, nor does the CDU. There is no alternative to the chancellor at the moment. Defense Minister Ursula von der Leyen is loyal to Merkel when it comes to the refugee issue. Schäuble, of course, is not: He recently compared the chancellor to a clumsy skier who triggers an avalanche. But he'll be turning 75 just in time for the next parliamentary election, though, and no one since Konrad Adenauer has dared to run for the chancellorship at such an advanced age.

Seehofer and large portions of the CDU simply want Merkel to change her policy. Many feel that she has become oddly disconnected from reality. When a senior CDU politician spoke with her recently, she told him about a conversation she had had with Munich Archbishop Reinhard Marx, who had expressly encouraged her to stick to her welcoming refugee policy. Her commitment was in keeping with the will of God, the archbishop explained. "Perhaps the good cardinal would like to put up posters for us in the next election campaign?" the CDU politician said afterwards.

But Merkel has not lost touch with reality. She knows how precarious the situation has become for her. There will be a reckoning next spring, when state parliamentary elections are scheduled for Rhineland-Palatinate, Baden-Württemberg and Saxony-Anhalt. Merkel may even go down in history as the chancellor who ensured that the right-wing populist party Alternative for Germany became a permanent fixture in the German political landscape.

Nothing has yet been decided. The idea of creating refugee quotas makes sense because it reduces the influx of refugees to a politically tolerable level without sealing off Europe. It is unclear, however, whether Merkel will be able to put her proposal into practice. The Turks have an interest in unloading as many refugees as possible. In the EU, however, few countries other than Germany are willing to accept refugees, as evidenced by the sluggish distribution in the last few months of the 160,000 refugees the EU had agreed to share.

And now, after the Paris attacks, the reluctance has grown even further. The new conservative, right-wing Polish government has already announced that it will not accept any more refugees from other EU countries while the British feel that the refugees are a problem for continental Europeans.

There is much at stake for Merkel. If the quota idea fails, she could be forced to do something she has always ruled out: to close the German borders and turn away refugees. It would be a huge defeat for the chancellor.