When Angela Merkel visited her party's parliamentary group in mid-April, she didn't talk about how she wants to change the pension system. Tolls on German highways were also not on her list, nor were all the problems with diesel emissions in the country. She didn't even complain about the Christian Social Union (CSU), the outspoken Bavarian sister party to her Christian Democrats. Instead, she wanted to talk about the Peace of Augsburg, signed in 1555.

The chancellor has made frequent excursions into history lately. Indeed, the Peace of Augsburg also came up four weeks ago during her visit to the residence of the German ambassador in Washington. The treaty initiated a 60-year phase of peace between Protestants and Catholics after the bloody turmoil of the Reformation and it initially seemed as though people had finally come to their senses. But that image turned out to be a deceptive one. In 1618, a war began unlike any the Continent had ever seen before. By the time the inferno ended 30 years later, large parts of Germany had been depopulated and many cities left in ruins.

To Merkel, the Peace of Augsburg is much more than some distant historical date. Rather, it is a warning of just how thin the varnish covering civilization really is. Just as people in the late 16th century were erroneous in their belief that the Peace of Augsburg would be enduring, we could be just as mistaken today in the belief that the postwar order, with all its treaties and alliances, serves as a guarantee that the scourge of war will not return.

"The coming decades will show us whether we have learned from history," Merkel said in Washington after a lunch with Donald Trump. Accompanying her on her travels in recent weeks -- to the United States, Beijing and Shenzhen -- one doesn't get the impression that Merkel is particularly optimistic. If you look at the world through her lens, the riders of the apocalypse are already appearing on the horizon.

After the financial crisis of 2008, Merkel had hoped there would be an international agreement to tame the capital markets, just as the international community had been able to agree on the Universal Declaration of Human Rights after 1948, following the war and the Holocaust. But it never happened. And now, she sees the pillars of the world order teetering everywhere.

Merkel Harbors No Illusions about Trump

Donald Trump? For her, he is a man who has turned back the historical clock to zero hour and casts doubt on everything that has united the West for decades: NATO, trade agreements and the United Nations. Many in the German government had hoped that Trump wouldn't be so bad once he was actually sworn in. But Merkel is no longer under any illusions. Trump is implementing his campaign promises, no matter how asinine they might be, as if going down a checklist. Last week, he made good on his pledge to impose punitive tariffs on aluminum and steel from Europe.

Vladimir Putin? A president who was once full of admiration for the West's performance, but at some point realized he would never be able to trigger an economic turnaround in his country and is now fully committed to brute force and repression, in Ukraine, in Syria and in Russia itself.

China? Proof that it is not impossible to reconcile a dictatorship with a market economy. Europe? Quarrelling, weakened by Brexit and paralyzed by agonizingly long decision-making procedures.

If there is one thing Merkel cannot be accused of, it is sugar-coating reality. Listening to her is sometimes a rather frightening experience.

But: What are the consequences?

Karl Marx once wrote that philosophers have only interpreted the world, in various ways, but that the point is to change it. If that is true, then Merkel is clearly a philosopher: She has never been one for grand plans. Still, as her career approaches its twilight, it is becoming increasingly apparent that her analysis of the situation in which we find ourselves, which could hardly be gloomier, is increasingly at odds with her practical approach to politics.

In the fall of 2016, Merkel evidently seriously considered withdrawing from politics. People she spoke to at the time say it was almost painful to see how coldly and soberly Merkel assessed her own situation -- the hatred she now provokes and the weariness that a long run as chancellor inevitably brings with it, especially in the age of instantaneous new media.

If Hillary Clinton had won the election in the U.S., Merkel would not have run again, says one person who speaks with her on an almost daily basis. But that didn't happen. In his new book about his years in the West Wing, former Barack Obama adviser Benjamin Rhodes writes that Merkel felt obligated to defend the free world order in the wake of Trump's victory.

And, for a moment at least, it seemed as though she really was serious about it. In the middle of the 2017 election campaign, in a beer tent in Trudering in Bavaria, Merkel said a sentence of tremendous significance: Europe, she said, must now take its fate into its own hands. It was a farewell to the postwar order in which Europeans could always rely on their big brother in America when things got uncomfortable.

But there was a strange lack of seriousness in Merkel's words, and it wasn't just because they were spoken in a beer tent. Merkel's speech was also a product of the election campaign: In those early summer days, her rival Social Democrats were hoping to present Merkel as a Trump lap dog, a plan the chancellor cleverly thwarted.

A Lack of Passion

She has since repeated the sentiment she uttered in Trudering several times. But she doesn't seem passionate about it. On Sept. 26 of last year, two days after Germany's national election, Emmanuel Macron gave a speech at the Sorbonne in Paris in which he presented a comprehensive plan for reforming Europe, culminating in the sentence that boldness was the only answer to today's challenges.

Berlin remained silent about that speech until this weekend, and even then, Merkel offered little. For months, Macron had only known what Merkel didn't want. And the chancellor's criticism of the French proposals is by all means justified. An EU budget designed to cushion economic risks with "asymmetric shock absorption," as Merkel likes to say in a mocking tone, can of course be seen as an invitation to Southern Europe to abandon all efforts at reform. And Macron also knows how to package vested French interests in the cloak of Europe's great will to assert itself, as the current dispute over how to deal with American punitive tariffs shows.

But skepticism is not the same thing as a plan. Merkel currently finds herself surrounded by men who know exactly what they want. Macron wants to provide a new face for Europe, Trump wants to subordinate the world to the interests of the U.S. and Putin wants to restore the hegemonic splendor of the Soviet Union in Russia.

And Merkel? In the spring of 2015, political scientist Herfried Münkler published a small volume titled, "The Power in the Middle." In it, he argues that Germany must finally find its way out of the niche of global politics. "If Germany fails in the duties of the central European power, Europe will fail," Münkler wrote.

That's the danger now. Merkel's great strength has always been finding a compromise in complicated negotiations that everyone can live with in the end. That's how she restored calm, first during the financial crisis first and then in the course of the euro crisis. But the limits to this strategy became apparent during the Ukraine crisis. Merkel did manage to prevent an escalation, in and of itself no small feat, but all the negotiations on lines of contact and observer missions were also something like occupational therapy for German foreign policy, which to this day still doesn't want to admit that Vladimir Putin has no interest in lasting peace.

Merkel, it was said after Trump's election, had become the leader of the free world. But that's nonsense. She's a hardworking politician who has been around for ages and everyone knows her -- from the Saudi crown prince to Li Xi, the party secretary of Guangdong Province, with whom she had lunch a week ago Friday. They all appreciate her detailed knowledge, intelligence and patience. Yet like any leader who has been in office for a long time, Merkel is particularly good at explaining what is not possible.

A Silence that Fuels Apathy

If Europe really wanted to take its fate into its own hands, it would be a good idea to create a European rapid response force that could intervene quickly in crisis situations. Macron proposed precisely that during his Sorbonne speech and Merkel supports the idea in principle. But a precondition establishing such a force would be limiting the German constitutional requirement that the federal parliament, the Bundestag, must approve all foreign deployments of the country's armed forces. Merkel does not currently have a majority in parliament to make that change. And that's how she views it.

In her thoughts, Merkel is actually more revolutionary. She feels everything needs to move much faster, in Europe and in Germany, which can't even manage to build an airport in its capital city -- in stark contrast to a China that can build entire metropolises from scratch within just a few years. During her trips to China, there is always a hint of appreciations for the Chinese government, which isn't burdened by protracted planning approval procedures and where no politician is forced to laboriously explain himself to the citizens. China is governed from the top down.

Something has to happen, Merkel said with concern as she traveled back to Berlin, impressed by the drive of Beijing's leaders. And then, in the same breath, she went on to explain why nothing could happen: because her hands are tied by German federalism, by the center-left Social Democrats in her government, and by the CSU, which often acts as more of an adversary than as a sister party.

Merkel says she doesn't lead by speeches and appeals. She acts as if it's a German virtue to reach your goal without much talk. But the truth is that she shirks the work of finding the right words to rally people around ideas that don't yet have majority support.

Could Brandt's détente policy have existed were it not for great speeches? Or German reunification? One of the traits of the late Merkel era is that the chancellor's own silence fuels the very apathy that she so deeply laments. 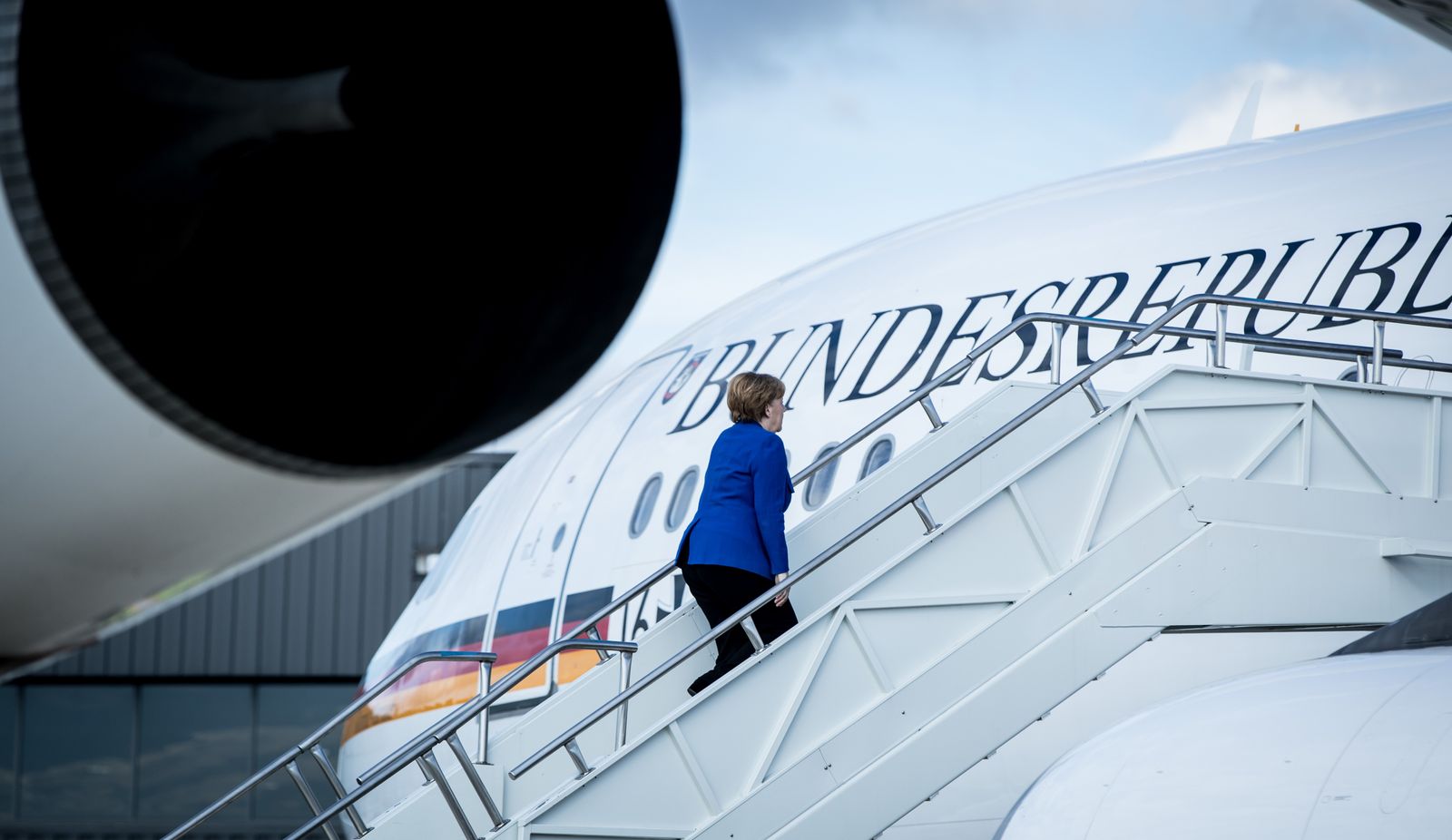