Following Friday morning's compromise deal at the European Union summit in Brussels, a number of politicians in Berlin sought to delay a key vote on euro rescue efforts planned for Friday night. They are angry over changes to the agreement, which now eases bailout conditions and also calls for the permanent euro bailout fund to provide direct recapitalization for shaky banks.

Members of Germany's opposition, the Social Democratic (SPD) and Left parties, as well some politicians within Angela Merkel's own coalition partner, the Free Democrats, called on the chancellor to delay the vote on ratifying the permanent euro bailout fund, the European Stability Mechanism (ESM), and the fiscal pact.

"The open question now is whether or not we can vote on the ESM today or if that is not the case," said Carsten Schneider, the SPD's budgetary policy spokesperson.

Jürgen Koppelin, a member of the Free Democratic Party, called for a delay in Friday evening's planned vote to okay funds to shore up the ailing euro, saying his party did not want to see the watering down of the criteria Merkel agreed to Friday morning in Brussels. "The position of the FDP up until now has been that the criteria cannot be eased," he said. "Talks within the coalition are necessary."

"My immediate advice is to postpone the vote until next week and not to hold it now," he said.

Another member of his party, Frank Schäffler, added: "The ink isn't even dry and the substance of the ESM treaty is already being changed." The critic also added that in addition to having to bail out German banks, taxpayers in Germany would now be held liable for banks in other countries. "Things are moving closer and closer to a transfer union," he warned.

With her own Christian Democratic Union (CDU) Klaus-Peter Willsch warned that the ESM is on the path to becoming the "biggest bad bank in Europe." He also criticized an easing of lending conditions to euro-zone countries in the future, saying Italy and Spain should not be given something for nothing.

The opposition, center-left SPD is also angered that Merkel agreed to allow troubled banks to directly tap into the fund in the future. The earlier agreement required that the funds be channelled through governments first.

Germany still hasn't ratified the ESM and a joint vote on both the permanent euro rescue fund and the fiscal pact had been planned in both Germany's parliament, the Bundestag, and the upper-legislative chamber, the Bundesrat, on Friday night. Even if both chambers approve the legislation, it is not expected that the treaties will be ratified -- at least for a few weeks -- following a request by Germany's highest court to the country's President, Joachim Gauck, asking him not to sign it into law until it can complete a legal review. At least 12,000 complaints are expected to be filed with the Federal Constitutional Court if the ESM and the fiscal pact are approved by parliament.

In recent days, Merkel has sought to build a two-thirds majority of support for the legislation in the hopes that such support make the treaties more resistant to any challenges at the constitutional court. German news agencies reported Friday afternoon that passage of the bill was still likely, with the hoped for two-thirds majority, despite the compromises agreed to in Brussels.

Despite calls for a delay in the vote, Merkel's CDU is staying firm and pushing for a Friday vote. FDP General Secretary Patrick Döring said he sees no reason to delay the vote, though others in his party are clearly annoyed.

At a press conference held earlier in the day, Merkel defended what is being seen as her caving in to Spanish and Italian demands to ease borrowing restrictions on a euro bailout fund and allow banks to directly receive assistance.

"We remain entirely within our prior formula: give and take, conditionality and control," Merkel said on Friday morning. "And, insofar, I think we have done something important, but have also stayed true to our philosophy -- no benefit without a trade-off."

Merkel also said the details of the bank aid would still have to be hammered out by Europe's finance ministers. "The details about liability," Merkel said, "still have to be negotiated individually, and I can predict now that they will be quite difficult negotiations because we are in a new area, and for that reason it won't just take only 10 days."

In Brussels, Merkel also got backing from Lithuania's president. "Without memorandums of understanding, member states and banks in the EU will not be helped. So that balance between help and financial assistance, responsibility and control today is achieved," Dalia Grybauskaite noted.

The deal materialized only after Rome and Madrid blocked their approval of a European Union decision on a €120-billion ($161 billion) growth plan.

"We moved together. The best way to make others move is to move yourself," French President Francois Hollande added. "We took an important step yesterday and overnight." 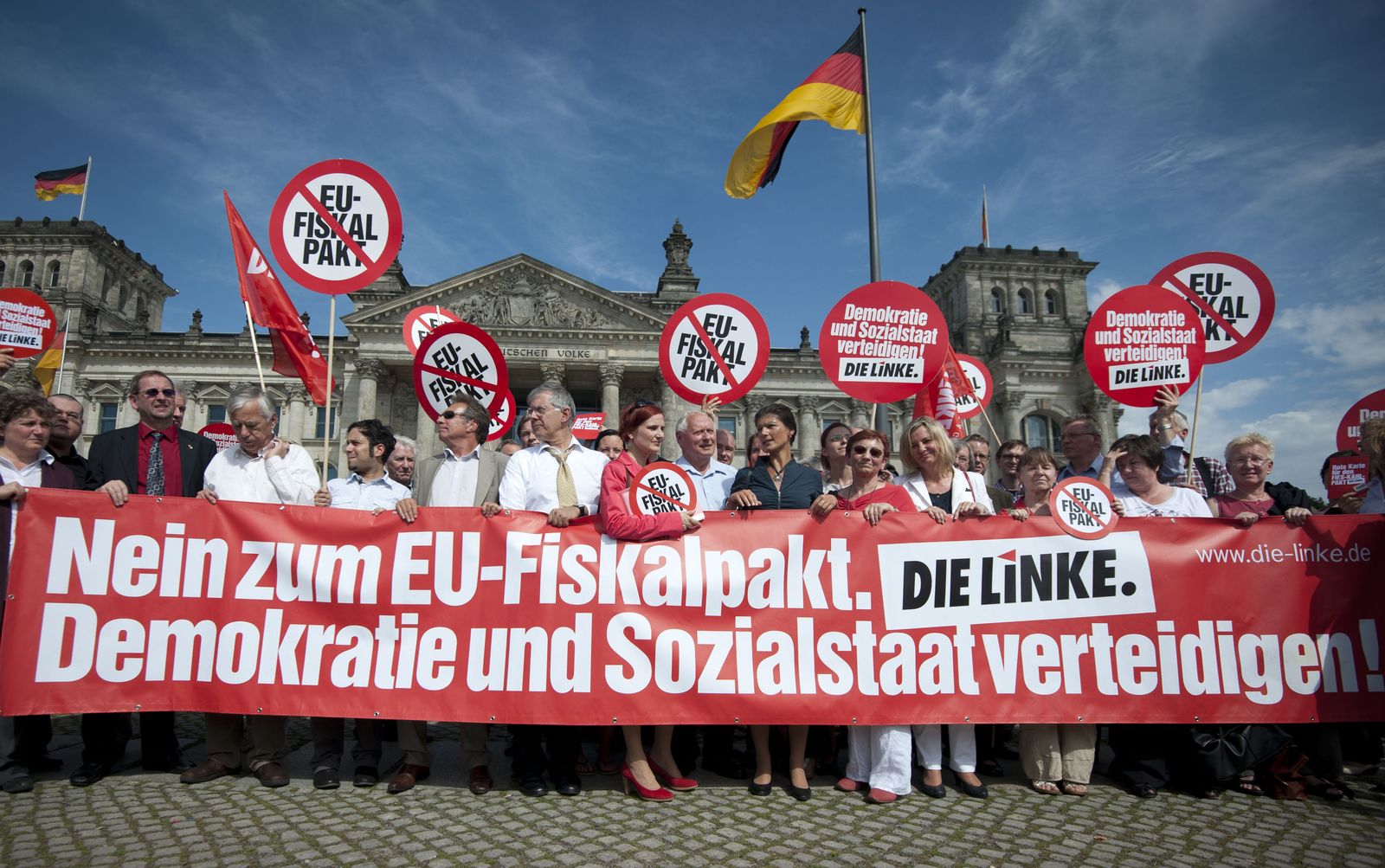 Members of Germany's Left Party protest against the EU fiscal pact before a planned vote to ratify the treaty in parliament on Friday.