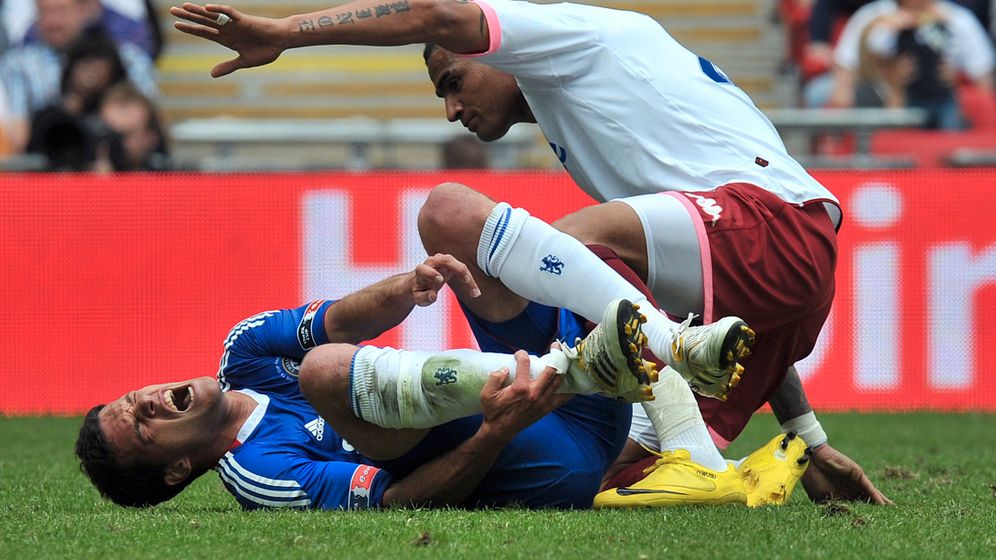 Michael Ballack, the captain of Germany's national soccer team, has been ruled out of next month's World Cup in South Africa because of an ankle injury he sustained in a match on Saturday, the German Football Association (DFB) said on Monday.

The loss of one of the team's most important players is a major blow to Germany's hopes of success in the tournament. Ballack underwent a scan in Munich on Monday which found a tear in an ankle ligament. The 33-year-old Chelsea midfielder was injured on Saturday when he was fouled during Chelsea's 1-0 victory over Portsmouth in the English FA Cup final. The ankle had been too swollen to be scanned until Monday.

The Portsmouth player who fouled Ballack, Kevin-Prince Boateng, plays for Ghana, which faces Germany in the World Cup on June 23. "It looked intentional," Ballack said after the foul. Boateng got a yellow card.

Responding to the diagnosis, German national team coach Joachim Löw said: "We're shocked, no doubt about that. We must now bundle all our strength. There's no question of any resignation about this. We're convinced that we will play a good World Cup."

Ballack said: "I'm obviously angry. This is of course a huge disappointment. It's a blow if one gets such a diagnosis two or three weeks before a World Cup. But that's football and life goes on."

The DFB said on its Web site that Ballack was likely to make a full recovery but that it would take at least eight weeks for him to resume training. The World Cup runs from June 11 to July 11.

"The tomography showed a rupture of the cruciate ligament and a partial rupture of the syndesmosis at his right ankle, which will be immobilized in a cast," the DFB said.

Ballack has been a mainstay in the national team since the 2002 World Cup. He has played 98 matches for the team, scoring 42 goals.

Germany has won the World Cup three times and is renowned for its success in international football tournaments due to a mixture of luck, skill, and ironclad nerves in penalty shootouts.

Boateng's father, Prince Boateng, defended his son. "I don't think he intentionally injured him," he told SPIEGEL. "But I'm sorry for German football."