The activist says that he and his associates were prompted to act by revelations in early November that a neo-Nazi terror group calling itself the National Socialist Underground (NSU) had apparently murdered at least 10 people in a seven-year killing spree. The activist is hard to get a hold of. For him, speaking on the phone is too risky, and emailing even more so. Instead, he prefers to communicate via encrypted online chats.

A little over a week ago, he and some friends launched a new Internet portal, nazi-leaks.net (German only), advertising it as "Operation Blitzkrieg." The site aims to publish hacked confidential data, much like Julian Assange's whistleblowing platform WikiLeaks. But, in this case, the platform is a place for amassing confidential information about the far-right scene in Germany.

During an online chat, the anonymous activist says that there is a team of "five to 10" individuals behind the platform, and that they have brought together several data sets, many of which have previously been published elsewhere. These have included the names of alleged donors to Germany's far-right National Democratic Party (NPD), internal NPD emails, a list of contacts from the right-wing weekly newspaper Junge Freiheit and customer data from neo-Nazi online stores. The activist adds that he and his associates decided "it would be appropriate to simply offer everything in one central place."

When asked who is behind this campaign and what the group aims to achieve, the activist simply types "We are Anonymous" before signing off.

Computer activists and hackers working as part of the loose-knit collective called Anonymous have been making headlines for years. But Operation Blitzkrieg marks the first time that individuals associating themselves with the group have launched a large-scale campaign specifically against targets in Germany.

One of the first Anonymous campaigns targeted the Church of Scientology. Over time, the group has grown to become an international online protest movement with many voices, all of which remain true to the mantra that "anyone can be anonymous." But one of the consequences of this open, decentralized and fluid structure is that an increasing number of people have adopted the group's name and symbols when conducting radical and sometimes almost militant campaigns. In fact, the movement is becoming broadly synonymous with digital vandalism of all stripes.

Until recently, a project like nazi-leaks.net wouldn't have quite fit the activists' profile. The Anonymous movement's established method of protesting had been a modern version of sit-ins or street blockades: They paralyzed websites by using a simple program that sends a huge volume of pointless inquiries until their servers are shut down, in what are called denial-of-service (DOS) attacks.

In December 2010, the group attracted significant attention as well as a certain degree of appreciation. At the time, US-based companies including PayPal and Visa had been refusing to process donations to accounts owned by WikiLeaks, controversial in the US owing to its publication of US diplomatic cables. To retaliate, members of the hacker collective promptly launched Operation Payback, which temporarily paralyzed the websites of the financial service providers.

Early last summer, some activists pressed for an even more militant approach. To them, it was no longer enough to merely put their victims' websites out of action. They split off into a hacker group called LulzSec, which actively penetrated company computers and posted the raw data it had captured online.

This "hack and leak" method has apparently become acceptable within the Anonymous movement, because it is exactly what happened in late December, when they triggered an uproar by attacking US-based global security group Stratfor. Just last week, more than 800,000 usernames and passwords obtained in the attack, as well as the credit-card data of tens of thousands of people, were published in the name of the collective. Since many users have the same password for various services, this inevitably opens the door for further abuse.

It would also appear that the collective approves of Operation Blitzkrieg. The operation -- and links for accessing the data it has collected -- can be found on the long lists of Anonymous operations currently ongoing around the world.

But this trend toward increasingly aggressive actions is costing the movement the respect it had earned among the online community through campaigns such as "Operation Syria," against the Syrian government, and Operation Payback.

This has nothing to do with the targets that have been selected, since members of the scene certainly view neo-Nazis as fitting targets for hacker attacks. At issue are their methods, particularly the publication of unfiltered private information that serves no obvious public benefit. And this while shielded by a mask without taking responsibility for their actions.

The German Federation of Journalists (DJV) has criticized the collective's lack of journalistic rigor. The group has even been condemned by "Netz gegen Nazis," or "Net against Nazis," an online portal run by the Berlin-based Amadeu Antonio Foundation, which aims to combat right-wing extremism and racism.

Meanwhile, members of the established hacker community already have rather critical views of Anonymous. For example, among the eight basic "hacker ethics" of the Chaos Computer Club, an influential German hacker organization, is the motto "exploit public data, protect private data."

During the chat session, the informal spokesman for nazi-leaks.net admits that some of this is "justified criticism." He says that the group "will also improve the filters," and that some data has "already been ignored because it could not be verified." Still, the group has no regrets about its actions and plans to carry on with them. "There's more to come," he writes, adding that some of the group's targets will also be outside of Germany.

In the meantime, there is growing resistance to such actions on the Internet. Since last week, there have been calls in right-wing online forums for retaliatory attacks against nazi-leaks.net. Instigators are adopting not only the methods of Anonymous, but also its rhetoric, dubbing their effort "Operation Takedown." 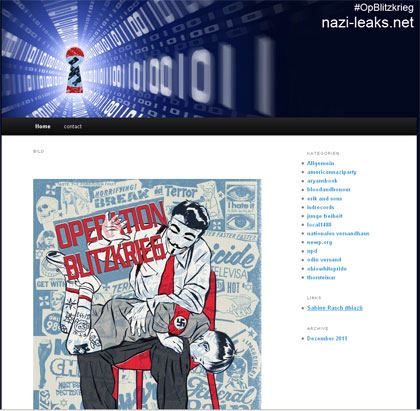