Germany's center-right has long been in a luxurious position. Whereas conservatives across Europe have been struggling in recent years with the rise of right-wing populist parties eating into their base, Chancellor Angela Merkel's Christian Democrats have had little to worry about. Though the German left is splintered among three, or even four, parties, the right is a monolith. There is the CDU, its Bavarian wing known as the Christian Social Union, and its favorite coalition partner, the Free Democrats (FDP).

But this election year is different. With thebirth of the anti-euro party Alternative for Germany (AfD), Merkel is facing competition from within her own clientele. Furthermore, though her preferred strategy has been that of maintaining complete silence about the AfD so as not to lend it credibility, there are many in Merkel's party who disagree with that approach. And they are increasingly giving voice to their displeasure.

"To imagine that nobody will talk about the AfD if we avoid talking about them would be a fatal conclusion to draw," says Wolfgang Bosbach, a senior CDU member and chair of the Internal Affairs Committee in German parliament. The party, he says, has to confront critics of the euro "with well founded arguments."

Bosbach was quoted in the Monday edition of SPIEGEL in an article that also included details from a paper written by CDU leaders from a trio of German states protesting against the party's strategy in dealing with the AfD. The authors of the paper urged the CDU to "take the new party seriously" and to engage it in a debate on the issues.

Merkel was furious. In a Monday party meeting, she complained bitterly about the critique reported on by SPIEGEL and took the authors of the paper to task. "We are both older than 18," she snapped at one of the renegade party members, according to meeting participants.

Her touchiness is understandable. For months, the CDU and the FDP have sought to ignore the Alternative for Germany in the hopes that it would simply disappear as so many anti-euro movements have in the past. Instead, though, the party has quickly grown. Earlier this month, it surpassed the 10,000 member mark -- just seven weeks after its official founding -- and it has attracted widespread interest among the German electorate.

More worrisome, significant elements within Merkel's CDU have grown uncomfortable with massive bailouts of heavily indebted euro-zone member states, with several conservative lawmakers either abstaining or voting no on aid packages in German parliament last year. While no parliamentarians have yet abandoned the CDU, the Alternative for Germany has proven adept at attracting lower-ranking CDU and FDP members. Just last week, a state lawmaker with the FDP in Hesse named Jochen Paulus switched parties.

Many see the AfD as a political home representing what German conservatives used to stand for, before Merkel moved the CDU to the center in recent years. And before the euro crisis forced Berlin to embark on the expensive path of saving the common European currency. While most Germans remain favorable toward the euro, a significant number are not -- and many of them are political conservatives.

The fact that AfD head Bernd Lucke is a professor of economics, with many of the other founders working as economists, academics, lawyers or business leaders, has also helped. For one, it lends the party the aura of respectability and expertise. For another, it has helped the party to quickly navigate the various bureaucratic obstacles for establishing a party and getting on the ballot. Furthermore, even as there have been some complaints that the party has not done enough to clearly define its right-most boundary, the AdL has not emerged thus far as a home for racists and Islamophobes. Party leadership has also been careful to keep a tight rein on the kind of cranks who often plague new political movements, even if that has meant strict limits on grassroots influence on strategic decisions.

Still, despite the early successes, few pollsters believe that the party will be able to leap the 5 percent hurdle necessary for representation in German parliament. But even a result of 2-3 percent would be more than respectable. And more to the point, with the FDP likewise struggling to attract sufficient votes to surpass the minimum, any supporters lost to the AdL could prove dangerous for Merkel's re-election ambitions.

That, in short, is why the CDU is nervous. "You only have to see the television images from AfD events to see that they could easily be our people," says Michael Fuchs, an economic expert within the Christian Democrats.

The FDP is likewise growing concerned. Whereas the CDU's coalition partner in mid-April saw the Alternative for Germany as being primarily a problem for Merkel's conservatives, that view is slowly changing, particularly after Matthias Niebel, cousin of long-time FDP General Secretary Dirk Niebel, who is currently Merkel's Development Minister, switched from the FDP to the AfD earlier this year.

"The FDP has to take the AfD much more seriously because its message is one that is dangerous for the coalition," says Frank Schäffler, a senior FDP official in Hamburg. "You can't simply launch heavy-handed attacks and you certainly can't ignore them."

Given the AfD's central plank, a pledge to withdraw Germany from the European common currency zone and reintroduce the deutschmark, challenging the party wouldn't be difficult, say many politicians and economists. Were the euro zone to collapse, Germany's currency would appreciate dramatically, with exports becoming 30 percent more expensive virtually overnight, they say. An economic crisis and significant unemployment would be the result. The paper written by the CDU leaders from three German states proposes using such arguments to publicly challenge the AfD.

There were indications on Monday that, despite Merkel's anger, the conservatives might be considering doing just that. In a press conference following a meeting in Berlin, CDU General Secretary Hermann Gröhe insisted that there was no internal conflict within his party.

He then proceeded to hold forth on the dangers associated with leaving the euro. 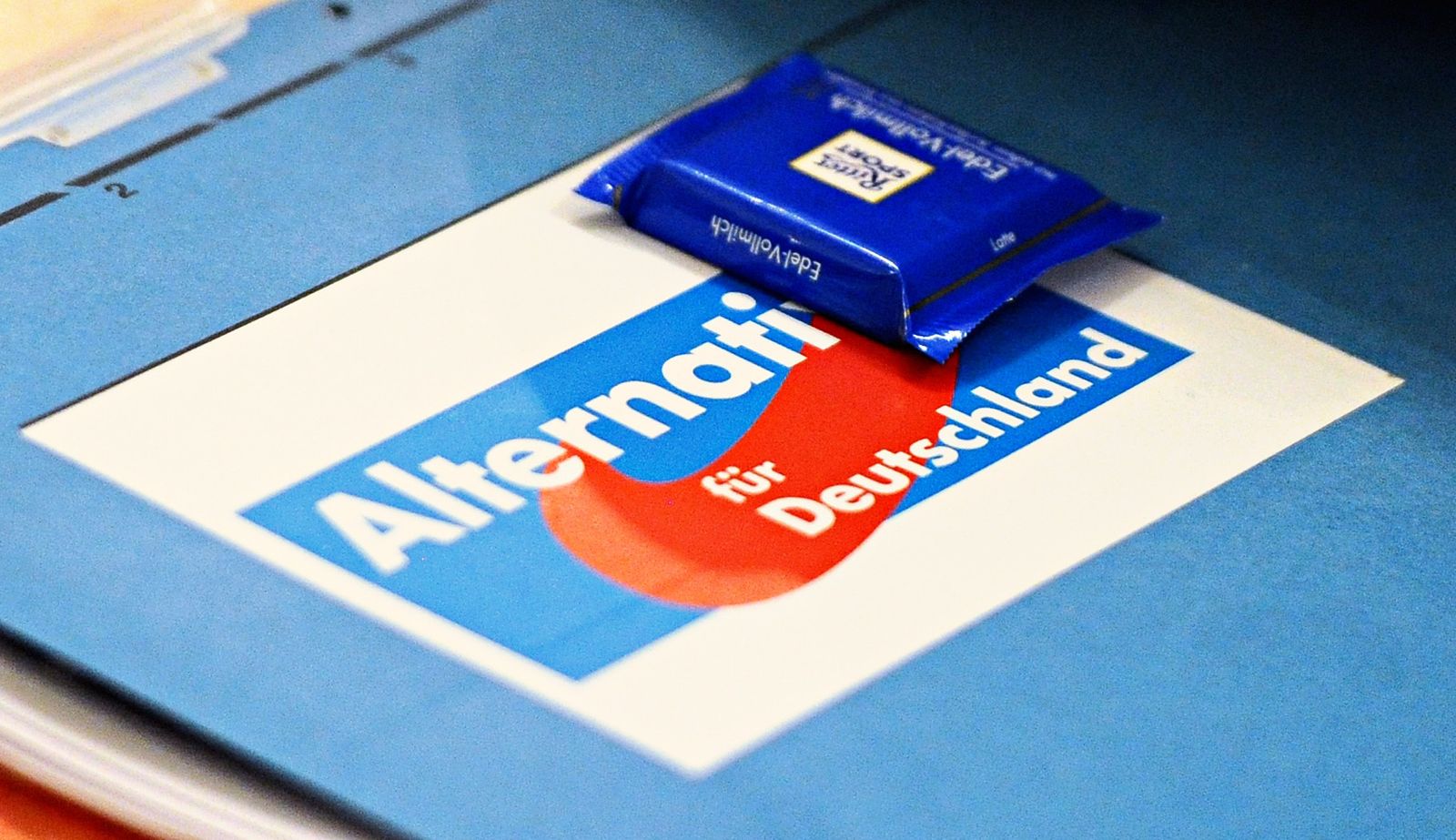 The new anti-euro party Alternative for Germany has become a danger for Merkel's re-election campaign.