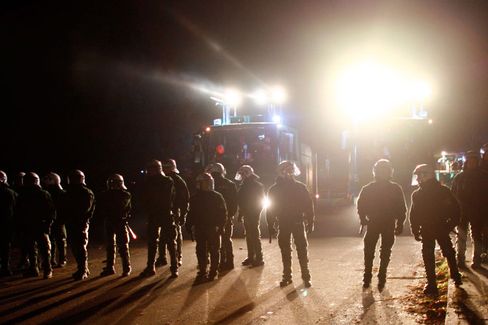 German riot police confronted activists along the route of the nuclear waste transport.

Eleven trucks carrying radioactive waste from German nuclear power stations arrived a day late at their destination, a storage site near Gorleben in northern Germany, early on Tuesday morning after thousands of anti-nuclear activists tried to stop the convoy.

The protests were far stronger than during the last nuclear shipment to Gorleben in 2006 and are a response to growing calls from the ruling conservative Christian Democrats and from German industry to reverse the decision to phase out the country's nuclear power stations in the next 15 years.

At the weekend more than 15,000 people took part in the protests which involved holding up the trucks with sit-down demonstrations, blocking the route with tractors and chaining themselves to concrete obstacles placed in the road.

About 1,000 protesters who blocked the entrance to the storage site had to be carried away Monday by riot police. Protesters also threw fireworks and shot signalling flares at a police helicopter.

Former Environment Minister Jürgen Trittin, a senior member of the Greens party, called the protests "a good response to the de facto abandonment of the nuclear phaseout by industrial companies that once signed up to it."

The activists urged the government to stick to the nuclear phaseout and announced further protests against plans to move all the waste accumulated at Gorleben from the storage facility to an underground salt-mine.

Germany is legally obliged by 2030 to set up a storage site where the waste can be safely kept for centuries, but the government has refrained from designating Gorleben as that site and hinted it might consider other locations. The issue remains unresolved.

The protesters, who reject nuclear power as unsafe, aim to draw attention to the issue by disrupting the shipments. The trip began at a reprocessing plant in La Hague, France, which encased the hot waste in glass to keep it inert for centuries. The next convoy is not expected at the storage warehouse till 2010.