It was supposed to be a carefree festival in Sahlkamp on the outskirts of the northern German city of Hanover. Billed as an "International Day" to celebrate social diversity and togetherness, the June celebration included performances by a multicultural children's choir called "Happy Rainbow" and the German-Turkish rap duo 3-K. Music from Afghanistan was also on the program.

But then the mood suddenly shifted.

When Hajo Arnds, the organizer of the neighborhood festival, stepped onto the stage at about 6:45 p.m. to announce the next performance, by the Jewish dance group Chaverim, he was greeted with catcalls. "Jews out!" some of the roughly 30 young people standing in front of the stage began shouting. "Gone with the Jews!"

The voices were those of children -- voices full of hate, shouted in unison and amplified by a toy megaphone. Arnds, the organizer, was shocked. He knew many of the children, most of them from Arab immigrant families in the neighborhood.

A social worker, Arnds tried using the tools of his profession -- words -- to save the situation. But his words were met with stones, thrown at the stage by people taking cover in the crowd. One of the stones hit a female Chaverim dancer in the leg, resulting in an angry bruise.

Arnds immediately cancelled the dance performance. Still speaking through the microphone, he said that he wasn't sure whether the festival could even continue after this incident. When adults walked to the front of the crowd to confront and talk to the children, they were verbally abused, and some of the teenagers ran away. The Jewish dance group was taken to a safe place, and the festival was allowed to continue. The last performance of the evening was by a duo singing Russian songs. "They're not Jews," one of the young people in front of the stage shouted, "so they can perform here." A criminal complaint was not filed with the police until several days later.

Until now, attacks on Jews, Jewish institutions and Jewish symbols have almost always been committed by right-wing extremist groups. In the first quarter of 2010 alone, the German Interior Ministry documented 183 anti-Semitic offences committed by right-wing radicals, including graffiti, inflammatory propaganda and physical violence.

The stone-throwing incident in Hanover, however, has finally forced the authorities to take a closer look at a group of offenders that, though largely overlooked until now, is no less motivated by anti-Zionist sentiments: adolescents and young adults from an immigrant community who are influenced by Islamist ideas and are prepared to commit acts of violence.

An informal and accidental alliance has been developing for some time between neo-Nazis and some members of a group they would normally despise: Muslim immigrants. The two groups seem to share vaguely similar anti-Semitic ideologies.

Right-wing extremists and Islamists, says Heinz Fromm, the president of the German domestic intelligence agency, the Federal Office for the Protection of the Constitution (BfV), are united by "a common bogeyman: Israel and the Jews as a whole." While German right-wing extremists cultivate a "more or less obvious racist anti-Semitism," says Fromm, the Islamists are "oriented toward the Israeli-Palestinian conflict" and support "anti-Zionist ideological positions, which can also have anti-Jewish and anti-Semitic overtones." Both extremist movements, says Fromm, "ascribe extraordinary political power to Israel and the Jews, and their goal is to fight this power."

Although the BfV has not separately identified anti-Semitic crimes associated with Islamist groups until now, investigators are paying close attention to the development of anti-Jewish tendencies within the milieu.

Anti-Semitism from the two groups shows itself in different ways in Germany. On the one hand, there are the efforts of extremist right-wing groups, which tend to follow a certain pattern. During a football match in April, for example, supporters of SV Mügeln-Ablass 09, a district-league football club in the eastern state of Saxony, chanted "a tree, a noose, a Jew's neck" and "we're building a subway, from Jerusalem to Auschwitz," until the match was stopped.

According to the German government's response to a parliament inquiry by Left Party politician Petra Pau, Jewish cemeteries in Germany are defaced, vandalized or destroyed about once every 10 days. Memorial sites are also frequently targeted. Last month, for example, extremists defaced a memorial plaque in the western city of Bochum, a Jewish cemetery in Babenhausen in the state of Hesse and a memorial in Beckum in the Münsterland region.

On the other hand, say BfV officials, Islamist ideologues are creating problems with their anti-Israeli tirades, which are being broadcast on the Internet and television. "You can expect this sort of propaganda to have an impact on certain social groups," says Fromm.

The Israelis' bloody military intervention against a flotilla of aid vessels off the coast of Gaza on May 31, in which nine Turkish activists where shot dead, has triggered a new wave of hate. The Jewish community in Berlin promptly reported "a rapid increase in anti-Semitic propaganda and death threats against Jews on the Internet." This is particularly the case on Facebook where, according to Jewish officials in Berlin, users like Ulubas L. are spreading their message of hate with statements like: "The only good Jew is a dead Jew."

TV productions like the Iranian series "Zahra's Blue Eyes," broadcast into the living rooms of immigrant families in Germany, only add to the problem. The program is based on a horror story in which a fictitious Israeli general has doctors remove the eyes of a Palestinian girl so that they can be transplanted into his blind son.

Such propaganda apparently serves as a breeding ground for anti-Jewish sentiments among poorly integrated members of the immigrant community -- sentiments which can quickly explode into violence. In late June, for example, two Israeli tourists made the mistake of conversing in Hebrew at a Berlin nightclub. Another guest, apparently of Palestinian descent, asked them where they were from. When one of the tourists, a 22-year-old man, replied, "from Israel," the man attacked him and his companion.

The situation escalated when a Turkish-born bouncer intervened and attacked the Israelis with pepper spray. The tourists were able to flee and required medical treatment. Law enforcement officials assume that the attack was the result of "anti-Semitic sentiment." The bouncer and the man who attacked the Israelis, whose identity is still unknown, are being investigated for aggravated assault and battery.

The Jewish community in Worms, located in the southwestern state of Rhineland-Palatinate, was also the target of a recent attack. In mid-May, unknown assailants tried to set the city's historic synagogue on fire. Forensics experts later identified eight sources of fire at the crime scene. In addition, a Molotov cocktail was thrown through the window of the synagogue's library.

The community was lucky; the building did not go up in flames. Nearby, the police found letters claiming responsibility, written in broken German: "As long as you don't leave the Palestinians alone, we won't leave you alone." It is still unclear whether the pamphlets indicate that the perpetrators were Islamists or were left there as a red herring. According to the state's Interior Ministry, the authorities are "working hard to investigate all possible leads."

Meanwhile residents and social workers are trying to understand the background and motives of the adolescents who attacked Jewish dancers with stones at the "International Day" event in Hanover's Sahlkamp neighborhood.

There is no visible evidence of Jewish life in the district, which has about 14,000 residents. According to the police, the stone-throwing incident on June 19 was the first case of anti-Semitic violence in the area. So far, authorities have identified 12 possible suspects. They are between 9 and 19 years old, many are not yet old enough to be prosecuted, and 11 of them have an "Arab immigrant background," according to the public prosecutor's office in the city. No one has said anything yet on the possible motives for the attack. The only comments, so far, came from a little girl, perhaps 10 or 11 years old, who was addressed immediately after the attack by a woman attending the neighborhood festival.

"The Germans say: Foreigners out!" the girl replied. "Why can't we say: Jews out?" Then she ran away. 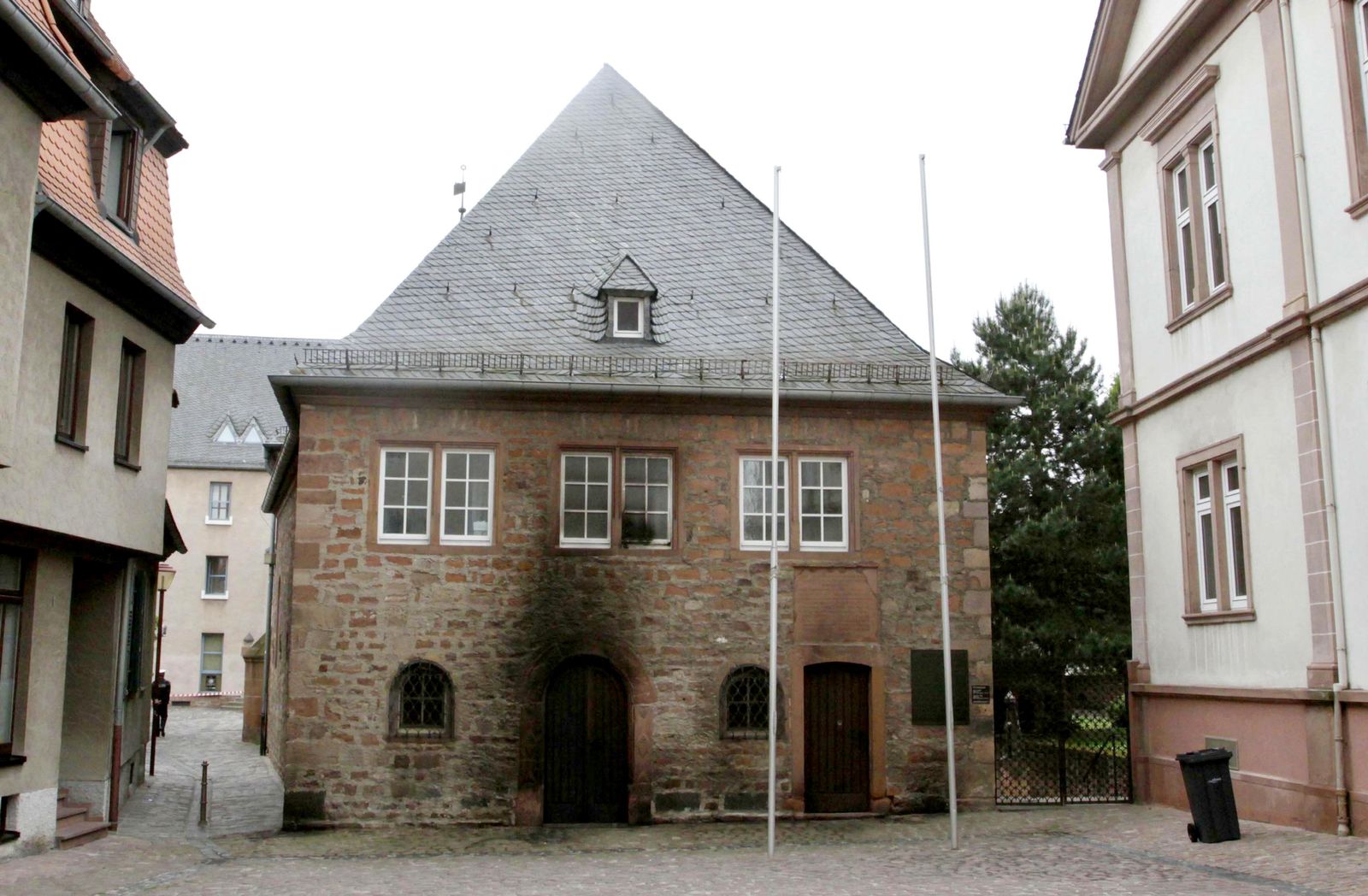 The synagogue in Worms became the target of an arson attack in mid-May. The authorities still don't know who was behind the attack.