The guest from Ankara was to be made to feel completely at home. Prior to welcoming his Turkish counterpart Mevlüt Cavusoglu to his home in the town of Goslar, located just north of the Harz Mountains, German Foreign Minister Sigmar Gabriel even took the step of buying a caydanlik, a traditional Turkish tea pot.

The fact that Cavusoglu referred to his host afterwards as a friend ("Dostum Sigmar"), however, wasn't just a product of Gabriel pouring the tea himself. Rather, the primary purpose of the meeting between the two ministers was to discuss the steps that each side could take to end the deep crisis that has befallen German-Turkish relations.

Recently, Ankara has begun sending early signals of rapprochement toward Berlin, and several innocent German citizens, imprisoned for no good reason, have been released, including human rights activist Peter Steudtner and journalist Mesale Tolu. But the most difficult case has yet to be solved: Deniz Yücel, the Turkey correspondent for the German daily newspaper Die Welt, has now been in jail for almost 11 months, without a single charge having been filed against him.

In Goslar, where Gabriel and Cavusoglu first met in private before inviting advisers in to join them, the German foreign minister once again demanded the release of the journalist, who holds both German and Turkish citizenship. Cavusoglu replied that he, too, is unhappy about the fact that there still haven't been any developments in the case.

But the guest from Ankara also brought along a wish list. At the very top was a controversial arms deal.

The Turkish government would like to upgrade its fleet of Leopard 2 battle tanks by providing them with better armor and a modern defensive system to protect them from smaller missiles and explosive devices. The improvements are aimed at eliminating one of the tanks' weaknesses -- a shortcoming that resulted in the Turkish army's having lost several tanks and troops in the battle against Islamic State (IS).

For months, Turkey has been in talks with the German arms manufacturer Rheinmetall about the enhancements. But without an export license granted by the German government, Rheinmetall isn't permitted to move ahead with the contract. And thus far, Berlin has refused to approve the sizeable deal. That, after all, would contradict the more stringent approach to Turkey that Gabriel announced on July 20 last year. "The more sizeable requests that Turkey has made have been put on hold," the foreign minister repeated in September.

In addition, Berlin has repeatedly said that it wasn't open to barter deals. Ankara, though, has repeatedly noted during the negotiations that it expects to receive something in return for releasing journalist Yücel. During former German Chancellor Gerhard Schröder's secret visit to Turkey shortly after the German elections last fall, Turkish President Recep Tayyip Erdogan proposed that Germany extradite several Turkish generals suspected of having participated in the failed coup attempt in July 2016. Essentially, it amounted to an indirect admission from Erdogan that he viewed imprisoned German citizens as political hostages.

The German government insists that it has consistently told Turkey that it would not be party to any "dirty deals." In theory. But in practice, the Germans know full well that Yücel's release would come at a price. It may not be a direct tit-for-tat, such as handing over a briefcase full of money in exchange for the prisoner. But "ultimately, both sides will have to pave the way to an agreement," says one diplomat. "Otherwise, the train will be delayed."

As such, it wasn't entirely inconvenient for Berlin that Cavusoglu brought up the desired Leopard 2 upgrades during his meeting with Gabriel. A short time later, the German foreign minister asked his staff to put the issue on the agenda of the next senior Foreign Ministry staff meeting along with instructions to reconsider the request from Ankara in a favorable light.

Officially, the German government would like the modernization of Turkey's Leopard 2 fleet to look like a "humanitarian obligation" to a NATO ally that is directly engaged in the fight against Islamic State. But the Turkish military in Syria hasn't been fighting IS for some time now -- it is instead concentrating its efforts there primarily on the Syrian-Kurdish militia YPG. Plus, if the upgrades were as unproblematic as Gabriel is trying to make them seem, they would have been approved long ago. Rheinmetall head Armin Pappberger first addressed the issue with the Economics Ministry way back on March 15, 2017.

The 'Trauma of al-Bab'

The 60-ton steel behemoths from Germany have been seen as the Turkish army's Achilles heel at least since the fiasco in Syria that took place in December 2016. That fall and winter saw the 2nd Armored Brigade take part in Turkey's Operation Euphrates Shield in northern Syria. By the time the fighting ended, according to claims that haven't been substantiated, the unit had lost 10 "Leos" in the fight for the Syrian city of al-Bab to anti-tank weapons and improvised explosives. Islamic State terrorists began using images of the burned-out tanks in their propaganda material.

Turkish military leaders were forced to realize that their tanks were no longer technologically advanced enough for a conflict against a guerilla army. In speaking to German military officers, Turkish generals have even referred to the incident as the "trauma of al-Bab."

The upgrades that Turkey now wants performed have already been integrated into newer iterations of the Leopard tank. Rheinmetall now installs a much thicker floor plate on its tanks, designed to protect occupants from so-called "hollow-charge mines."

The article you are reading originally appeared in German in issue 4/2018 (January 20th, 2018) of DER SPIEGEL.

But the Turkish military is most interested in an improvement to the turret, the tank's rotating cannon. Modern Leopard battle tanks include a so-called "hard-kill system." Using an array of sensors, the system is able to detect incoming anti-tank rounds and can then either fool them using decoys, much the way that airplanes defend themselves, or it can destroy them within a fraction of a second by intercepting them with an explosive projectile.

An additional trade-off that could be offered in the effort to free Yücel is the complete factory overhaul of Turkey's Leopard 2 tanks, including the installation of new weapons systems.

Even as Turkish diplomats have repeatedly established a link between the defense deal and the Yücel case, Gabriel continues to insist that there is no such connection. It seems almost as though the German defense minister is hoping that if he repeats that denial often enough, it will come true.

The two governments do agree, however, on the fact that their negotiations should not reach the light of day. This strategy, though, was foiled last Wednesday by none other than Deniz Yücel himself. In a written interview conducted via his lawyer with the German news agency DPA, Yücel said he doesn't want his freedom to be "tainted by tank deals involving Rheinmetall or by the activities of any allies."

Inside the German government, officials fear that by making the comment, Yücel may have guaranteed himself another six months behind bars. 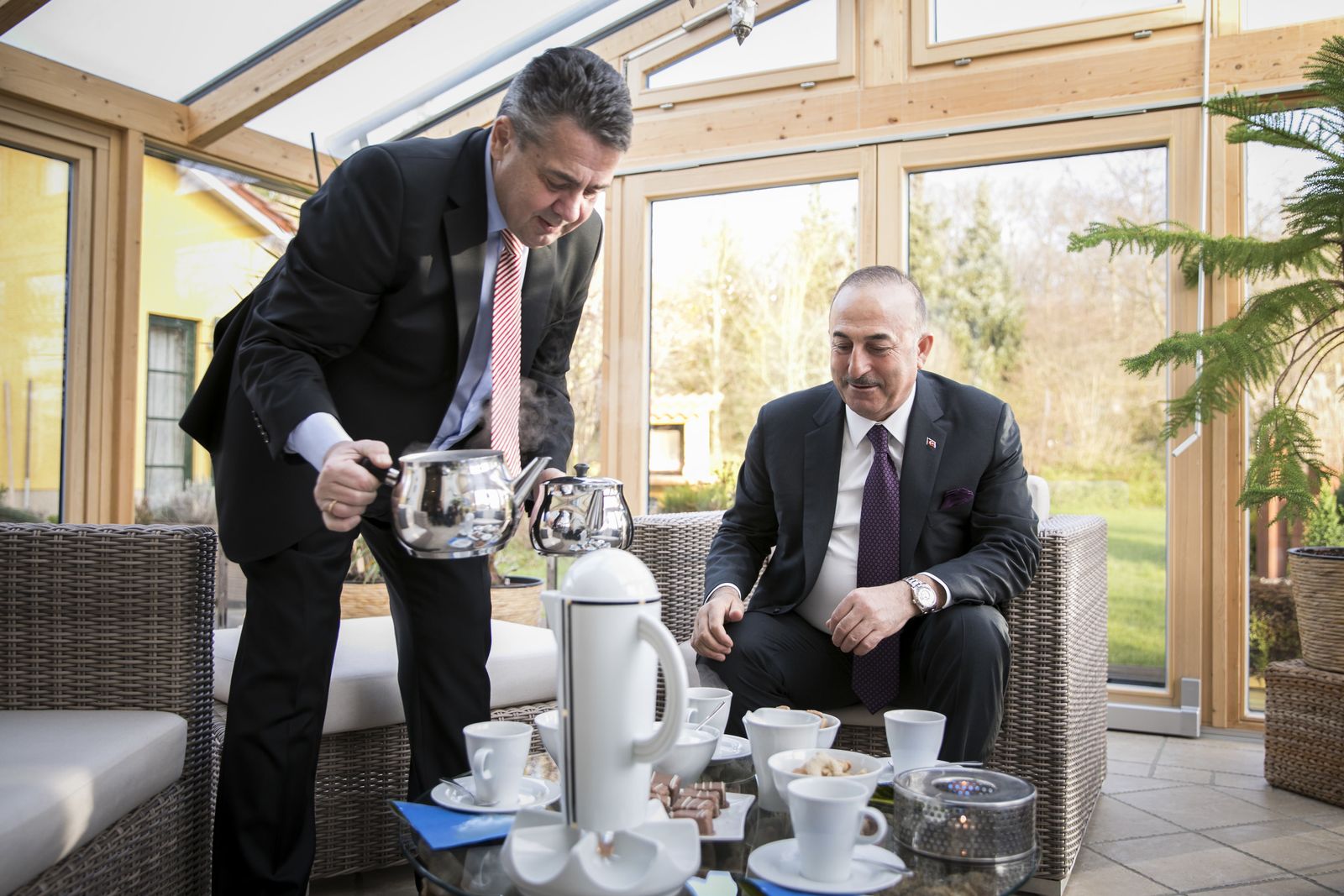 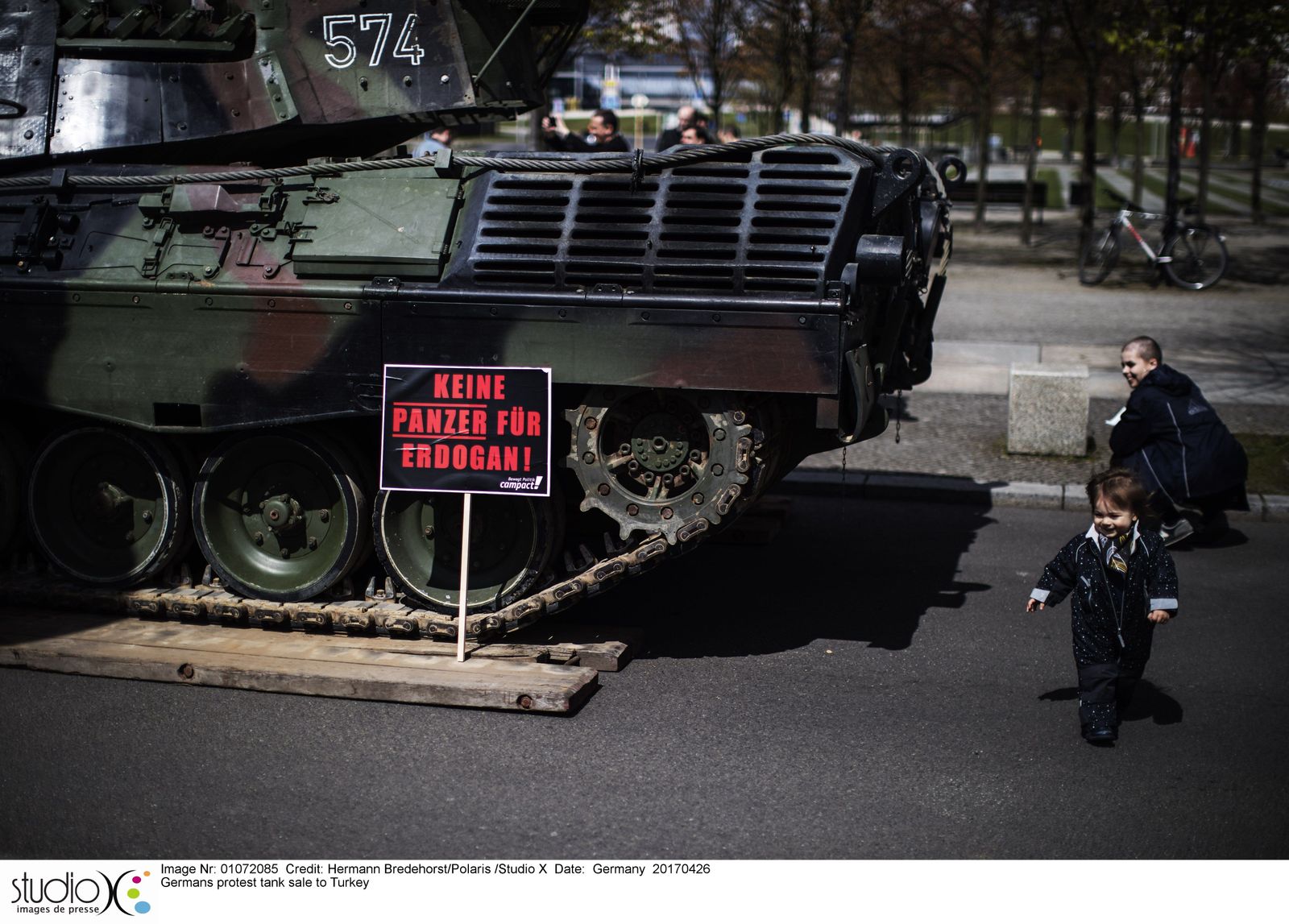 Activists in Berlin protest a possible weapons deal for Turkey. The sign reads: "No tanks for Erdogan."