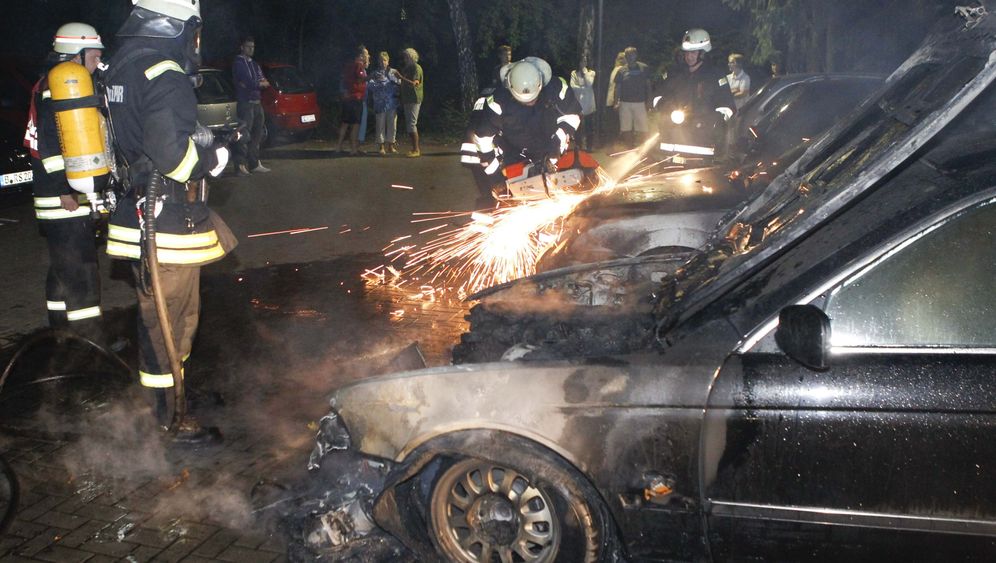 Erhart Körting, in charge of security matters in Berlin, isn't known as a careless man, but on Wednesday he uttered a sentence that may call his sanity into doubt. "I still park my car on the street in front of my house," he said.

The center-left Social Democrat obviously wanted to make a point -- that Berlin authorities won't be cowed by a rash of seemingly random car burnings in the German capital. But the numbers are alarming. After the senator for interior policy spoke on Wednesday night, nine cars were torched around Berlin. Thirty were damaged or destroyed by flames on Monday and Tuesday, about 15 per night, and authorities have made no arrests.

"We need hard deterrent measures," said Rainer Wendt, head of DPoIG, the country's second-largest police union, according to the mass-circulation Bild on Thursday morning. A security expert for the Social Democrats, Dieter Wiefelspütz, told the paper that automobile arsons were "a precursor to terrorism."

No one has been hurt so far, and no one has claimed responsibility. But burning upscale cars is a form of left-wing protest in some German cities, particularly Berlin and Hamburg. Authorities say 300 cars have been torched in Berlin since the start of 2011. The number of arsons over the last three days has been disproportionate, however, and authorities say the targets are not just luxury cars but also vans and delivery trucks.

Berlin's mayor, Klaus Wowereit, called the burnings "deranged vandalism" and said they amounted to "unacceptable crimes that must be prosecuted to the fullest extent."

They come at a very bad time for Wowereit's left-wing coalition of Social Democrats (SPD) and socialist Left Party members. Their campaign for a municipal election on September 18 has trundled along uneventfully, but the arsons may now threaten the incumbent government.

The two parties stand to gain nothing in a debate over burning cars: Wowereit's cabinet has failed to create a policy over the last few years against the crimes, which admittedly may be hard to prevent along the city's 5,400 kilometers (or 3,355 miles) of streets.

Investigators have also said in the meantime that the perpetrators may not be left-wing extremists alone. Because of the variety of targets, experts say, the arsons don't resemble an organized political protest -- they seem to be the work of random individual perpetrators.

Nevertheless, the latest car burnings have moved to districts such as Charlottenburg and Tiergarten. Until now, the most common settings for car arson had been the alternative eastern districts of Mitte, Prenzlauer Berg and Friedrichshain -- all of which have been undergoing steady gentrifiction in recent years.

The conservative Christian Democratic Union (CDU) -- Germany's main rival party to the SPD -- smells a campaign issue. The party is planning a new series of posters on security in Berlin, and on Thursday Wolfgang Bosbach, a Christian Democrat who heads a committee for interior security in the federal parliament, criticized Mayor Wowereit's performance.

"The terrorism of the Red Army Faction (or Baader-Meinhof gang, which bombed political targets in the 1970s) started with quote-unquote 'just' arson," he told broadcaster N24. "For this reason there is a danger that the violence could one day target people."