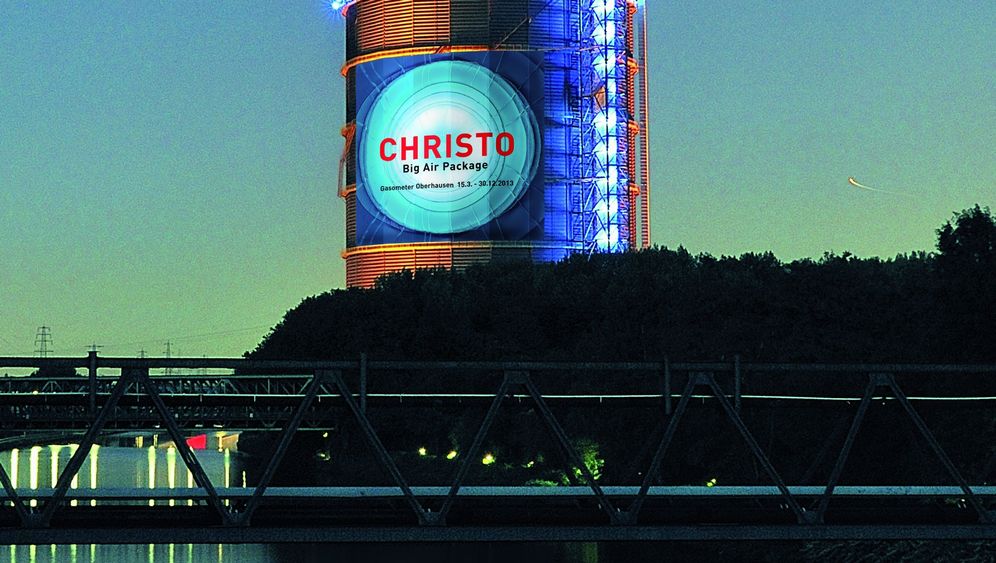 The exhibition space is enormous. Built in the 1920s, the Gasometer on the Rhine-Herne Canal in Oberhausen, western Germany, is one of the country's most astonishing industrial monuments. The former gas storage container is 117 meters tall and 67 meters wide (580 x 220 feet), towering over any people below. It was converted into an exhibition hall in 1993, but it has never been used to its full potential -- until now.

On March 16, what is likely to be the final installation in Germany by the American artist Christo will be opened to the public. Entitled "Big Air Package," the work is meant to be the largest inflatable object of all time. Its volume would rival the ill-fated Hindenburg blimp, still the largest airship ever created.

His most famous project in Germany to date was the 1995 "Wrapped Reichstag," when Christo and his wife Jeanne-Claude draped the entire German parliament building in Berlin in just under 100,000 square meters of fabric, which was covered by an aluminum layer.

The inflatable package, 94 meters high and 54 meters wide, of "Big Air Package" is made up of 20,350 square meters of specially made milky-white, translucent material the artist calls "ETex Christo." A specialty firm in the northern city of Lübeck spent 2,800 hours completing 12.5 kilometers (7.8 miles) of stitching. The 600 panels of fabric are to be held together by ropes and Velcro, which are meant to allow the 5.3-metric-ton formation to hold as much air as possible.

But all that is just numbers. And numbers can't describe the experience of stepping through the airtight revolving doors and climbing the stairs -- or better put, floating up them as if you were in the interior of a surreal rain cloud. Those who want to step into this transcendental space must make their way to Oberhausen. It's the kind of pull toward the heavens that people in the Middle Ages must have felt when they first entered a gothic cathedral and looked up.

"Religious? Me?" Christo says bewildered. "Oh, goodness!" He came to Oberhausen to talk about his "Big Air Package," not to answer "questions about politics, religion or the art of others."

Accompanying Christo are his ever-present house photographer and curator, Wolfgang Volz, a young art historian and his nephew, who is constantly on the phone and constantly filming. Christo's handshake is surprisingly weak, as if you're grabbing hold of a bundle of dry twigs.

Christo's long, thinning hair is its customary tangled mass of gray, and the look in his eyes is alert, even as his head droops lower and lower between his shoulders the longer he speaks in a conversation. Ever since his wife, Jeanne-Claude, died in 2009, he has been speaking and working for two. And it's taxing.

At one point, he briefly rests his forehead on the table. He says "we" and "us" when referring to their work together, which he wants to bring to an end. And just as if Jeanne-Claude were still alive and well, he speaks of her as an equal. "We are 77 years old now, and I don't know how much time is left," he says. "So, by promoting several projects simultaneously, we try to push things forward."

Shortly before her death, Jeanne-Claude said ominously: "Artists don't retire. They die." This explains why Christo wants to complete what they began together. Admittedly, all the drafts came from him. But executing those ideas was possible only with the oversight and persistence of his wife. "She just knows how to deal with people," Christo says. "I can't do that, but I have to try." The "things" that he wants to speed up are three final works of art that originated between him and his wife.

The first is "Over The River," a plan to drape large panels of silvery translucent fabric over parts of a 50-kilometer stretch of the Arkansas River in the western US state of Colorado. Christo speaks of the project with such euphoria that you would think his mere words could make it happen -- which may well be the case. "I stopped counting after more than 200 public hearings with local residents and opponents," he says.

All the bureaucratic hurdles have been cleared, but he's still accused of waging eco-terrorism on the area, which is part of a nature reserve. Despite that, and the project's cost of $50 million, "Over The River" could come to fruition by 2015. Plans began back in 1992.

Oil Drums Stacked in the Desert

The second project is much less of a hassle, even though its megalomaniacal dimensions cause it to surpass everything we once knew as "art." Christo wants to put 410,000 multi-colored oil drums in the desert sands of the United Arab Emirates, stacking them into what he would call the world's largest sculpture.

Its name, "The Mastaba," refers to a type of ancient Egyptian tomb that mimics one of the oldest geometric architectural models in the world. "Mud benches with this form would be found in front of the first houses our species built, 6,000 years ago in ancient Mesopotamia," he says. "Two vertical walls with a flat top, and two slanted sides at an angle of 60 degrees. It's a geometric form you get when you stack round objects."

The colossal construction is set to cost €300 million and will be taller and wider than the pyramids at Giza. The 10 colors, partially developed by German chemical company BASF, are meant to evoke the pointillism of Islamic mosaics. And unlike other projects by Christo, "The Mastaba" is supposed to stay standing as a monument to the oil-age of an oil-rich nation, designed by an artist who for 50 years worked mostly with polyester -- a product derived from crude oil.

And that's not supposed to be a political commentary? Christo shakes his head, letting his hair fly. "Today, art is illustration," he says. "It illustrates war, economy, nature, religion -- no matter what, it's all propaganda. These are not real things; they are only images of real things. All our projects are the real things. They are politics. It is the real water, real rivers, real fear -- not just an illustration of fear!"

Art Evolves from the Social Process

There are critics who call Christo's approach to art -- a fusion of land art and pop art, with a shot of surrealism -- outdated. Other critics more favorably assume that his works are akin to "social sculpture," the term coined by the German artist Joseph Beuys that refers to art's ability to transform society. Christo declines to argue with that assumption.

Sculptors create their art with stone, painters with a canvas. "Our art evolves from the social process, from the controversy with bureaucrats and farmers," he says. "These debates in the run-up are our material as well as the wind or the rain." In Oberhausen, however, there haven't been any problems -- which is why it's "only an installation," as Christo stipulates with a raised index finger. This makes "Big Air Package" sound as if it were only an apprentice piece, or another means by which to finance the other two projects. Almost everything has been paid for by Jeanne-Claude and Christo themselves.

But "Big Air Package" is much more. A final circle is coming to a close, and the giant inflated construction is a part of that. "In the past 50 years, we've realized 22 projects and failed to get permission for 37 more." Early on, the artist team was stacking oil drums on a street in Paris "and in a gallery on the Buttermarkt alley in Cologne," as Christo effortlessly recalls. They packed together objects, and the objects kept getting bigger -- so big that the artists would be perceived as only "packaging artists." They even built an air package for the German modern and contemporary art exhibition Documenta in 1968.

Just as Christo's time to finish his work is disappearing, so too, he says, is the world around us. "This is how the world is, this is how humans are," he says. "Everything that exists must disappear. Now, our art is something that basically cannot be owned, cannot be purchased, cannot be kept. It is ephemeral, and therefore it is free -- and it is beautiful."

Is that all it is, just beauty? Christo furrows his brow, as if not understanding the question. No, nothing more. What should it be? Then he smiles indulgently and says with a shrug: "Now it is there. Soon it will be gone." And that's all.

"Big Air Package" will be at the Gasometer in Oberhausen, Germany, from March 16 to Dec. 30, 2013. For more information, visit the Gasometer's website.