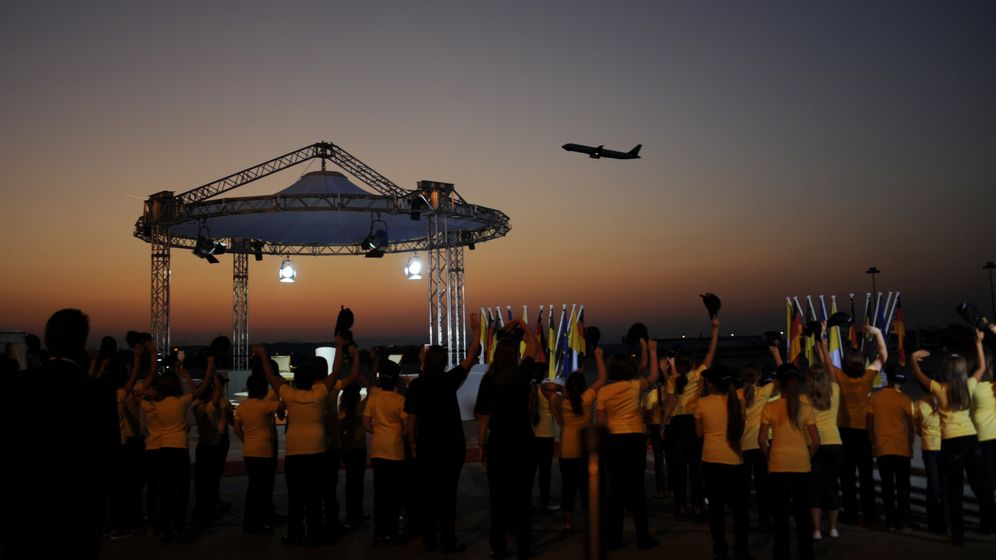 On Sunday the pope left Germany, his country of origin, to return to the Vatican. During his stay, he gave the German parliament a few things to think about, he gave an audience to Church abuse victims, he praised the Eastern Orthodox Church and he disappointed the Protestants. He also left behind numerous beautiful photos of himself in gold-flecked cassocks framed by a brilliant blue sky.

It was a packed, difficult trip. The pontiff put on his best performance, but did not manage to enter the good graces of his fellow countrymen.

If one scene could define Benedict's four-day Germany trip, it would be one that took shape on Saturday evening on a field in a Freiburg industrial area. Tens of thousands of young people held an overnight vigil until the big mass the following morning, the last of his trip.

The next morning, before Benedict arrived in his popemobile -- he was racing through Freiburg in a limousine, having just met with former Chancellor Helmut Kohl -- the young believers on the field were getting into the mood, having been given green and red inflatable clap sticks. In the style of a game show, the youths were told to use the different-colored sticks to express their opinions on statements made by two moderators, who were accompanied by a mediocre hobby band. If they thought the statement was true or "super," they held up the green stick. If they found it false or "not so great," they were to hold up the red stick.

The questions in the informal public opinion poll focused on issues that have been on the minds of young believers since well before the sexual abuse scandal rocked the country in early 2010. They were questions on how much trust they retain in their Church and its leaders in Rome.

"I model my life after standards set in Rome," the moderator said. No, the youth answered, holding up their red sticks, with hardly a green stick in sight.

"Confession doesn't play much of a role in my life," came the next statement, answered in the affirmative with a sea of green.

Then: "Women carry too little responsibility in the Church." Yes, unfortunately. Green bags shot up.

"Is the practice of homosexuality a sin?" Of course not. The youths raised their red sticks.

The young people had spoken: lots of red for Benedict, with hardly any green. It was an apt assessment of the 21st papal visit, before it had even come to an end. The Vatican journalists who'd tagged along on the journey seemed stunned. So much openness, discussion and criticism would be unthinkable back in Rome.

Finally, the pope rolled in to a few cries of "Be-ne-det-to." Some of the audience lit candles and allowed themselves to be taken in by the glamor of their shepherd. The German pope, the old man with the mild, alert smile, was once again "our favorite grandpa," as one poster read. But is that enough for the pope to win the hearts of the young pilgrims?

"What Will the Pope Take Away From Germany ?"

"I've experienced more impressive church services in my life," said one mother who attended with her four children, all of them acolytes. "The sermon seemed canned and not very spontaneous; there was no electricity, not even a little." When asked what she would take from the pontiff's visit, the woman said this wasn't the point. "The question must be: What will the pope take away from Germany?" she said.

Certainly Benedict will return to Vatican City with the sound of applause and praise in his ears, but also with criticism. The visit was no once-in-a-century event, certainly not a triumph like his visit to London last year, where the initial scepticism developed into wonder with a sort of folk festival in Hyde Park. What began with a measured, intellectual, thought-provoking speech to parliamentarians has ended with a disappointing meeting with Protestants in Erfurt and five large masses.

The lofty expectations of the Protestants, who had hoped to bring the two churches closer, were not fulfilled. In fact the visit left many simply marvelling at the 84-year-old's ability to handle such a gruelling schedule during the visit. "From a health perspective this trip was a real success," said his spokesman Federico Lombardi during the final press conference.

"This visit was a gift for German Catholics," said head of the German Bishops' Conference Robert Zollitsch, adding that one thing had become clear. "In places where the Church is young, it clearly has a future."

During lunch at a Freiburg seminary Benedict reportedly addressed the crisis of the German Catholic Church following the sexual abuse scandal. "Many leave the herd, but I know you're good shepherds," he said, according to Father Hans Langendörfer, who reported the pope left the country with the feeling he could trust Germany's bishops.

Meanwhile Italian journalists, who showed little interest in the dispute with the Protestants, published unsubstantiated reports of a sniper with an air gun who fired on the pope's security in Erfurt. And before the man's name or investigative protocols were released, and even as police released the suspect on lack of evidence on Sunday evening, they were already circulating the next rumor. After Benedict's brother Georg Ratzinger reportedly mentioned the pope's old age and weariness, there was word he might resign.

Nonsense, said his spokesman Lombardi, shortly before Benedict's departure. Around 7:30 pm on Sunday evening the pope boarded a Lufthansa Airbus and headed back to Rome.