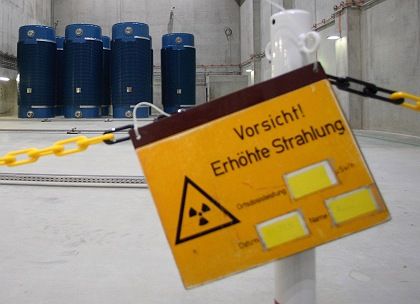 "Caution -- Increased Radioactivity": The German government is phasing out nuclear power, but it is still investing in research on nuclear safety.

The fact that the German government renounced nuclear energy in 2000 and pledged to take its last plant off the grid by 2020 might lead you to think that it would scale back its nuclear research programs. What, after all, is the point in spending money on developing a technology which is on its way out? However, the current administration seems reluctant to give up nuclear quite yet -- at least not totally.

German Research Minister Annette Schavan raised eyebrows this week with her announcement to DER SPIEGEL that she would increase research spending between 2008 and 2011 by up to €40 million. Most of the money has been earmarked for young researchers working on nuclear waste storage and nuclear security issues.

With the expansion of the research program, Schavan -- who has adamantly opposed the shutdown of Germany's nuclear power plants, arguing they are one of the best ways of reducing climate-damaging greenhouse gas emissions -- says she wants to ensure the country's competitiveness in nuclear technology and support future scientists.

"We cannot afford to neglect developing the next generation of scientists in internationally important research areas, otherwise we will fall behind the rest of the world," said Schavan.

Up until now, the Education and Research Ministry funded nuclear research programs with €30 million annually.

Environment Minister Sigmar Gabriel backed Schavan's stance. "I don't believe that anyone could be against further research in this area," he said, adding that it is of utmost urgency that Germany does not lose its competence in nuclear technology. Nevertheless, he said that the German government is still fully committed to a phaseout of nuclear energy.

Meanwhile, over at the Green Party -- which governed together with the Chancellor Gerhard Schröder when parliament approved the phaseout -- party boss Reinhard Bütikofer said he viewed the plan as an open provocation. "Each euro which is spent on dead-end nuclear technologies is an irresponsible waste of money," he said, arguing that research into renewable energies should be expanded instead.

With climate change a key worry in Germany, there is an open political debate over whether the country should postpone the closure of nuclear power plants or whether it should instead keep them open. Schavan's funding plan is controversial because of her adamant stance in support of reversing the closure of the plants.