Early on Thursday morning, it happened again. Three cars in the central Berlin district of Friedrichshain went up in flames, victims of night-time arson attacks. Both the fire department and the police were quick to respond, but the perpetrators -- many of whom are widely assumed to be from Berlin's not insignificant radical left-wing scene -- melted into the night. 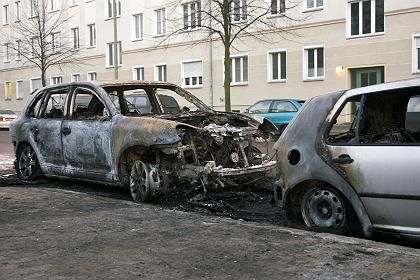 This car was set on fire in late January in central Berlin.

It is a story that has become all too common in Berlin. Twenty-four hours earlier, attackers transformed an Audi and a BMW into smoldering wrecks in the district of Mitte. Recent weeks have seen Porsches, Mercedes and VWs likewise torched. Indeed, arson attacks considered by the police to be "politically motivated" look to be dramatically higher this year than last. And so far, not a single arsonist has been convicted -- a situation that has some politicians in Berlin up in arms.

"We expect Berlin Interior Senator Ehrhart Körting and Police Chief Dieter Glietsch to remove the blinders from their left eye and take action against the militant left," Robbin Juhnke of the Berlin Christian Democrats, told the Berliner Morgenpost on Thursday.

Juhnke's inference is that the coalition which governs the city-state of Berlin, pairing Körting's center-left Social Democrats with the far-left Left Party, is soft on left-wing violence. And the numbers are indeed sobering. In 2009, there have already been 32 arson attacks on vehicles in Berlin in which 48 cars have been destroyed. In all of 2008, 68 such attacks took place.

What to do about it, though, remains a matter of some debate. Police have set up "traps" by observing expensive cars parked in at-risk neighborhoods -- but to no avail. The problem, they say, is that it takes only seconds to light a car on fire. By the time police respond, the perpetrators have disappeared into the night. In an unwitting admission of just how little progress has been made, a police spokesman told Berliner Morgenpost in January that "we suspect the perpetrators travel by foot, with the S-Bahn, the U-Bahn or by bicycle."

Adding to the difficulties, the left-wing scene, dominated as it is by self-proclaimed anarchists, is splintered, with a number of loosely-formed groups that don't necessarily work together. Plus, it isn't even clear that all of the arson attacks can be blamed on the far left. Berlin police suspect that there are a number of individual "copy-cat criminals" at work.

Still, there are a number of signs pointing to a political background for at least some of the attacks. In late January, for example, seven cars belonging to Deutsche Bahn went up in flames. The German rail operator has long been a target of the militant left wing due to the fact that it transports highly radioactive nuclear waste to a storage facility in Germany's Gorleben. The periodic transports -- known as Castor Transports -- are traditionally accompanied by at-times violent left wing protests.

Cars belonging to the express mail company DHL are likewise a favorite target due to the fact that the company provides logistics support for the German military in Afghanistan, another cause for disgruntlement in Germany's left. There have been a number of organized left-wing marches against both companies, the most recent in Berlin in mid March.

In a similar vein, the Berlin offices of the software giant SAP, located in the Mitte district, have become a favorite target of left-wing militants. The building's large picture windows ending up in shards on an almost monthly basis. The most recent attack occurred on Tuesday night, when a group of 100 black-clad anarchists suddenly appeared in central Berlin, vandalized cars and buildings, including the SAP offices, and then dispersed.

Such organized and vaguely political vandalism has been a feature of Berlin for years. But when it comes to the ongoing series of arson attacks against parked cars, the motives -- and potential political connection -- become more difficult to pinpoint.

In January of this year, a group calling itself the "Movement for Militant Resistance" -- which uses the acronym BMW based on its name in German -- claimed responsibility for the torching of eight vehicles in a letter published in the left-wing scene zine Interim. The group claimed it was fighting against gentrification in the Berlin districts of Neukölln, Kreuzberg and Mitte.

The claim seems plausible, says Klaus Farin, an expert on the extreme left with the Archive of Youth Cultures in Berlin. He says that many on the far left place great stock in living free of the consumerism and status symbols that characterize modern-day society.

"Most people have become good at simply ignoring the suffering and inequalities that surround us," Farin told SPIEGEL ONLINE. "The anarchist scene is full of people who can't ignore anything at all. They just see it in front of their eyes day in and day out." Many use that, he says, as an excuse for violence.

It could also explain why many of the cars burned in Berlin have been upmarket models -- Porsches, BMWs, Mercedes and luxury VWs. "They tend to find displays of wealth obscene," Farin says.

Still, Farin is also wary of characterizing the recent wave of arson attacks as political acts. Many of the cars burned, after all, have been inexpensive, privately-owned compacts. And some of the perpetrators, he says, could just as easily have been bored Berlin teenagers looking for an adrenalin rush -- a phenomenon on display every year during the German capital's traditional May Day riots.

Indeed, Farin says, it isn't even clear whether there has indeed been an increase in the number of cars burned in Berlin. "There have always been cars burning in Berlin. For decades," he said. "There were times in the past when the cops wouldn't even go in to certain streets in Kreuzberg."