Lukas wasn’t even a year old yet when his parents started thinking something might be wrong with him. "He just doesn’t seem normal – he’s different, even wilder than the wild ones,” says his father, a 47-year-old who does shift work as a machine operator.

The family lives in a rural village in the German state of Bavaria. His mother, 44, is an office worker. Lukas, who is now eight, is an only child and an outsider. "When Lukas wanted to play along and wasn’t allowed to or he was made fun of because his nasally voice,” his mother says, "he would just start hitting or biting.”

His classmates avoid Lukas, but his teacher accepts him as he is and has done a good job of including him. The teacher just puts her hand on Lukas’ hand, his parents say, signaling him to calm down.

But when the coronavirus pandemic broke out, in-school learning was cancelled for extended periods of time. The teacher is only able to spend an hour each morning teaching on Teams before putting the homework in the mail. "I had to sit down with Lukas and tell him what to do,” his mother recalls. "Of course he would then reproach me and tell me I'm not a teacher and say: I don't feel like it." She says she scolded him and shouted.

Lukas' parents then turned to a child psychiatrist in a nearby town. She diagnosed him with attention deficit hyperactivity disorder (ADHD) and gave him a prescription for methylphenidate, which is known under the brand names Ritalin, Concerta, Equasym and Medikinet.

"I was against it at first,” his mother says, "because people always say that methylphenidate changes children’s personalities.” In the end, though, she and her husband agreed. Lukas is given a purple pill each morning.

When daycare centers, schools and sports clubs closed during the first wave of the coronavirus, and when the environment and its familiar structures changed, many restless or unfocused children were diagnosed with ADHD. Their behavior, which had previously been considered normal, shifted into the realm of a mental disturbance, and they are now being treated with medication. Chinese researchers have seen a similar shift in school children with pre-existing ADHD conditions. During the COVID-19 outbreak, the boys’ and girls’ symptoms became much more severe.

Globally, 90 percent of children didn’t have continuous, regular education in 2020. It’s likely that almost all students suffered as a result, but some were affected particularly acutely.

"We are seeing more children with psychological stress and children with newly emerging or increased behavioral problems,” pediatricians in the German city of Hamburg said after the first lockdown. ADHD, they noted, is increasing both "empirically and in severity.”

Child and adolescent psychotherapist Thomas Meinhart says he is seeing a trend. His practice is located on the first floor of a farmhouse in rural Bavaria. He says he treats around 30 boys each quarter who are restless and erratic, including Lukas.

"The suffering of families has increased during the pandemic, with members turning on each other in some cases,” Meinhart says. "In such instances, the indication that drugs should be prescribed is more apparent."

Caroline Maxton, a doctor at a practice for child neurology in Hamburg, says she has seen a trend toward prescribing more drugs. Before the pandemic, she says, some families blamed teachers for their children’s problems at school. "But when classes were cancelled during the first lockdown, many parents noticed at home just how difficult it was for their child to concentrate and complete schoolwork,” she says. "The result was that more children have been medicated.”

In addition to the cancellation of in-person classes, parent training sessions and courses on social skills were also halted. In addition, sporting groups couldn’t meet and there were even significant restrictions on daily exercise. This was disastrous for children with ADHD tendencies, says Maxton, because physical activity is part of the treatment for the condition.

Around 750 to 900 children with ADHD traits are treated each quarter at the practice she runs together with colleagues. Most do without medication. Maxton evaluated the number of prescriptions given before and during the pandemic for DER SPIEGEL. "We had almost 30 percent more children who were newly medicated in our practice from March 15, 2020, to Feb. 19, 2021, than from March 15, 2019, to Feb. 19, 2020," she says.

This increase shows once again how strongly the environment influences whether a child becomes fidgety to the point of needing treatment. Another factor is date of birth. Children who happened to be born just before the deadline for school enrollment, making them the youngest entering first grade, have a significantly increased likelihood of being diagnosed with ADHD. Doctors often interpret the age-related immaturity as a mental disorder, which is in fact a misdiagnosis.

Manufacturers of ADHD medications, on the other hand, portray the condition as a congenital disorder of brain metabolism, thus exonerating families. "It is important for parents of children with ADHD to know that ADHD is not caused by parenting mistakes. Rather, it is assumed that the disorder develops essentially due to a hereditary predisposition," states an ADHD portal operated by Medice Arzneimittel Pütter, a German pharmaceuticals company. The company sells pills that contain methylphenidate, which helps ADHD children to calm down and be more attentive.

In addition to informing the public about ADHD, Medice also recruits doctors from universities and research institutions willing to work for the company – in exchange for compensation, of course. Such "key opinion leaders” have long been part of marketing pharmaceuticals. Doctors who are critical of the practice accuse colleagues who are taking the money of being corporate shills.

Members of the European ADHD Guidelines Group have issued an appeal calling for children with attention deficit disorder to be given medication even in cases when coronavirus containment measures have prevented them from undergoing the normal medical examinations. Of the 25 people named in the appeal, eight have a financial affiliation with Medice.

Thirty years ago, methylphenidate was only very rarely prescribed in Germany. Between 1993 and 2013, consumption increased 50-fold and has since stagnated at a high level. Exact numbers are rarely collected, but a study by public health insurer Barmer GEK found that 6.5 percent of boys aged nine to 11 and 2 percent of girls received an ADHD medication in 2011.

The medication is often given because a child appears to be too unfocused in class. That was the case with an 11-year-old boy who came to Meinhart’s practice on a recent Thursday. The family asked that the name of the boy not be included in the article. His mother says she and her husband would have been fine with their child not going to a college-prep school, but their son had insisted on it.

The boy was prescribed methylphenidate at the end of 2019, before the pandemic struck. He improved his grades in the middle of the lockdown and managed to get them up to the level he needed to get into a college-prep school. But neither his classmates nor teacher know that he continues to take medication. "We don’t tell people about it,” his mother says. "I don’t want to have to justify myself.”

For Lukas, the pandemic was the decisive factor. Psychotherapist Meinhart also treated him each week during the first wave of the pandemic as he sought to make sense of the child’s worries and boost his self-confidence. But Lukas’ suffering worsened from the tense situation at home and Meinhart suggested to the parents that they allow him to receive a prescription.

"What’s taking place here is actually a labeling process: We determine a deviation from the norm, we determine the behavior and we pathologize that,” Meinhart says. "And then, of course, you respond to it pharmacologically if there are no other options.”

Lukas started on 10 milligrams of methylphenidate a day. "You could really tell when I gave it to him in the morning,” his mother says. "Maybe a quarter of an hour later, Lukas would get really calm. Then the homework worked out well – he was able to concentrate on it, too, working through it quickly, with neat penmanship.”

His father recalls how Lukas could suddenly spend hours playing with Lego or Playmobil in his room. "After the first week, we started wondering: Is this normal? It was scary for us.”

Things grew even scarier a few months later, when Lukas started getting funny twitches. "He started having these weird facial tics, so I panicked a bit.”

Tic disturbances are known side effects of the drug. It can increase such tics that are already present or trigger them in the first place. The drug can also be an appetite suppressant, and an overly high dosage of the medication can make children seem sedated. It’s also not clear yet whether long-term use can permanently alter brain plasticity. That’s why child psychiatrists suspend use from time to time.

"After the first week, we started wondering: Is this normal? It was scary for us.”

Lukas stopped taking it a short time later, switching instead to another drug (a selective norepinephrine reuptake inhibitor), but it doesn’t seem to be doing much. He has resumed flipping out like he used to and sometimes even hits himself.

Psychotherapist Meinhart has told his mother to stop doing his schoolwork together with Lukas. "It’s not worth it. It could just ruin her relationship with her son,” he says.

Now, they’re all relieved that Lukas can go back to school normally, with COVID-19 restrictions being loosened in Germany. They're also hopeful he will have fewer problems.

One of the things we have learned from the pandemic is that cancelled classes or chaotic classroom situations can trigger mental disorders. Conversely, those children who were quiet yet had trouble focusing blossomed during the pandemic because they no longer had to be in an overcrowded classroom and were able to work at home in peace.

"The relatively high rate of methylphenidate prescriptions in Germany is also a product of problems with systems in society – in school or in the professional life of parents – that are somehow supposed to be solved by families," says Meinhart. Many are good at finding ways to solve them, but others are less so. As such, politics and society should do more to strengthen schools. "If we were to have two teachers per class and more school psychologists, we would need less medication.”

Hamburg-based doctor Maxton draws a similar conclusion. "Classes need to get smaller,” she says. "A class size of 10 to 15 students is optimal for learning – and it is much needed for children with ADHD.” 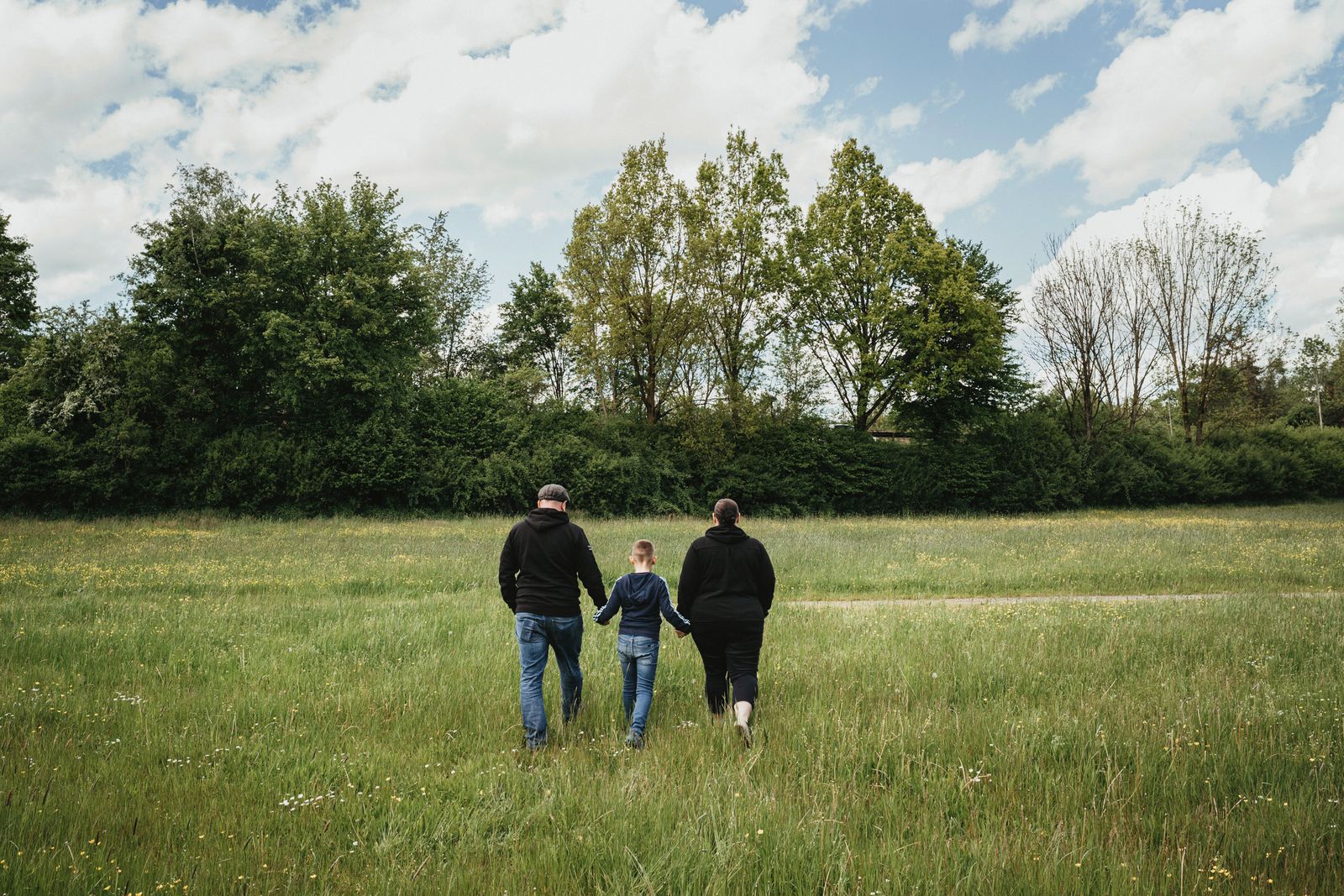 Student Lukas with his mother and father: "You're not a teacher." 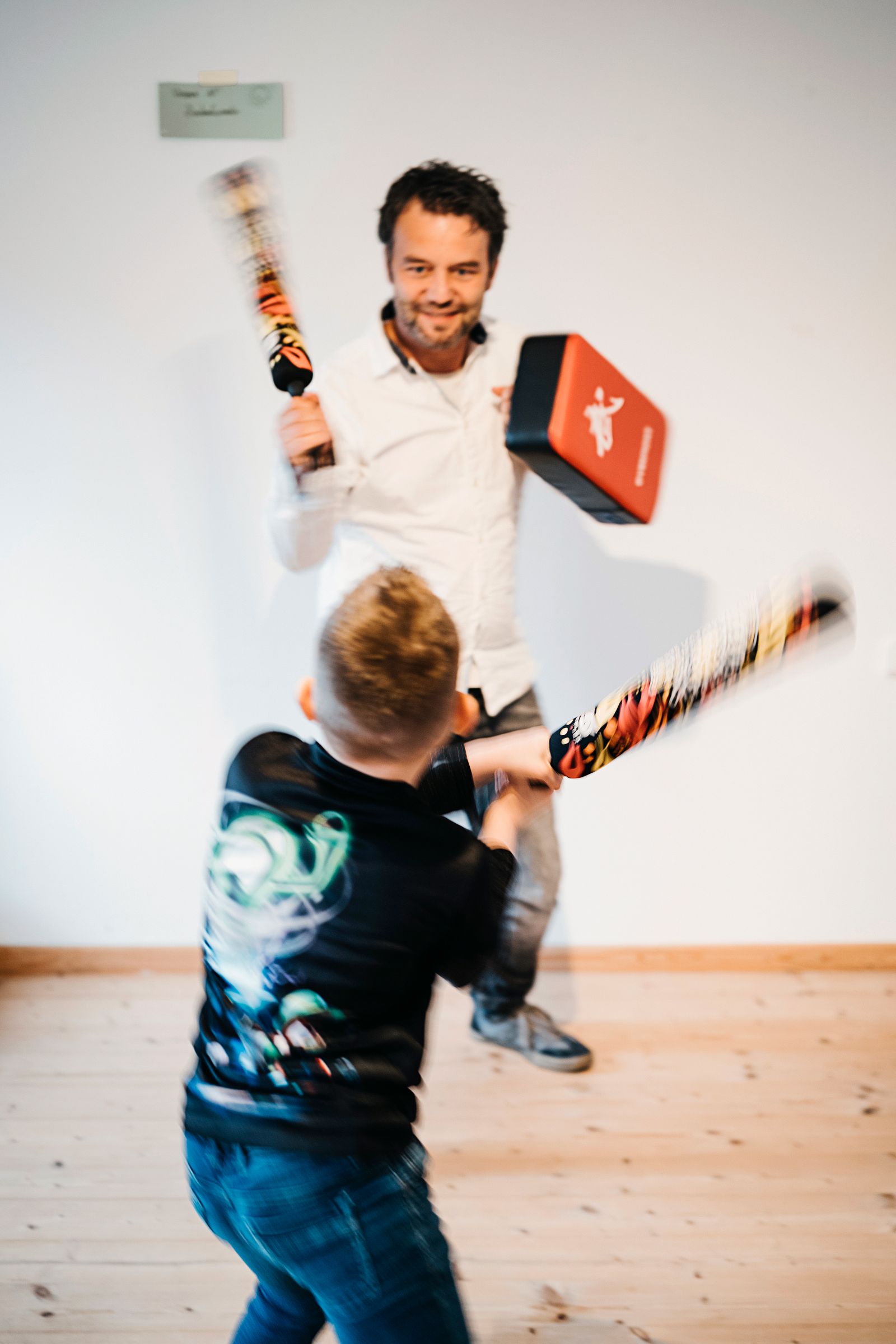 Psychotherapist Thomas Meinhart, patient Lukas: "We determine the behavior and we pathologize that."