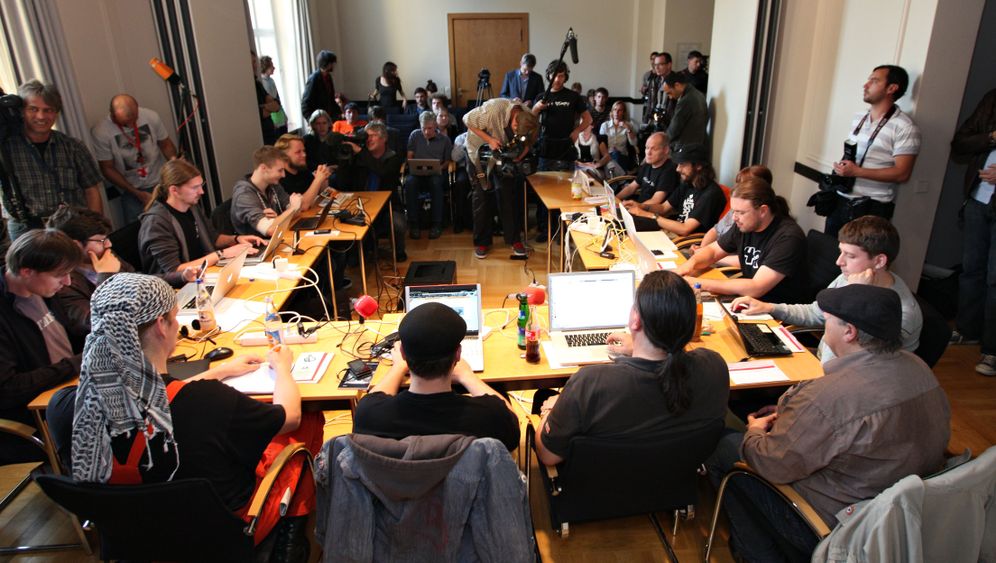 Hans Magnus Enzensberger, 82, is an ideal source of information when it comes to revolutionary movements. An essayist, poet and author, Enzensberger has been first a participant, then an onlooker and chronicler for every political upheaval and movement meant to lead the way into the future for the last five decades.

Enzensberger, then a Marxist, was present for the birth of the "68ers," what the Germans call the participants of the political movements and student protests of the 1960s. He shared the fervor of Germany's center-left Social Democratic Party (SPD) in their fight against conservative politicians Franz Josef Strauss and later Helmut Kohl, and of course he rooted for the country's Green Party as it grew to become an established parliamentary party.

Last Thursday, Enzensberger was packing his bags in his Munich apartment, as he was headed to Belfast for a reading of his epic poem "The Sinking of the Titanic" the next day. But before he left, the poet wanted to say a few words about the Pirate Party, the new force that has become the great hope in Germany's constellation of political parties.

"Political? No, politically there's nothing there," Enzensberger growled over the telephone. "And certainly nothing revolutionary. It's actually surprisingly bourgeois. Like our grandparents, who were happy when they could get something for free."

There's a pause, a bit of grumbling, then two more sentences before he returns to his packing. "I wonder why they don't go the bakery and say that they'd rather not pay. Why does it have to be against us, the authors?"

The Pirate Party, founded on Internet freedom advocacy, has set some notable records in its short career, and no other party has achieved such heights in such a short period of time. Since its first electoral victory in Berlin state elections last September, the party has continued a steady upward march in the polls, recently reaching 13 percent in national support. And no other party is gaining membership so fast. Party leadership announced last week that the Pirates had reached 25,000 members, making the young party already nearly half the size of the 32-year-old environmentalist Greens.

But now the Pirate Party has laid claim to another first: It's the first left-wing party to have a considerable number of intellectuals not for, but against it.

Artists can always be counted on when it comes to standing up for democracy and justice. Ever since Günter Grass drummed up support for Willy Brandt and the SPD 40 years ago, Germany's intellectuals have congregated on the progressive side. When in doubt, they lean to the left, and participating in the cutting edge is considered a central duty.

But their love affair with the Pirate Party is cooling off before it even had much of a chance to begin. In recent days, artists have spoken up one after another, expressing their unease at the movement's calls to deregulate all digital content. Starting with musician and author Sven Regener, who freely expressed his frustration nearly four weeks ago on public broadcaster Bayerischer Rundfunk, the protest shows no sign of abating.

This is a broad alliance, formed across many types of media and gathering famous names such as film director Doris Dörrie, publisher Carl Hanser Verlag's literary director and author Michael Krüger and author Julia Franck. "I think it's high time I explained a couple of things to you Pirates. Much of what you say is based on dangerous half-truths," musician Jan Delay said in a SPIEGEL debate with Christopher Lauer, a member of Berlin's state parliament for the Pirate Party.

It took some time for this resistance to form, since promises of more democracy are generally welcomed by intellectuals. But the closer these authors and artists look, the less they like what they find.

The rise of the Pirate Party has kicked off a debate over the party's central demand, a reform of copyright law. The ideas the party formulates affect the livelihood of many artists. The Pirate Party wants to establish a right to "noncommercial duplication." This would forbid only ventures that do business in illegally making music, books or films available online. Copying and downloading copyrighted content, on the other hand, would be allowed.

Many creative professionals who consider themselves part of the political left have also noticed on second glance that the Pirates' success has been to the detriment of the Green Party and the SPD. In the federal state of North Rhine-Westphalia, for example, Governor Hannelore Kraft of the SPD can no longer be certain of her party's victory in the next election. That the SPD will emerge with the highest number of votes still seems to be a given, but whether those votes will be enough to form a coalition between the SPD and Green Party is in question.

This could change the balance of power at the federal level as well. If the Pirate Party overcomes the 5 percent vote hurdle necessary to gain seats in Germany's parliament, the Bundestag, it will be difficult for the SPD to form a majority coalition opposing German Chancellor Angela Merkel's conservative Christian Democratic Union (CDU). "Of course we're pleased with the Pirate Party's success. We just can't say that too loudly," says a close follower of the Chancellor.

The writers' rebellion has put the Pirate Party in a difficult situation, though. Musicians and writers are influential, and those who have these eloquent intellectuals on their side have an advantage when it comes to the battle for public political opinion. Now the Pirates have to contend with accusations that they are taking an axe to German culture.

For the first time, the party faces a tough opponent that can't be accused of engaging in party politics. Artists are calling on the Pirates to offer a solution that would allow people in creative professions to earn their living if others offer their work for free online.

But the Pirate Party isn't capable of presenting such a solution, and not just because of its patchy political platform. The party's principle of radical grassroots democracy also renders it unprepared to make public statements in a crisis. Any statement by one of the party's leaders must first be discussed with the party's membership, which slows reaction time. The greatest burden, however, is the new movement's desire to be egalitarian. Because the Pirates distrust any form of authority, anyone who tries to be the party's face and voice to the outside world falls under suspicion. Those looking to climb within the party despite this axiom of equality do well to put themselves forward as modest servants of the party. Berlin state parliamentarian Lauer's attempts to rise within the Pirate Party's ranks have failed partly because many members resented him for his media presence.

At the moment, not even the party's leadership has authorization to represent the Pirates publicly. When party chair Sebastian Nerz and his deputy Bernd Schlömer reflected publicly last week that it might make sense to establish "regular contact people" for certain topics such as copyright law, it immediately triggered one of the party's dreaded "shit storms."Calls to relieve the two politicians of their offices at an upcoming party convention in late April came raining in via Twitter. Oliver Höfinghoff, another member of Berlin's state parliament for the Pirate Party, posted that his "dear Pirates" ought to remain true to the party's principles and "get rid of these overhyped candidates."

Nerz is a man with a hearty constitution, one reason he's often compared within the party with former German Chancellor Helmut Kohl. But even he is being worn down by the constant attacks. Other Twitter users have made a joke out of presenting themselves as Sebastian Nerz and leaving sarcastic comments in his name.

"My nerves have certainly worn thin," Nerz admits. Earlier this year, he considered throwing in the towel entirely, he said. Although he eventually decided otherwise, he's been left with "a certain base level of irritation."

Because of this fear of attacks from within their own ranks, many Pirates no longer dare to appear on television. Berlin Pirate Party member Julia Schramm will be running for party chair at the upcoming federal convention. Under other circumstances, such a candidate would make her presence known in the media, but Schramm has recently been refusing all public appearances. It didn't require much deliberation, either, before she turned down an invitation to appear on a prominent political talk show hosted by Maybrit Illner, to keep from jeopardizing her chances in the election.

Any party member who does dare give an interview must take care not to stray too far from the party line. "If you don't mess up, then in the best scenario, things will stay calm," Schramm says. "If you do screw up, all hell will break loose."

The harsh tone used on the Internet is also scaring away many people, especially artists. Like any new left-wing force, the Pirates were initially welcomed with open arms by the country's intellectuals, who valued their unconventional and cheeky approach. As with the Green Party before them, the Pirates seemed to offer a promise of breaking down the calcified rituals of politics.

Buy it's now becoming clear that the world of artists and the world of nerds don't have much in common. Who among intellectuals, for example, can take seriously people who spend their time on role-playing games and consider J. R. R. Tolkien's "The Lord of the Rings" the crowning glory of literature? A bit belatedly, many have come to recognize that the Pirates are a new type of politician. The Green Party recruited its ranks from humanities and social science departments across the country, and a typical member qualification was an unfinished degree in sociology. The party drew people who believed in the power of ideas and made no secret of their disdain for technology.

The Pirate Party is exactly the opposite, driven not by a particular idea, but by a belief in the power of technology. Its members grew up with the Internet, and now want to transfer its rules from the digital to the real world. The party's founding myth is not the fear of nuclear annihilation, but more a desire to be allowed to keep playing Counter-Strike unimpeded. The party's first election campaigns in Germany focused not on protesting against war and social injustice but, rather, on resisting the ban on such first-person shooter video games.

The long-established forces in the left-wing camp have so far observed the new competition with a mixture of fear and awe. Green Party leadership, as represented by party chair Renate Künast, was quick to declare that the Greens also consider copyright law in urgent need of reform. The idea of a "cultural flat-rate" has been circulating, though no one has really been able to explain how it would work.

With the initial shock behind them, some are starting to ask themselves if it really makes sense to adapt their own platforms to Pirate Party positions. "We can't simply squander intellectual property," says Agnes Krumwiede, a Green Party parliamentarian and the party's spokesperson on the arts.

Krumwiede studied piano and is familiar with the dire financial straits many artists experience, as well as their fear of the Internet. "I consider it an untenable situation when musicians no longer dare to advocate publicly for their interests, simply because some people have gotten used to downloading everything for free from the Internet," she says.