Executives from troubled automaker Opel are attending emergency meetings with German Chancellor Angela Merkel on Monday in a bid to negotiate €2 billion in government loan guarantees. Opel, which since 1929 has operated as a subsidiary of Detroit-based General Motors (GM), is trying to take steps to protect itself from disaster should its American parent company be forced to declare bankruptcy. 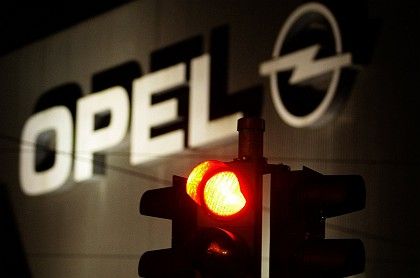 Opel wants the German government to help insulate it from the potential collapse of its parent company, General Motors.

As GM teeters on the edge of financial oblivion, many in Germany are worried it might take Opel down with it. Back in April, before the world sunk into what many consider the biggest financial crisis since the Great Depression, GM pledged to invest €9 billion euros in Opel through 2012 with the goal of developing 20 new car models. But now, as GM tries to negotiate its own emergency bailout from the US government, that pledge is looking increasingly shaky.

If GM were to file for chapter 11 bankruptcy, it would free itself from a range of debt obligations. It could further result in the transfer of a number of contracts from Opel's development center in Rüsselheim to centers in Michigan, where GM is based. According to Deutsche Bank analyst Rod Lache, as things now stand GM can only continue to finance itself through December.

Opel, which targets low-income buyers, has been especially hard hit by a drop-off in consumer demand. Its sales have dropped 12 percent this year -- twice the industry average -- and it has been forced to temporarily halt production at several plants. Still, the unit is in considerably better shape than its American parent. Opel's General Works Council Chairman Klaus Franz insisted on a German news show on Sunday: "Opel is doing well, Opel is liquid, period!" The automaker directly employs over 25,000 people in Germany and is indirectly responsible for an additional 50,000 jobs.

Opel is seeking €1 billion in loan guarantees from Germany's federal government and an additional €1 billion from four German states to ensure that its ambitious development plans go forward. At issue, however, is whether Opel can guarantee that funding made available by the German government would stay in Germany and not be sucked back into the wider financial black hole of General Motors.

Although Opel insisted last Friday that state aid would "under no circumstances" be used outside of Europe, their request for assistance raises special concerns about how and whether a national government should bailout a subsidiary owned by a foreign multinational. German Economy Minister Michael Glos emphasized on a Sunday news show that the government "needs to know whether the money will stay in Germany." He is far from alone with his concerns. Armin Schild, a union leader with IG Metall, told the Berliner Zeitung on Monday that any assistance for Opel should be contingent on the funding be used to keep plants open in Germany and thereby guarantee the jobs of German workers.

Managers at Opel would ideally like to see the unit spun-off from GM, a move which would decisively disentangle the company from the financial and political dramas unfolding in Detroit. German politicians and union leaders like Armin Schild also support the idea. Schild declared on Monday that GM must "let Opel go free."

That, though, would be difficult. When GM took over Opel in 1929, the German carmaker was itself on the brink of bankruptcy. In the decades since being saved by GM, the two companies have become intimately intertwined. Opel develops cars for all parts of the GM empire, contributing technical know-how not only to the production of vehicles in the American and European markets but also, for instance, for the South Korean subsidiary Daewoo. Further complicating a separation is the fact that prevailing market conditions would make it difficult to find a buyer.

Opel's efforts to secure government assistance have triggered controversy in Germany, sparking fears among economic liberals that helping one company could force the government to undertake a general bailout of the German auto industry. Indeed, Roland Koch, governor of the German state of Hesse where Opel is based, has called for a "protective shield" for the entire auto sector.

Finance Minister Peer Steinbrück announced his opposition to a general bailout on Monday, telling Bild newspaper on Monday that a such a plan "doesn't make any sense." Steinbrück argued that the government couldn't do anything about the decline in consumer purchasing power, which lies at the heart of the auto industry's woes, and that it shouldn't make itself responsible for the "errors" committed by the auto companies.

Klaus Zimmerman, a well-known neoliberal analyst with the German Insitute for Economic Research told the Berliner Zeitung that devoting tax-payer funds to an industry-wide bailout would be like throwing money into a "bottomless pit," adding that directing money at Opel would only make sense in the event of an actual GM bankruptcy.

Still, the government could decide to help Opel while refraining from taking any industry-wide steps. Economy Minister Michael Glos, appearing on a Sunday news show, evinced considerable sympathy for Opel even while sounding skeptical about a more general bailout. Glos nostalgically recalled that his own first car was an Opel and that his grandfather had driven one before World War II. Glos acknowledged that the global auto industry finds itself in serious trouble due to a fall-off in global demand, but said it "wasn't clear" why "Opel, of all companies, ought to pay the price."

Opel's misfortunes, along with the wider crisis engulfing the German auto industry, are sure to become campaign issues as Germany's political class gears up for the 2009 parliamentary elections.

While Angela Merkel meets with Opel executives Monday afternoon, German Foreign Minister Walter Steinmeier, a Social Democrat and the party's candidate for Chancellor, will be holding his own meetings with union leaders representing Opel workers. Steinmeier has declared that workers in the German auto industry will "not be left on their own," and seems to favor a more interventionist approach.

Steinmeier's meeting has raised a few eyebrows. Ronald Pofalla, general secretary for Chancellor Merkel's center-right Christian Democratic Party, told the German press agency DPA that Steinmeier's portfolio does not include economic policy and that he had no business conducting such a meeting in the foreign ministry. The ministry countered that no branch of the economy is as internationally embedded as the auto industry. Whether GM's meltdown becomes a crisis large enough to actually warrant diplomatic intervention remains to be seen in the weeks ahead.