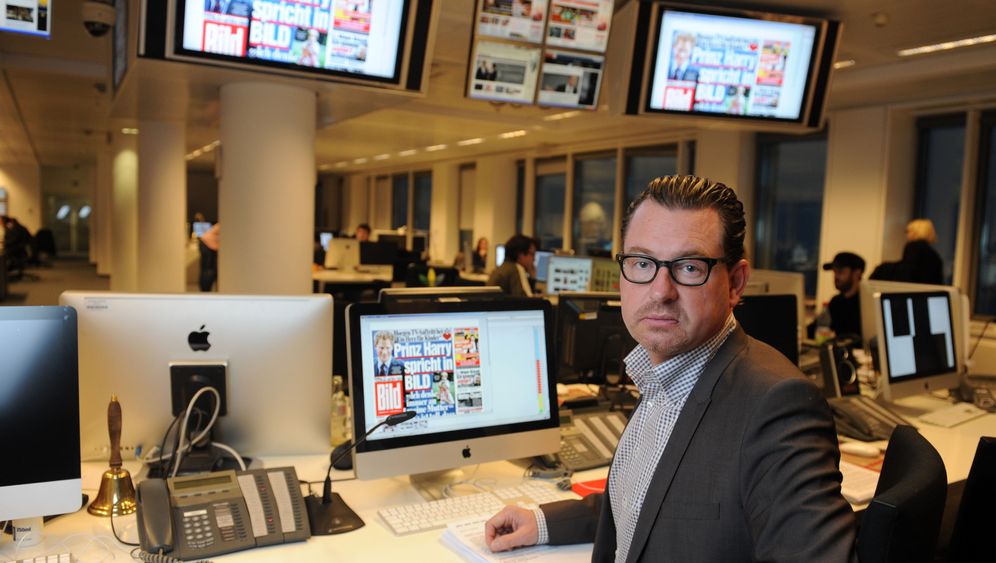 Photo Gallery: Is Axel Springer Turning Away from Newspapers?

In the past, when an excavator pulled up at Axel Springer, Europe's largest newspaper publisher, it could have more than one meaning. Take, for example, when the foundations for its 19-story headquarters building in Berlin were laid in 1959. They were set right up against the Berlin Wall -- a message that served not only to provoke the East German regime, but also as an enduring symbol of that the legendary newspaper publisher firmly believed that Germany would one day reunify.

Axel Springer himself died in 1985 at the age of 73, four years shy of the fall of the wall, but foundations continue to be built at the company. Even today, they can have more than one meaning. At Springer's most recent company meeting, CEO Mathias Döpfner announced a new construction site, almost as an aside.

Döpfner spoke only briefly, but his words sounded noticeably euphoric. He said Springer's New Media Center, being built on an adjacent property, would become an "appealing home." The new building will be ready for occupancy in a few years, and it too could become a symbol: one of a corporate restructuring without equal. The company will not only be printing its publications in the new building -- it will also be crushing any remaining dreams from the old era of print.

To speed up the process of change the digital group has embarked on, the executive board, led by Döpfner, believes a deep-seated transformation is needed in its classic print business. This transformation is far more extensive than anything in the past, and it will go further than many people, including those within the company, would have imagined coming from Döpfner. After all, this is a veteran newspaper man whom the prestigious Frankfurter Allgemeine Zeitung newspaper once implied was something of a journalistic lightweight, suggesting he was perhaps best suited for a music section.

In addition, the planned cuts aren't mainly aimed at the company's financial problem children, like the broadsheet Die Welt or the Berliner Morgenpost, as one might expect. Instead, they target the journalistic heart of the tabloids Bild, Bild am Sonntag and B.Z., known internally as the "red group."

As several Springer officials entrusted with the negotiations confirm, the scenarios currently being discussed involve savings of up to €20 million ($26 million). The sources, preferring to remain anonymous, agreed that the company envisions slashing between 170 and 200 jobs in the "red group" as part of the cost-cutting plan.

This would mean that the advertising stickers attached to the guarded revolving doors in the lobby of Springer headquarters could soon require correction. One sticker reads: "We have 500 reporters and one promise: We dig up everything for you." But now that slogan could just as well read: We're digging up everything -- for our shareholders.

At first glance, Axel Springer, with the drastic cost-cutting plans it envisions, is merely confirming an international trend that has been underway for years. Structural change in the media industry is claiming new victims almost monthly. Shrinking circulation figures and advertising revenues have also led to job cuts elsewhere, as well as the sale or even shutdown of entire newspapers.

The most recent casualty was Financial Times Deutschland, published by Springer competitor Gruner + Jahr (which also holds a stake in SPIEGEL). The salmon-colored business paper had never managed to turn a profit in its 12-year history.

Bild, which has the highest circulation of any newspaper in Germany, and its sister publications have also felt the effects of the decline of print journalism. In early 2001, the Berlin company's tabloid flagship was still selling 4.3 million copies a day. Today, 12 years later, Bild's circulation has dropped by just under a half.

When it announced its quarterly results last Tuesday, the company had, once again, no good news from its newspaper business to report to investors. According to Springer's figures, newspaper sales declined by about 10 percent over the same quarter last year, while pretax profits were down by about 24 percent.

But Bild differs from its ailing siblings in the newspaper field in one respect: It is still making a lot of money.

The paper most recently had a return on sales of more than 30 percent, according to information obtained by SPIEGEL, a number that very few legal businesses can hope to attain. Last year, the newspaper contributed about €300 million to the media group's overall profit, while the newspaper division as a whole still managed to generate a respectable return of about 20 percent in the first quarter.

In light of these figures, Döpfner's new cost-cutting ideas may seem surprising at first glance. But upon closer inspection, a strategy emerges: Springer, once primarily a newspaper publisher, wants to gradually distance itself from its relatively costly classic journalistic products, which are difficult to market, in favor of other digital business models.

This list also shows where Döpfner is trying to take the company, because Springer, like other media companies (such as the Burda publishing house), doesn't earn money in its digital businesses with journalistic content. Instead, growth in the digital segment comes primarily from the online job site StepStone, real estate sites like Immonet and Seloger, and the price comparison website Idealo.

These are also the benchmarks Döpfner is using. When it comes to development of its digital business, Springer can hold its own among German media companies, Döpfner said. But unlike pure Internet companies, he added, Springer is "not fast enough or innovative enough."

When SPIEGEL contacted the company last week to inquire about the planned cuts at Bild, it triggered a frenzy of activity. Döpfner was unwilling to provide any information about his current restructuring plans. The CEO also disappeared with unusual rapidity from the presentation of Springer's award for up-and-coming journalists at the Berlin headquarters last Wednesday.

Last Friday, his spokeswoman Edda Fels tersely announced that the company was currently examining "a wide variety of restructuring scenarios." Nothing was denied, and Fels added: "We now intend to lay the groundwork for economically successful multimedia journalism."

So far, Fels said, the plans consist of nothing but "tentative war games, but no favored models or decisions," adding: "The management board has not addressed the issue yet."

This may be true of the full board, but three members reportedly attended board meetings to discuss how the company could reach its cost-cutting goals. One of the scenarios discussed, for example, involves merging B.Z., Berlin's largest newspaper, with the local edition of Bild published for the city of Berlin and the neighboring state of Brandenburg. The local section of Bild in Berlin would then be published in conjunction with B.Z.

Springer's top executives believe that this would enable the company to cut costs at the Berlin issue of Bild, which is relatively well-positioned in terms of personnel. About 60 journalists currently produce the local edition in the German capital -- at a circulation of less than 90,000, two-thirds of which is not even sold in Berlin, but in the surrounding areas of the state of Brandenburg.

The company, including senior executives, has already examined various approaches to cutting jobs. One option that was discussed apparently envisioned bringing together editors working for Bild, Bild.de and B.Z. into a single company, such as Bild Digital GmbH.

Employees at Bild Digital work without collective bargaining agreements and under otherwise inferior conditions than their traditional print counterparts. The company is also likely to terminate a number of employee contracts, a move for which it has already made financial preparations. Springer created a €50 million reserve this year for structural adjustments, with part of the money earmarked for severance programs.

Official Plans To Be Unveiled Soon

The question is, how does the man who has run Bild for the last 12 years, Kai Diekmann, feel about the planned radical reorganization? The newspaper's editor-in-chief has been in California since last June to study the digital media revolution in the Silicon Valley, the place where it is most prolific.

Diekmann has conformed to his new nerd environment in almost chameleon-like fashion. The former tabloid manager, with his gelled hair, has transformed himself into an unshaven hobbit in a hoodie, tweeting ecstatically over the prospect of being one of the first to test Google Glass.

Diekmann has stayed in California longer than originally planned, but now he is about to return home. He attended his first goodbye party in the Valley last week, and by early June he is expected to be sitting at the tabloid's notorious news desk once again.

Did Diekmann arrive at the conclusion in California that journalism that depends on large contingents of personnel no longer has a future? Has he rubber-stamped the cost-cutting plans? Could they even be based on his conclusions?

Apparently this is not the case. Earlier this year, Springer executive board member Andreas Wiele and Bild Managing Director Ralf Hermanns flew to Silicon Valley to bring the 48-year-old Bild editor into the loop about Springer's plans to cut costs. Diekmann was reportedly skeptical about the endeavor. But by the end of last week, he was just as unwilling to discuss the issue with SPIEGEL as Springer's CEO.

His reticence was understandable. Even today, many Springer employees don't feel like they are working in a company that performs substantially better, in terms of return on sales, than heavyweights like BMW, Deutsche Telekom and Lufthansa, and does so with supposedly "unsexy" print products.

Newcomers in Springer's editorial offices are strung along from one contract to the next, often with very short terms. All fixed-term contracts are reportedly "under review," and many of the employees involved will not see their contracts renewed. Visitors to the editorial offices of Die Welt are surprised to see run-down furniture that even student dorm residents would likely eschew. The newspaper is already carefully scrutinizing its costs, which sometimes results in bizarre directions.

For instance, a senior editor at Die Welt wrote an email to the editorial staff to make them aware of the costs of conducting a search in the paper's internal archive database. "Each time someone presses the 'Search' button in the intranet, it costs €1.60," the email reads. "And the more often searches are conducted, the more costs are incurred in the following year." He offers the following advice to his colleagues: "In many cases, alternatives that cost nothing can be used for searches." Specifically, he recommends using Google instead of the internal archive to search for articles in company publications.

The strategists have also made several cuts within the publishing house's targeted "red group," while simultaneously raising prices. In Munich, for example, Springer has been printing a version of Bild in a smaller format, partly to save paper costs.

And then there is the master plan, the details of which the company intends to officially unveil in two weeks: the intention, long in the making, to set up a paywall on the bild.de website.

The new, pay-for-use area on the website will be called BILDplus and will also include content from the newspaper edition. In addition, Springer will soon begin broadcasting German Bundesliga football matches, after having acquired the broadcast rights last year. The acquisition allows Bild to show up to six minutes of video per match on its website on each match day.

The rules are strict. The videos cannot be placed online until at least one hour after the end of a match, and viewers wanting to watch the videos will have to pay for the privilege until midnight.

Ironically, the broadcast rights cost almost as much as the flagship paper Bild now aims to save: €20 million.

7 Bilder Photo Gallery: Is Axel Springer Turning Away from Newspapers? 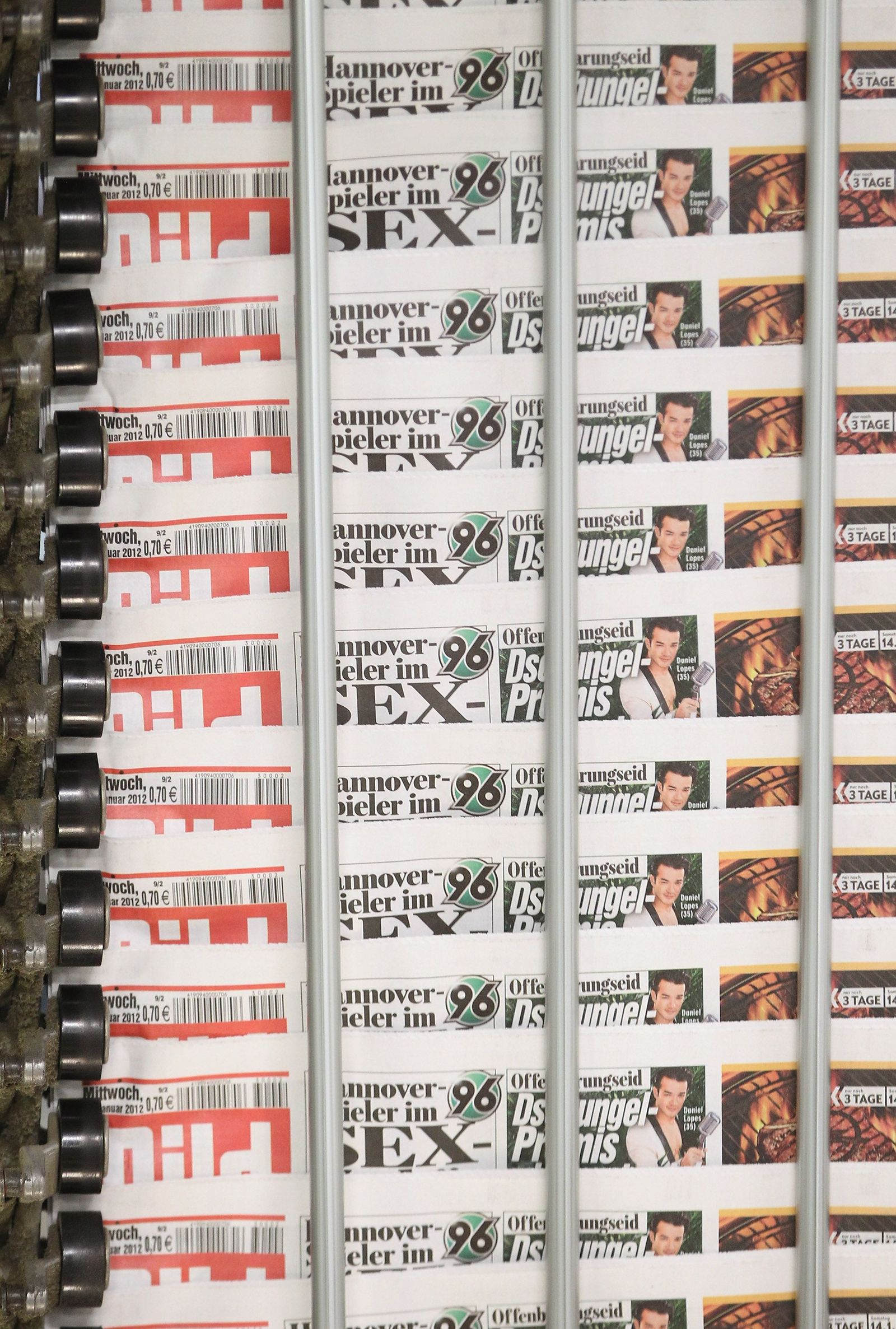 Bild, which has the highest circulation of any newspaper in Germany, and its sister papers have been feeling the effects of the decline in print journalism. In early 2001, the Berlin company's tabloid flagship was still selling 4.3 million copies a day. Today, 12 years later, Bild's circulation had dropped by just under half.