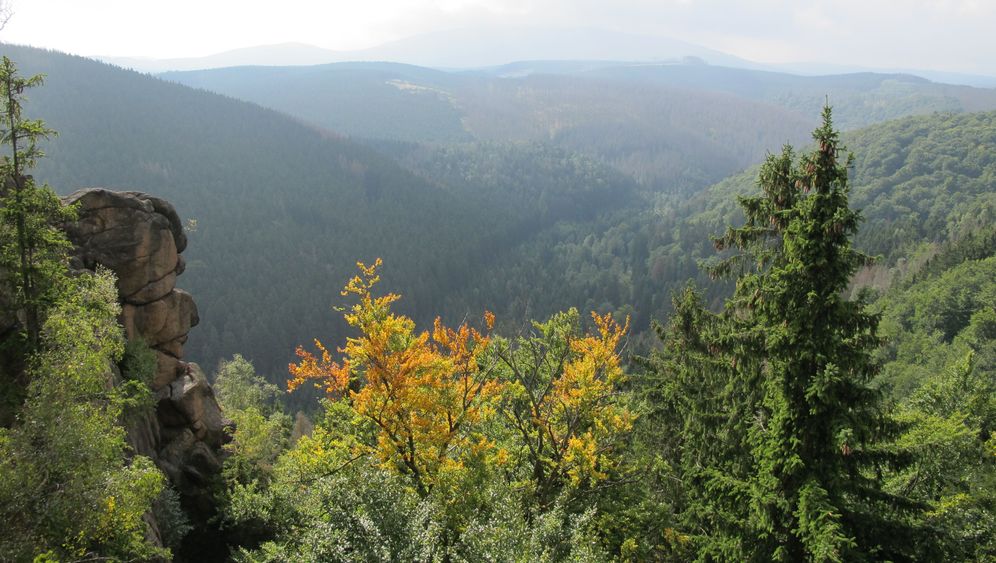 Photo Gallery: Where The Lynx Once Roamed

On Easter Sunday, 2009, officials at Germany's Harz National Park opened the gates to their wooded enclosure and let out two young lynx. The brother and sister, who had been found orphaned by the roadside a few months before, were once again on their own in the wild. And, witnesses said, they didn't look back.

After spending some time in the Harz, a low mountain range in northern Germany, the male, dubbed "M2," continued on the move. He traveled southwest some 110 kilometers (68 miles) to Kassel, tracked with a GPS collar, and covered wide swaths of land. He crossed the Werra River, and even made it over the autobahn, using one of a number of "green bridges" in Germany built exclusively for wildlife.

M2's journey was followed closely by conservationists with the Harz Lynx Project, a program that began reintroducing zoo-born lynx into the wild in this part of Germany in 2000. So far, they have released 24 lynx -- nine males and 15 females -- who came from zoos and wildlife preserves in Germany and Scandinavia. The program is sponsored by the Harz National Park, the states of Lower Saxony, Saxony Anhalt and Thuringia and other organizations.

The goal of the project is for cats like M2 to be able to reach other lynx populations in forests in Bavaria or the Czech Republic, and to reestablish a wild lynx population in the region.

"Another 100 kilometers, and he would have reached another population," Ole Anders, head of the Lynx Project, says. "I am quite optimistic."

Hunted to Near Extinction

The Eurasian lynx once freely roamed the forests of central Europe, but by 1900 they faced extinction after centuries of being targeted by hunters, who reviled them for killing their local game and livestock, and who prized their fur.

Their cousin, the smaller Iberian lynx, is the most endangered cat species in the world, and is the focus of conservation efforts in Spain. Most of the 7,000 to 8,000 Eurasian lynx now living in Europe are found in the Nordic countries, with scattered populations in western and central Europe.

Prior to the project's efforts, the last lynx living in the Harz forest was killed in 1818 by a group of 17 hunters. A monument was built on that spot near Lautenthal, commemorating the death of the predatory cat.

And while some attitudes have changed in the last 200 years, the plan to reintroduce the lynx was still met with initial resistance by some individual hunters who were afraid that they would kill the local roe deer population, and farmers who feared their livestock would become easy prey.

"Hunters are not, in general, positive towards the introduction of animals by man into an area, because normally that causes more problems than it solves," said Torsten Reinwald, of the German Hunting Federation.

But in the case of lynx, the hunters' associations made an exception, believing that there was adequate scientific evidence that the surroundings could support the lynx again.

"Most hunting associations -- over 90 percent -- are registered as environmental conservation organizations," Reinwald said. "This predator coming back into Germany, this is a really good thing for biological diversity."

The hunters' association in Lower Saxony, home to the Harz forest, supported the program from the outset. Florian Röfling, a spokesman for the group, said that they no longer worry that the roe deer population will decline.

Still, Reinwald said, some hunters believe that the roe deer behave differently and are harder to find when lynx populations are present.

Farmers can receive compensation from the federal government if they think one of their animals has been attacked by a lynx, but instances have been rare. For example, a €6,000 fund established in Bavaria in the late 1990s for such incidents hasn't been exhausted, Reinwald said.

The Lynx As A Tourist Attraction

Locals in the Harz forest are now celebrating the cats' return, and are cashing in on their appeal to tourists. Lynx likenesses peer out from storefronts and restaurant windows in Bad Harzburg, where three lynx, who are too tame to live in the wild, are housed in a public enclosure. More than 8,500 tourists came last year to view the public feedings of the animals.

Seeing a lynx in the wild is extremely difficult, although numerous sightings are reported within the Harz mountains each year, and can be tricky even at the wooded enclosure in the Harz.

But one of giant cats is not camera shy. Pamina, a hand-raised lynx who seeks out human companionship, is a local favorite. On one recent afternoon, she nuzzled against the leg of a caretaker. She stood as tall as the caretaker's hip, and had the mannerisms of a housecat. But those looks deceive -- Pamina also has the strength to attack a deer her size and pin it down until it dies.

With a beard of whiskers and the tufts of hair sprouting from her ears like paintbrushes, Pamina charmed the crowd as she sauntered around the enclosure.

Anders is hesitant to give estimates on the current population of the animals -- who are loners in the wild -- until more data can be collected. Andreas Kinser, a forestry expert with the German Wildlife Federation, said that the lynx population in the Harz mountains is likely between 50 to 60 animals. In Bavaria, the estimates run from 50 to 100, according to officials with the Bavarian National Park.

Risks Include Poachers And Highways

Some scientists have questioned whether or not reintroducing the lynx will be successful. The authors of a 2005 study published in the scientific journal Conservation Biology, argue that a population in the Harz Mountains would only be viable if mortality rates remain low. Modern highways and the threat of poachers make that all the more difficult. Even in protected areas in Poland poaching accounts for more than 70 percent of lynx deaths, the study stated.

Anders points out that the 2005 study was based on a model and not in lynx in the wild, and he thinks the actual situation is better than the model suggested. It is impossible to tell what the actual mortaility rate is since dead lynx are rarely found, he said.

If the lynx from the Harz can connect with other populations in the Bohemian and Bavarian forests scientists will worry less about inbreeding, which is now a concern. It will also prove that the Harz population is sufficiently established, since lynx have to spread out to find their own territory. M2's odyssey already provides a good example that this actually could happen.

"It is our challenge to do the best job we can, give the lynx a good start and find out if they are able to survive -- not in computer models but in the real world," Anders said. "If they make it, we will score a win for another big threatened mammal species. If not, we would have to face the fact that in Germany, the age of the lynx and its habitat is definitely over."