Every year around this time, German firefighters and emergency room doctors look to the New Year holiday with dread. In cities and towns all across Germany, New Year's Eve is an occasion for uncontrolled exuberance -- which often takes the form of uncontrolled fireworks displays launched from street corners and balconies all over the country.

It has become a New Year's ritual for German newspapers and authorities to issue dramatic warnings about "Polen Böller," or "Polish fireworks," German shorthand for fireworks illegally imported from eastern Europe. Foreign fireworks, the German press implies, are largely to blame for the thousands of injuries and fires set every New Year's Eve.

There's no doubt that bargain hunters often cross the border to buy discount firecrackers in Poland and the Czech Republic. In 2008, border police seized some 3,000 fireworks on the Polish border with the German state of Brandenburg. This year, the story is the same: On Sunday, German police caught four teenage boys on a train from Poland with 441 fireworks. And on Monday, Bavarian border police announced that they found nearly two and a half tons of illegal fireworks in the cars of people crossing the border in 2009.

There's nothing Polish about "Polish fireworks" -- almost all the fireworks bought in Europe are made in China. But Germany is one of the few countries to have regulations on explosive power and the length of fuses, set by the Federal Institute for Materials Research and Testing (BAM). Only fireworks with the BAM seal of approval can be imported and sold legally in Germany.

"The so-called "Polen Böller" bought cheap in flea markets in eastern Europe have enormous explosive potential and their fuses are often too short," Klaus Gotzen, head of the German Pyrotechnic Industry Association,says. "It's easy for them to go off in your hand and do some serious damage."

For retailers, the holiday is big business in the days just after Christmas: Germans spend more than €100 million ($144 million) each year on fireworks, the vast majority to be set off on New Year's Eve. According to the association, fireworks sales take off the last three days of the year, beginning on Dec. 29, and depend heavily on the weather -- a clear, dry New Year's Eve is good news for the industry.

Last year was a banner year. Fireworks sales totalled more than €109 million, mostly to men aged between 18 and 35. Explosions are a major part of the holiday's traditions, and the industry is hoping to match last year's sales numbers again. "Big fireworks shows have to be left to professionals," Gotzen told SPIEGEL ONLINE. "In Germany, New Year's is a chance for everyone to set off their own."

Thanks to the EU, this may be the last year for "Polish fireworks." Regulators in Brussels are expected to come out with EU-wide rules on firework quality and safety in 2010. When that happens, the Roman candles and firecrackers sold in Warsaw will be the same as the ones on offer in Berlin. Perhaps then German authorities will have to start blaming Brussels for the annual rash of fires and missing fingers. 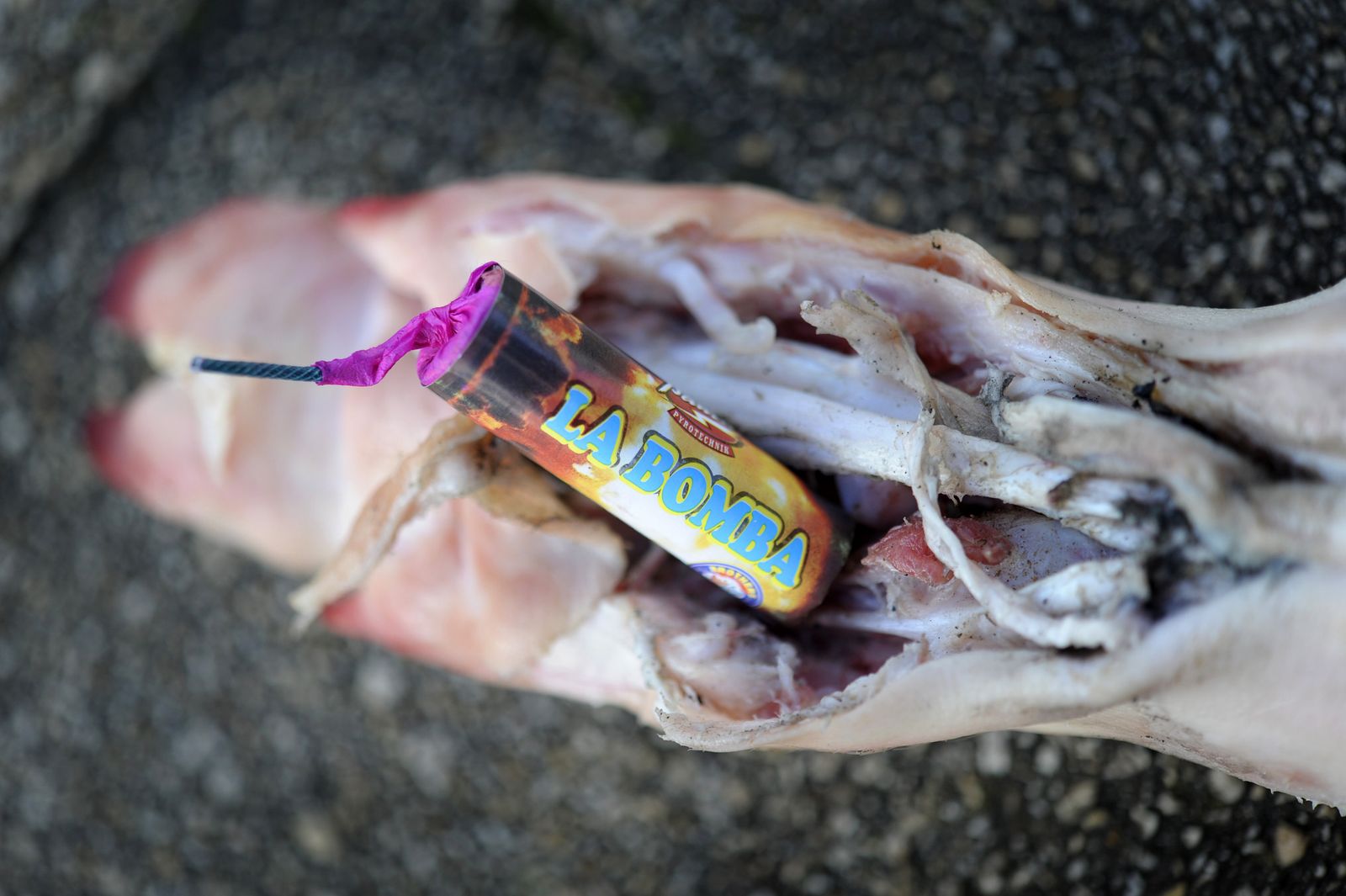 The Nuremberg fire department demonstrated the explosive power of an illegal firecracker -- the type often referred to in Germany as "Polish fireworks" -- by blowing up a pig's foot.