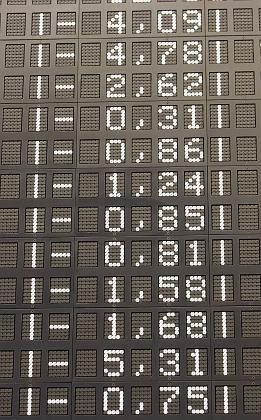 The reader board at the German stock exchange was not a pretty sight on Monday.

In a sign of how badly Germany's financial sector has been hit by subprime credit crisis, WestLB, the country's third-largest regional bank, announced on Monday it would post a €1 billion euro ($1.47 billion) loss for 2007 and would receive a capital injection from its owners, local community savings banks and the state government of North Rhine-Westphalia.

WestLB said that in addition to the loss it also expected to shoulder €1 billion in writedowns, and didn't rule out having to make further writedowns on top of that.

The announcement came a day after German financial watchdog Bafin and the country's central bank, the Bundesbank, attended an emergency meeting of WestLB to discuss stabilizing the lender. The presence of Germany's two top financial regulators at the meeting illustrated the urgency of the situation. Both attended similar meetings last year for subprime casualties IKB and SachsenLB and helped arrange financial rescues which averted the banks' collapse.

The owners are now seeking a merger with rival state lender Helaba and want to accelerate a planned restructuring of the bank, which media reports say will involve heavy job losses among its almost 6,000-strong workforce. The bank denied a Rheinische Post newspaper report that it wants to shed 2,000 jobs, half in Germany and the other half in its foreign operations.

WestLB got into trouble through speculative deals in major German stocks and through the US credit crisis, which started when US home owners were squeezed by falling property prices and rising interest rates.

Meanwhile, fears of a US recession led to sharp stock market losses on Monday with the German blue-chip DAX index falling as much as 7 percent, or more than 500 points, in hectic trading before stabilizing in late afternoon. It was the biggest daily decline since the September 11, 2001 attacks.

Financial stocks were among the main losers, with Commerzbank and Deutsche Bank down around 6 percent in the wake of the WestLB loss announcement. Insurance and banking group Allianz fell 7 percent.