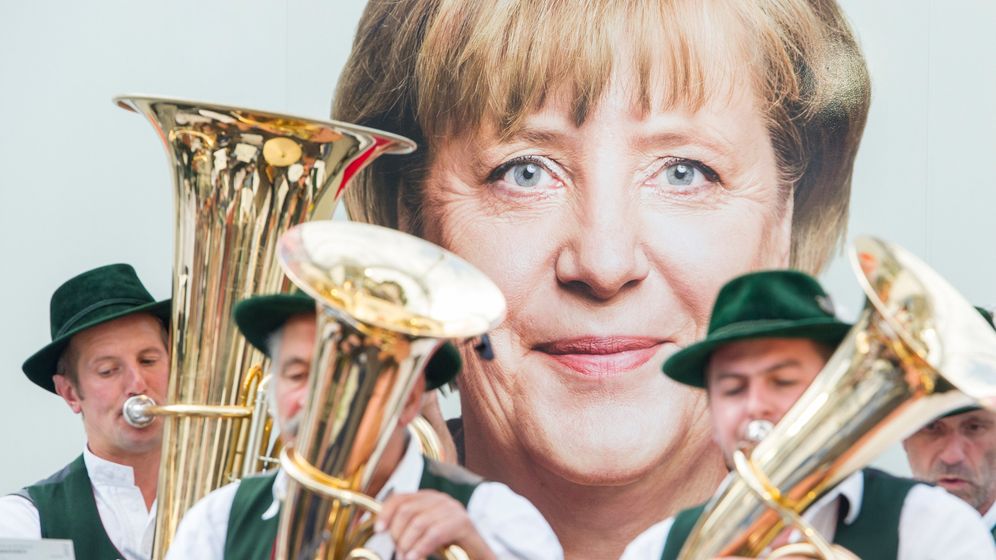 Election campaigns in Bavaria are all about performing well in beer halls, and Horst Seehofer, the charismatic governor of this proud state and leader of the Christian Social Union (CSU) party, is a master at that.

At the "Gillamoos" folk festival in the town of Abensberg earlier this month, he pushed all the right buttons in his address to a tentful of lederhosen and dirndl-clad voters, describing Bavaria as the "precursor to paradise" and waxing lyrical about Bavaria's footballing prowess by conjuring up the image of a Bavaria with its very own top football league.

"Then we'll make ourselves independent in that respect as well," he said, his trademark mischievous smile playing around his lips.

This Sunday's election in Bavaria, with its 9.5 million eligible voters, could influence the outcome of the general election a week later on Sept. 22 in a number of ways. At present, the vote appears to be a win-win prospect for Seehofer's conservative ally Angela Merkel, who is widely expected to cruise to a third term.

If Seehofer does well, she will be able to seize on the result as a sign of strong conservative momentum in the electorate. If he does badly, she can dismiss the vote as having been influenced by regional factors.

And if the pro-business Free Democrats (FDP), junior coalition partners in Seehofer's and Merkel's governments, lose in Bavaria, that could motivate tactical voters to give them a lift in the national election a week later, which could enable Merkel to win a third term with her current center-right coalition intact.

Unfortunately for the opposition Social Democrats, opinion polls suggest that the Bavarian vote will go Seehofer's, and therefore Merkel's, way. There is no appetite for a change in the region's government. Here are a few reasons why.

Bavaria, home to top companies including BMW and Siemens, is among the richest of Germany's 16 states, and has the lowest jobless rate at a paltry 3.8 percent. It regularly comes in at the top in comparative national education rankings and at the bottom when it comes to crime. Its capital city, Munich, regularly places in the Top 10 of rankings of the world's most liveable cities. It boasts half the nation's 1,200 breweries and hosts the annual Oktoberfest. To cap it all, it has the Alps.

Seehofer's CSU has ruled the state for over half a century and sees itself as the guardian of Bavaria's "laptops and lederhosen" way of life. It is currently polling at 48 percent, 28 points ahead of the SPD, which would probably be enough for it to gain an absolute majority of seats and jettison its struggling junior coalition partner, the FDP, which is polling just under the crucial five percent required to obtain seats in parliament.

"If the FDP fails in Bavaria it might motivate people to go out and vote for them in the general election a week later because they'd feel that Germany needs a business-oriented party in government," Heinrich Oberreuter, a political scientist at the Bavarian University of Passau, told SPIEGEL ONLINE. "And if the CSU does well, it will be a strong signal for the conservatives overall."

The CSU's status as an independent party firmly anchored in Bavaria gives it a long-term structural advantage over rival parties like the SPD that are regional branches steered by leaders in Berlin, said Oberreuter. "The CSU can decide itself whether to be a purring tomcat on Merkel's lap or if it scratches her on the chin."

Seehofer, 64, likes to get his claws out now and again to assert his own, and Bavaria's, political independence. His proposal for a road tax for foreigners using German roads was pure election rhetoric that embarrassed Merkel in her campaign. She eventually slapped it down, but the issue did him no harm in opinion polls.

After all, Bavarians like a leader who can stand up to "Mutti" Merkel, and there are precious few of them around. To remain with the cat analogy, most of her political rivals in the conservative camp have been either put down or neutered in her eight years in power.

Voters have forgiven Seehofer his blatant U-turns from being pro-nuclear to anti-nuclear, from wanting university fees to abandoning them, from backing military conscription to agreeing to its being scrapped. They have also forgiven him his personal transgressions. The married father of three has a child with another woman -- a mortal sin in a staunchly Catholic party like the CSU, or so one might think.

But the CSU is no longer the arch-conservative party it once was. "The CSU has modified its ethical Christian values to adapt to changes in society," says Oberreuter. It has embraced some core SPD policies along the way and has successfully nurtured its image of being virtually synonymous with all things Bavarian, like lederhosen, oompah bands and cowbells -- and of catering to Bavarians of all classes.

Man of the People

To that end, Seehofer, the son of a truck driver, likes to stress his modest upbringing and recalls how each payday his mother sent him and his brother to pick up his dad to make sure he didn't blow his income on the way home.

"His message is, 'I'm one of you, I care for the little man but I also move among the big and powerful and make sure your interests are represented,'" said Oberreuter.

Seehofer, who served as agricultural minister in Merkel's first government from 2005 until 2008, took over as Bavarian governor following the 2008 regional election in which the CSU, led by an unpopular duo of politicians at the time, slumped to just 43.4 percent, missing an absolute majority for the first time in over four decades. It was a disastrous result for the CSU and forced it to form a coalition government together with the FDP.

But Seehofer has evidently managed to draw a line under the past and appears posed to restore the CSU's absolute majority in Bavaria.

Seehofer's SPD rival Christian Ude, faces an almost impossible battle to unseat him, even though Ude has been credited with doing a good job as mayor of Munich and manages to tap the first Oktoberfest barrel with just two hammer blows most years -- an important skill for a Bavarian politician.