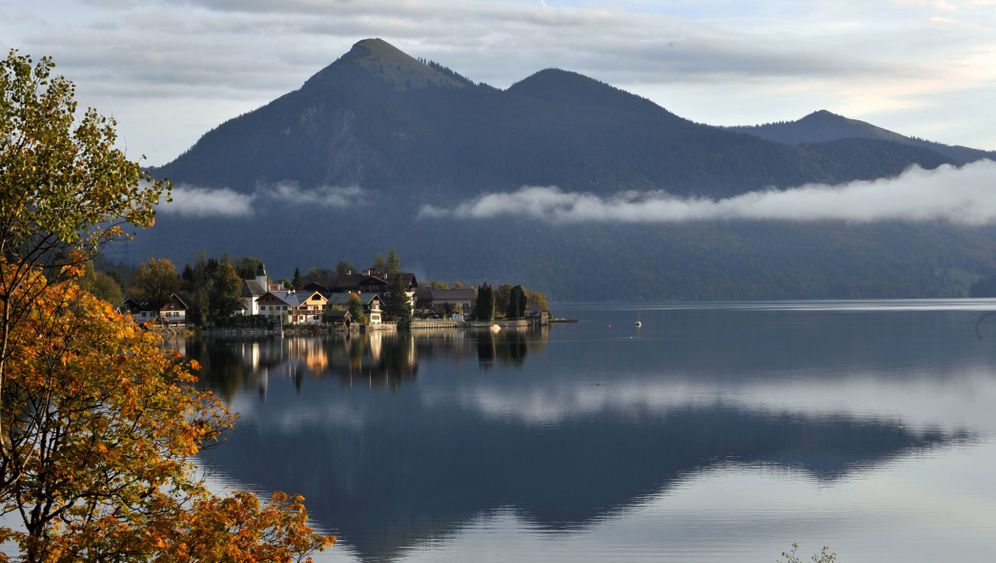 A toll road winds its way between the forest and the meadows, passing by homesteads with plenty of flowers but few residents. It's quiet in the Sonnental Valley deep in the Bavarian south near the German border to Austria. Around the last bend, the glittering and crystal blue waters of Lake Walchensee heave into view. Jachenua, Bavaria's smallest independent municipality, appears to be the village that time forgot.

Forest covers 90 percent of the area -- which is sparsely populated, with just seven people per square kilometer. But it is a beautiful mountain landscape, with some 45,000 guests spending the night in Jachenau each year. Tourists love its earthiness, which goes hand-in-hand with a traditional emphasis on organic foods and sustainability. Farmers sell their products in the local store and local council secretary Georg Aschenloher attends to business in the town hall sporting lederhosen and a small moustache.

Signs of the village's environmental conscience are also visible. The nearby Walchensee Power Plant has been in operation for 90 years, generating clean hydroelectricity from the incline between two lakes. Polluting technologies and even nuclear energy are completely alien ideas to local residents. But here, at this idyllic vacation site of all places, the downside of Germany's move to phase out nuclear energy and switch to renewable energies, the so-called Energiewende, will soon be felt.

Energieallianz Bayern, a grouping of 32 energy companies that are for the most part owned by municipalities in the southern German state, want to build the basin for a giant pumped-storage power plant at a height of 1,380 meters (4,527 feet) on the local Jochberg Mountain in the pre-Alps. The plan foresees pumping 3 million cubic meters of water up into a 30-meter deep asphalt reservoir that will be roughly the size of 30 football fields.

Next to the reservoir, an underground tunnel will lead to Lake Walchensee. When sun and wind help produce surplus electricity, pumps will go into action to drive the water from Walchensee up to the reservoir on the mountain. During energy consumption peaks, the water can be directed down the tunnel through turbines and back into the lake to generate electricity. Without these kinds of pump storage facilities, Germany's transition from nuclear to sustainable energies would be nearly impossible.

But the project is creating a quandry for the environmentally conscious residents of Jachenau and neighboring Kochel am See. Of course they know that energy needs to be stored; and the Bavarian Alps region, with its many lakes and mountains, is perfectly suited for these kinds of pump-storage stations. There's water in the valley and also the gradient needed to generate electricity. The only thing missing are the reservoirs at higher elevations. Lake Walchensee is particularly well suited to the project because electricity is already being generated there and the power masts needed to transport the energy are in place. The new pumped-storage plant project here is slated to cost €600 million ($814 million).

The highest price, though, may be paid by local residents. The construction time required for the project is estimated to be five years, a time during which an endless stream of noisy trucks will make their way up and down the mountain, day and night. Wide roads will have to be built through the forest up to Jochberg Mountain, and it's possible that a concrete factory will have to be built on site to support the project. Rock and boulders from the tunnel will be dumped to create a wall around the reservoir. Throughout the building process, the village will be noisy, dusty and smelly.

But the situation could be even worse for the Jocheralm, which is considered one of the most beautiful alpine meadows in Germany. On sunny summer days, as many as 500 hikers can be found on the trails here. If Energieallianz moves forward with its plans, it would all be submerged under water. Huts located in the meadows would have to be moved and those sitting outside on the banks would no longer get to enjoy vistas of content cows and lush meadows. Instead they'd be confronted with a metal fence in front of an asphalt reservoir.

'We Aren't Being Given any of the Facts'

Energieallianz plans to begin regional planning procedures for the pumped-power plant next year. It could face challenges though. Three of the farmers whose meadow property would have to be leased for the project to proceed haven't signed any preliminary agreements and could still refuse to allow their properties to be used. They claim they have not yet been informed how much land the reservoir will ultimately require and the degree to which it will infringe on the local nature.

"We aren't being given any facts," laments Kochel Mayor Thomas Holz. "They can't just try to take hold of our land without telling involving the people."

Meanwhile, Georg Riesch, the head of the local council in Jachenau, adds, "No one has told me precisely how the long construction phase is gong to affect the valley."

For its part, the Energieallianz has remained tight-lipped on the issue, even as resistance grows. Germany's Association for the Protection of the Mountains (VZSB) has called on residents to protest the project.

Still, there's little hope the communities can rely on support from the state capital in Munich. Officials at the Bavarian Environment Ministry have said they do not want to interfere with the project because a report is forthcoming that will recommend the best possible sites for pumped-storage power plants in Bavaria. The problem is that the report will first be completed in 2014.

In the meantime, the Jochberg project remains in the frontline of Germany's complicated transition away from nuclear energy.