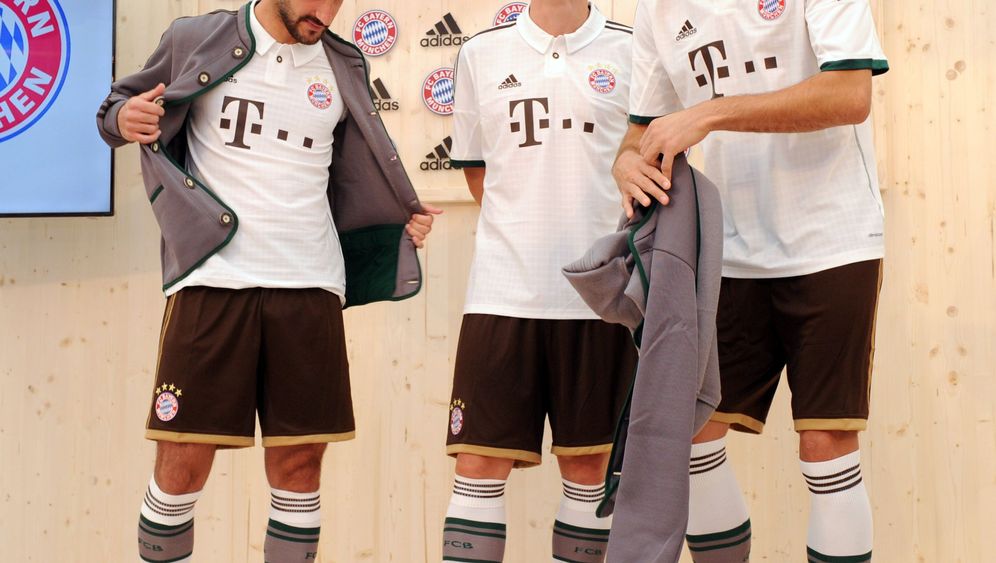 They may be the reigning champions of Germany and Europe, but Bayern Munich is determined to stick to its roots. The Bavarian football giants unveiled special Oktoberfest-themed away uniforms including lederhosen-style shorts with club crest, socks with Loferl (calf warmers) motifs and collared white shirts. There is also an Alpine parade jacket for training and a hat described as "jaunty" on the team's website.

Football clubs have often been criticized in the past for introducing new jerseys too often by angry parents who must buy expensive replicas for their kids. But surely there won't be too many complaining about FC Bayern recognizing the impact of Munich's annual beer festival, which begins this year on Sept. 21.

For most at Bayern, the new uniforms will merely be a continuation of trips to Oktoberfest in recent years, when all the players -- including foreigners such as Frank Ribéry and Arjen Robben -- don lederhosen. Even new trainer Pep Guardiola recently purchased his first traditional outfit. Bayern's homegrown players like Bastian Schweinsteiger, club captain Philipp Lahm and goalkeeper Manuel Neuer will undoubtedly take to the new uniforms like a Bavarian to beer.

The lederhosen duds will mainly be worn for matches away from Bayern's Allianz Arena home in Munich, although the uniform will make its debut there against Hannover 96 on September 14. Usually, Bayern wear their famous red shirts at home.

Lahm, who is also the captain of the German national squad, told the FC Bayern website: "This is a bit special. We've never had a shirt like this before. It's a very good fit to us."

Schweinsteiger, born and raised in Bavaria, also praised the "super idea." He said: "We come from Bavaria, and the world-famous Oktoberfest belongs to the state, so I think it's very good for us to have this shirt."

The launch topped a good week for Bayern, who claimed the European Super Cup to add to last season's historic treble of trophies -- Bundesliga, Champions League and German Cup -- after needing extra time and penalties to see off English challengers Chelsea. The Super Cup is played each year between the winners of the Champions League and the Europa League.

It was sweet revenge for Bayern, who had lost to Chelsea on penalties in the 2012 Champions League final in their own stadium after dominating the Londoners for large periods of the match. They made up for it with a memorable 2-1 victory over German rivals Borussia Dortmund this May at London's famous Wembley Stadium.

The city of Munich, meanwhile, is gearing up for the 180th Oktoberfest, with more than six million people from around the world expected to attend the Wiesn fairgrounds over 16 days.