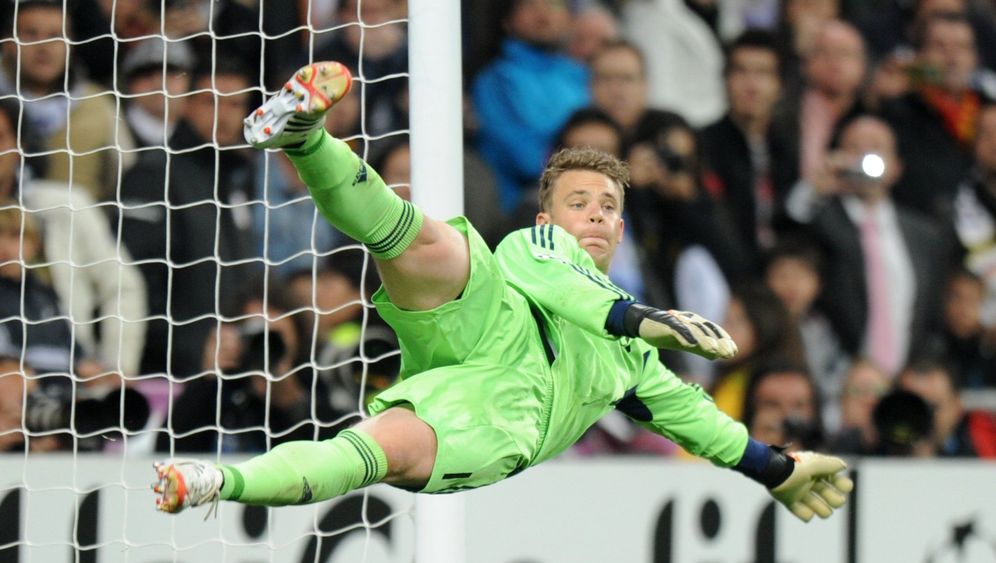 Germany's newspapers were awash in superlatives on Thursday morning following the dramatic Champions League semi-final victory of the country's soccer heavyweight Bayern Munich over Spain's Real Madrid on Wednesday night. The 3:1 last-minute win that secured their spot in the tournament's final was described as "electrifying," "magical" and "grandiose." It was an "epic drama" in which the "heroes in red" played with "courage," papers wrote.

And goalkeeper Manuel Neuer, who saved the game by deflecting two shots in an extra-time shootout? He was a "titan." With multiple articles outlining every possible aspect of the game headlining most major German news outlets, the country was clearly revelling in the team's triumph.

The win also sparked raucous celebration in the team's hometown, the Bavarian capital Munich, where on May 19 they will face Chelsea after the English side knocked defending champion Barcelona out of the tournament on Tuesday. Thousands of fans gathered in the city center to carouse when the nerve-racking second leg of the semi-final, which was being played in Madrid, finally finished at 11:23 p.m. Honking motorcades full of flag-waving Bayern supporters forced police to block off streets as fireworks blasted into the night sky. Meanwhile, local beer gardens and bars that showed the game were overflowing with fans shouting team chants and singing "We Are the Champions."

Relief among both fans and the players was palpable after the breathless battle on the field. Playing against the background of an overwhelming crowd of Spanish fans at the packed Bernabéu stadium in Madrid, the team managed to turn the game around in extra time after Real striker Cristiano Ronaldo had cancelled out Bayern's first-leg victory with two goals within the first several minutes.

A penalty goal from Bayern Munich forward Arjen Robben, and renewed intensity from the team in the second half, evened out the score, but after extra time Real's 2:1 lead meant that the two sides were still locked in a 3:3 aggregate score, forcing a nerve-rattling penalty shootout. But thanks to a dramatic goal from midfielder Bastian Schweinsteiger and impressive saves by goalkeeper Manuel Neuer, Munich left the pitch victorious.

All Hail the Goalkeeper

The 26-year-old Neuer, who is also goalie on the German national side, was without question the most celebrated player of the night, proving himself to be well worth the €25 million Bayern Munich paid to pluck him from his home team FC Schalke 04 ahead of this season. He played "phenomenally well," said German national coach Joachim Löw. "His presence in the goal, especially during penalty kicks, gave one the feeling that the goal was tiny -- that's how large he made himself."

Neuer modestly refused to take all the credit, though. "I'm not the big winner, we all are," he said after the game. "I just did my part in what added up to a victory."

Real Madrid coach José Mourinho was reportedly so impressed by his opponents' performance that he visited their locker room after the match to deliver his congratulations personally. Some of his players had left the pitch in tears. "It's a big blow for us," said goalkeeper Iker Casillas. "It was a very exciting game, but penalties are always a lottery. We played well, but Bayern are a great team."

The Champions League final at the Allianz Arena in Munich was arranged in advance, and Bayern's victory means that they will be the first team to ever play a final match on their home turf. They've had a somewhat disappointing season in Germany's national league, the Bundesliga, where they are hopelessly trailing leader Borussia Dortmund as the season's end nears. But the Champions League final will be a welcome chance to prove that if not in their home league, they can at least become Europe's top team. "We're overjoyed, and this is a great reward for our fans," Neuer said. "Now this season is definitely not ruined for us."

Team captain Philipp Lahm said that playing for Bayern comes with the expectation of winning big titles. But first, he said, "I'm going to enjoy a beer -- after all, we're Bavarians." Alongside the festivities back in Munich, celebrations at the post-game banquet in Madrid reportedly went on late into the night.