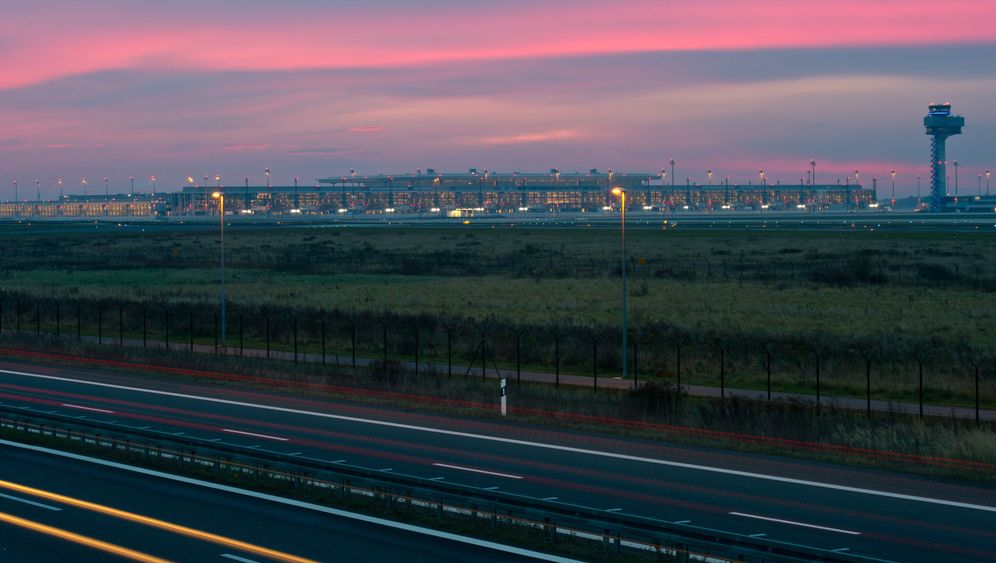 The delayed opening of Berlin's new international airport has caused a lot of hand-wringing and finger-pointing, but for Björn Melhus it has been especially tough to take.

"It's been a really painful experience," says the Norwegian-German Berlin resident, who creates experimental films and other media projects. He was among the six artists commissioned to create pieces for the Berlin Brandenburg Airport, also known as BER.

His idea was to create a smartphone application to call up a virtual 3D family stranded in the airport when placed in front of specific markers. "When I pitched the concept, it was uncertain whether it would work technically," Melhus says. But after working with a 10-person team for one and a half years, "Gate X" was finished in May 2012, one month before the airport's scheduled opening date.

The airport, however, did not open. The date has since been pushed back several times, and now remains at least a year away. "A delay of a few months would have been bad enough," says Melhus. "But the date in October was downright terrible, and now we've reached a point where they are saying 2015. I never thought it would be such a disaster."

While the holdup has been disappointing for the other five airport artists who were looking forward to getting a big public audience for their work, for Melhus it has been especially problematic because his work is so technology driven, says Edzard Brahms at REALACE GmbH, the agency that handled the airport artwork.

Airport planners hired his agency several years ago to select artists, place the work and coordinate technical requirements. Artists were tasked with addressing the theme of land and air to engage visitors, said Brahms.

"All the artists worked at a crazy pace so that they could finish on time," said Brahms. "So it is naturally a shame that the art is finished and they are waiting for the airport."

Stranded at the Airport

Melhus, whose work often explores themes of home and roots, was initially excited about the idea of creating art in an airport. At the time his pitch was selected in the artwork competition, he was traveling frequently between New York and Europe, spending a lot of time in airports.

With Gate X, he wanted to call attention to the "no man's land" feeling of being in an airport, where travelers are anxious to get off the ground and fear being stranded. The piece "imagines the airport terminal as a provisional home for these computer-generated, phantom inhabitants," says Melhus.

His team placed markers in 24 different areas throughout the different gates. Visitors use a free Gate X app they download to their iPhones or Android devices to see a virtual family, which features a mother, father and child who live in the airport. Trapped in the virtual Gate X, they do yoga, cook, sleep and even grow cucumbers out of a suitcase. People can take pictures of themselves with the family and post them to Facebook or send them to friends.

"It has lots of irony," says Melhus, who based the characters on digital in-flight safety videos.

The app also features a tongue-in-cheek airport survival guide for people trapped in the airport, with advice on how to find the most affordable, calorie-rich food and getting into the best position for seated naps.

But the longer the delay goes on, the more quickly the work becomes outdated, says Ivo Wessel, a Berlin-based programmer who worked with Melhus to develop the airport app. He says Melhus's work was pioneering in combining art with virtual reality, and would have been the first virtual airport project of its kind. "With this project we entered a new world," says Wessel, adding that he was also disappointed by the construction delays.

Part of the project's original appeal was its ingenuity, but with the delay it's only a matter of time before the idea takes root elsewhere, Wessel says. Though other types of art can certainly also become outdated, "the half-life of this kind of project is much shorter than a classic installation," he says.

Because the piece simply needs a marker and a smartphone to work, Gate X could theoretically be shown anywhere. But Melhus says that it doesn't make sense outside of the context of the airport. He's also prohibited from selling the piece to another airport.

"At first we were making a virtual app for an airport that existed," says Wessel. "Now we have an app for a virtual airport."

For other airport artists the delay has been frustrating, but not nearly as painful. Oliver Störmer and Cisca Bogman, a husband and wife team who call their collaboration STOEBO, are among them. In 2011, they began working on their project to embed constellations in the floor using coins from around the world. They spent a year collecting 5,000 coins, mostly buying them on eBay and then logging their width and thickness in a digital catalogue. Then they drafted a computer layout of two constellations, one to be embedded in the floor of the baggage claim area and one just outside in arrivals.

Starting in March 2012, their team spent nine weeks drilling holes in the airport floor and gluing in the coins, creating special drilling machines for the work. Now wooden planks cover the coin constellations to protect them from ongoing construction.

"It's a pity for us that we can't yet display the work," which was originally about entertaining and exciting people walking through the airport, says Störmer.

"But the delay and cost overruns give new meaning to our work," he says. "It could now be about spilling money on the floor."