Berlin has long had a reputation as a cheap place to live, especially when compared to other major Western European cities. But recently, soaring rents have threatened that image. The rise in prices has been exacerbated by the popular practice of renting out apartments exclusively as vacation accomodations. Berlin's senate now plans to change that by introducing rules banning these apartments.

The Law on the Prohibition of Misuse of Housing was passed by the city-state's senate on Thursday amid rising anger over not only a lack of affordable apartments, but also complaints of constant parties, noise and rubbish generated by tourists staying in such short-term rentals.

According to official estimates, 12,000 apartments have been taken off the long-term rental market for this more lucrative purpose -- they are seen by landlords as a good way to get rid of unwanted tenants and increase the yield on their investments as increasing numbers of tourists flock to Berlin. Websites such as Airbnb make the process of renting out apartments for short stays easy and economical.

The law provides for the possibility of restricting the ban to the worst-affected neighborhoods, and also allows for exceptions where the public interest is served, such as housing for asylum seekers, medical surgeries, nurseries or child-care providers. The ban does not apply to fixed-term leases for workers posted to the city, au pairs, interns or embassy staff, stressed Iris Spranger, a member of the center-left Social Democrats (SPD), the senior partner in State of Berlin's ruling coalition. It is unclear how the new rules would affect people who rent out their own apartments for short periods when, for example, they are out of town.

Speculative vacancies -- where landlords leave properties empty for more than six months -- and the demolition of apartments have also been made much more difficult. According to the Berliner Zeitung newspaper, Michael Müller, the SPD senator for urban development, said, "We are creating the law so that the uncontrolled growth on the housing market is no longer possible." Details of the law will be laid down in an ordinance which will be passed by March at the latest, Müller added, but are set to include heavy fines for those who don't follow the rules.

Some critics are angry about the length of the transitional period for the law, which allows landlords two years to register and adjust to the new rules. Katrin Schmidberger, a member of the Berlin parliament for the Greens. She said: "They are giving the operators of these vacation apartments a two-year carte blanche to simply carry on as before."

There also concerns that the individual districts do not have the manpower to cope with the necessary inspections and processing of applications.

But many Berliners will, above all, be anxious to see if the new measures have an effect on rents, or make it easier to find an apartment. According to Matthias Brauner of the center-right Christian Democrats (CDU), the junior partner in the coalition, the move should see between 8,000 and 12,000 apartments within the city's orbital Ringbahn railway come back onto the market within two years.

The Chamber of Industry and Commerce, however, had already dismissed the law as a "housing policy placebo," with no scope for an increase in supply of apartments until 2016. The Association of Berlin-Brandenburg Housing Companies, meanwhile, said the introduction of a few thousand apartments was just a drop in the ocean compared to the huge influx of people to the city, and that massive new construction was needed.

And according to the Tagesspiegel newspaper, the Berlin Apartment Alliance, a group of 25 holiday apartment operators, dismissed the law as actionism. "We should not be punished for the long-lasting failures in housing policy," said Immanuel Lutz from the alliance. 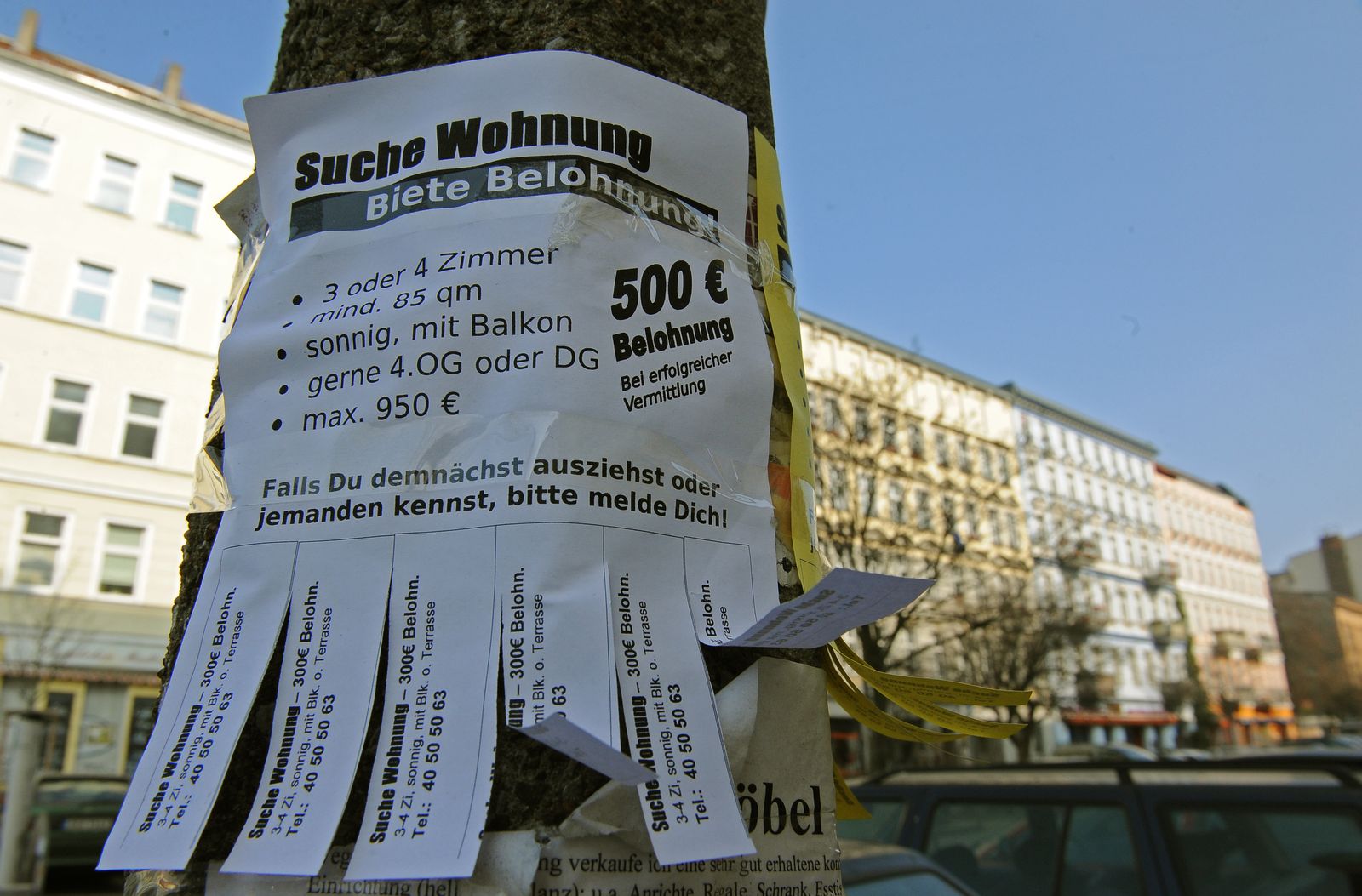 A sign from someone looking for an apartment in Berlin's Prenzlauer Berg district. The Berlin senate hopes to make more housing available by banning short-term vacation apartments.