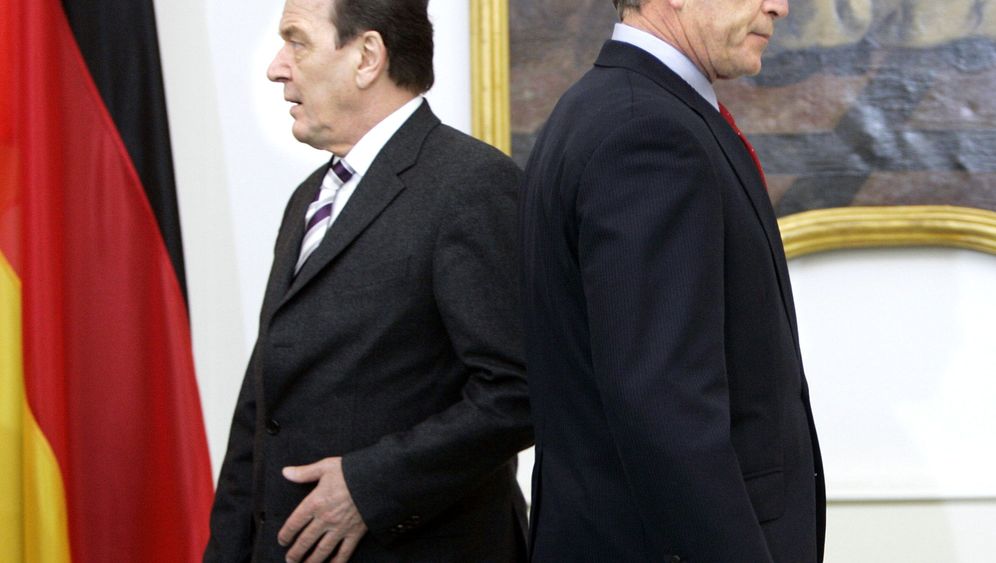 Photo Gallery: Making the Case against the Iraq War

Gerhard Schröder and Joschka Fischer made every effort they could. The German chancellor and foreign minister spared no effort with their appeals, whether in public or private, in small groups or with the eyes of the entire world upon them. In the end, though, it was all for naught. Then-United States President George W. Bush wouldn't allow anyone to change his mind. He was dead set on launching a war against Iraqi dictator Saddam Hussein and thereby bringing "freedom," as he put it, to the Middle East. It was a freedom that Bush described as " God's gift to mankind."

Over time, however, this would-be gift from God has grown to become the biggest foreign-policy disaster in US history since the Vietnam War. The and its subsequent occupation has cost more than 100,000 Iraqi civilians and over 4,000 American soldiers their lives. Washington's credibility has been severely damaged, and Iraq will remain a trouble spot for the foreseeable future.

It is facts like these that have helped stoke the outrage since Bush recently published his memoirs, "Decision Points," in which he claims that Schröder -- the very man who won re-election in 2002 in large part based on his opposition to the war -- assured him in January 2002 that Germany would support the United States if it decided to go to war against Iraq. For his part, Schröder was quick to deny Bush's comments, claiming instead that "(t)he former American president is not telling the truth."

SPIEGEL has now obtained a previously secret copy of notes taken from a conversation in February 2003 marked "Classified Information -- For Internal Use Only." At that time, in was just a matter of weeks before US soldiers invaded Iraq. Klaus Scharioth, a Berlin-based state secretary in the German Foreign Ministry, had flown to Washington in the hope of still having a chance of changing the minds of Condoleezza Rice, Bush's national security adviser at the time, and other high-ranking members on the National Security Council.

According to the notes -- all in German -- the meeting amounted to 90 minutes of verbal blows, which primarily stemmed from Rice's "relatively rigorous and uncompromising" defense of the US position. The same notes indicate that Scharioth didn't budge an inch toward Washington, either. In retrospect, though, they document a high point in German diplomatic history, because the objections and predictions put forward by Berlin on that Tuesday have turned out to be legitimate and correct.

The crux of the German argument was that the political costs of a war in Iraq would be "higher than (the) political returns." While Rice predicted that Iraq would take advantage of the "opportunities for reconstruction" like the ones Germany enjoyed after 1945, the delegation from Berlin countered that the rapid establishment of a democracy in Baghdad was "not (to be) expected."

The Germans also predicted that the real beneficiary of a war in Iraq would actually be Iran, and that a US-led attack would further complicate efforts to reach a solution in the conflict between the Israelis and Palestinians.

Likewise, they prophesized that going to war would precipitate a "terrorist backlash." Scharioth stressed that it was important "to win over the hearts and minds of the Muslim elite and youths," according to the notes, and that this was "not to be achieved" by going to war. He also added that doing so would greatly increase the danger of prompting an "influx to Islamic fundamentalism and terrorism."

This remarkable conversation was held just a few days after the now-infamous speech that then-US Secretary of State Colin Powell delivered in New York before the UN Security Council. Powell had presented what he apparently considered to be proof that Saddam Hussein possessed weapons of mass destruction. But Berlin sensed that the evidence in no way substantiated Powell's claims.

With his speech, Powell wanted to convince the Security Council to give a green light to war. Less than three months earlier, the Security Council had passed Resolution 1441, which threatened Iraq with "serious consequences" if it was found to have committed any "material breach" of arms-control sanctions. Since the end of 2002, inspectors with the United Nations Monitoring, Verification and Inspection Commission (UNMOVIC) and the International Atomic Energy Agency (IAEA) had been conducting searches in Iraq for nuclear, biological and chemical weapons -- though obviously without any success.

During this time, the Americans were growing impatient because they wanted to launch their attack before the onset of the heat and sandstorms accompanying the warmer months of the year. This, in turn, prompted Rice to push for action in a conversation with Scharioth. She argued that "everything had been tried"* over the last 12 years but Saddam Hussein has "always misled, hidden and stalled."*

In response, Berlin called for the inspections regime to be intensified and for the inspectors to be given more time. Chancellor Schröder even teamed up with then-French President Jacques Chirac and then-Russian President Vladimir Putin, forging an alliance on the Security Council, of which Germany was a non-permanent member in 2003. Rice justifiably complained that the Germans were apparently pursuing the goal of "preventing the United States from going to war."*

In the end, none of it helped. The United States went to war without any backing from the United Nations. On March 20, 2003, the bombing of Baghdad signaled the start of Operation Iraqi Freedom. And, from there, destiny ran its course.

* Please note that the asterisk following a quotation indicates it was translated from the German classified document and may differ slightly from the original, verbatim English quote.