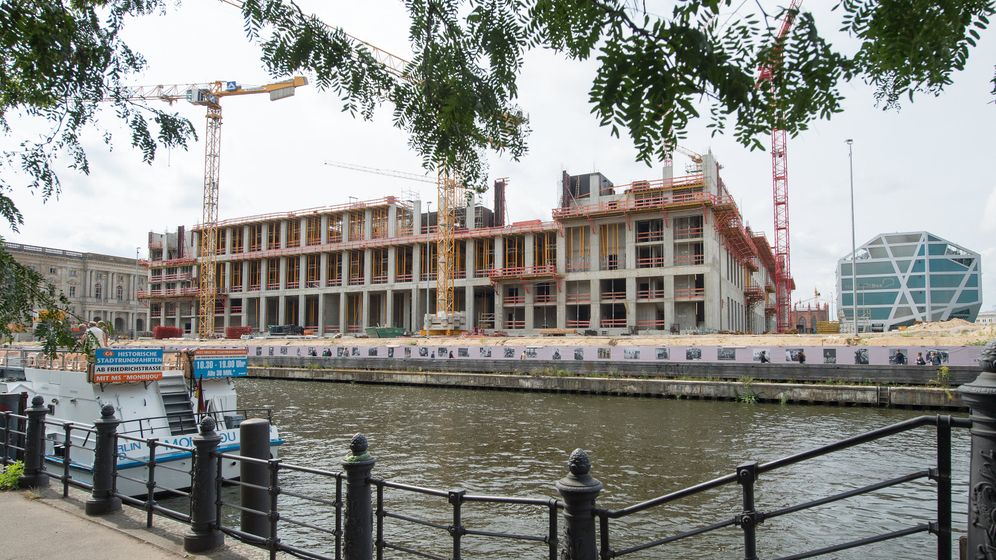 The plans call for nothing less than the rebirth of the Prussian-era heart of Berlin. A new palace is currently under construction on the German capital's famous Museum Island to replace the Berlin City Palace, or Stadtschloss, the erstwhile residence of Prussian kings and German emperors that was demolished by the communists soon after the end of World War II. And the façade of the new structure is to recall the grandeur of Berlin's pre-20th century past.

But completion of the exterior may be in doubt. The necessary private funding for the façade has fallen well behind expectations, meaning that the new Prussian palace could end up being nothing more than an unattractive concrete box besmirching the banks of the Spree -- and just as unsightly as the asbestos-ridden building controversially torn down to make room for it: The East German-era Palace of the Republic.

Earlier this month, Manfred Rettig of the Berlin Palace-Humboldtforum Foundation -- the organization behind the new palace -- presented a report indicating that just €15.7 million has thus far been collected. That, though, is a far cry from the €80 million ($99 million) needed to give the €590 million structure, set for completion in 2019, the Baroque exterior called for in the plans. What's more, Berlin's city-state government is interested in backing out of the project altogether.

The document also indicates that money for the palace dome, interior portals and rooftop restaurant is also missing. A total of €28.5 million is necessary for those elements, but only €8.6 million has been collected.

Jumping into the Gap

The idea to rebuild the palace was first born in the 1990s, and since then, palace fans and donation collectors have been promising that sufficient private money would flow in once plans for the reconstruction became manifest. But work has long since begun: Some 100,000 cubic meters of concrete have already been poured and the topping out ceremony is set for next June.

The federal government is unlikely to jump into the funding gap. "There will not be a single additional cent from the state than the already agreed €478 million," says Green Party parliamentarian Sven-Christian Kindler, the Budget Committee member who tends to the palace. Tax payers, he continues, should not be made to pay "for luxury elements and the expensive façade of this dubious prestige project."

Rettig and the rest of the Berlin Palace-Humboldtforum Foundation's leadership are doing their best to project optimism. On a recent dreary November day, he leads the way through the shell of the palace, stopping near the entry hall. It is here where state receptions and gala dinners are to be held once the palace is finished. "It will be an A-plus address in Berlin," he gushes.

He then continues through halls that will one day provide a new home to Berlin's Ethnological Museum and to the Museum for Asian Art. A branch of the Berlin city-state central and regional library was also part of the original plan and Humboldt University will also find space here. Furthermore, Rettig dreams of "large events" such as concerts by leading German artists in the vast interior courtyard.

To generate the donations necessary for the façade, Rettig is now planning a nationwide advertising campaign to correspond with the topping-out ceremony. The hope is that the federal government will pick up the tab for the ads with the Ministry for Environment, Nature Conservation, Building and Nuclear Safety having already applied for an increase to the palace foundation's budget. Internal documents show that organizers plan on placing advertising in seven of the country's largest cities at a cost of €360,000. The federal government is being asked to make €250,000 available.

The foundation, though, could be facing a situation in which it will have to come up with much more money than originally thought. Even as construction continues apace, the Berlin city-state government is reconsidering plans for opening the regional library inside the new palace.

Current plans call for the library to occupy 4,000 square meters (43,000 square feet). But more than a flagship presence in the new palace, the city's libraries really need a brand new building to replace the dilapidating pair of structures currently housing its collection. Should Berlin pull out, of course, the museum space in the palace, thus far planned at 23,000 square meters, could simply be expanded. Not only could the federally owned museums use the extra capacity, but it would also sharpen the palace's profile -- making it more of a museum than an all-purpose edifice.

Yet a conflict over money is brewing. Berlin contributed a part of the real estate the palace sits on and also made money available for construction. Last summer, the city-state calculated its share at €83 million, money it would like to see reimbursed from the federal government if it backs out of the palace. Federal government officials, for their part, found the demand exorbitant but have yet to make an acceptable counter-offer. Berlin's mayor designate, Michael Müller, is intent on negotiating his city's withdrawal before his planned election in December, city sources say.

For Rettig, a Berlin pull-out would be a catastrophe. The space planned for the library has already been laid out according to the city's specifications and during the tour of the building, Rettig pointed out spaces specifically designed for glass cubicles where visitors could read a book or watch a film. Rettig knows that changing plans after construction has begun can lead to rapidly rising costs. "I won't be a part of that," Rettig says. "If it happens, I will resign."