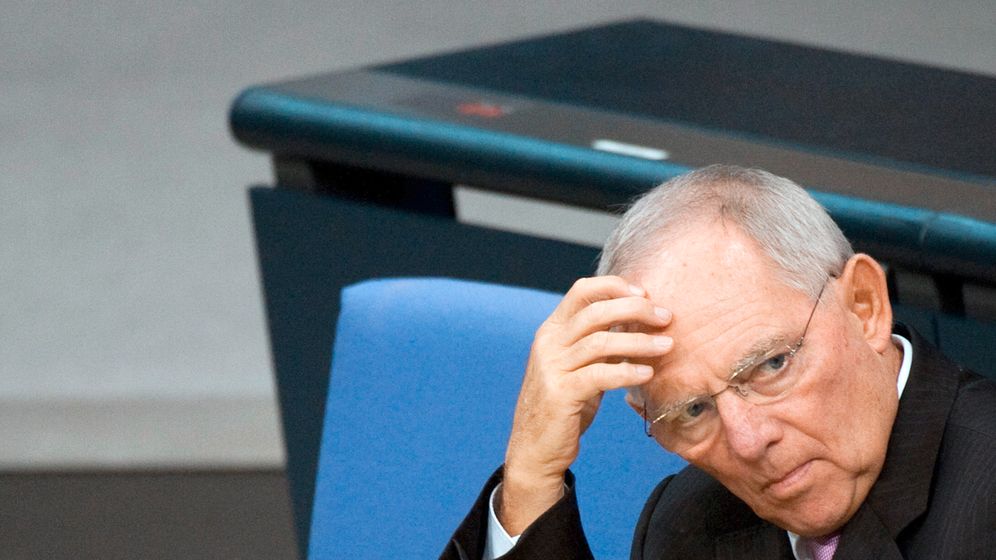 German Finance Minister Wolfgang Schäuble has an inimitable way of misleading his listeners with a torrent of obfuscating words. When asked if the Greek bailout would cost more money, he responded: "Not necessarily," adding that there was merely "a greater financial requirement on the timeline."

It could soon be a similar story with yet another gem from Schäuble's repertoire of quotations. "Germany is clearly a gainer from the euro," as the minister likes to say. But if what his team has been writing over the past few weeks is true, Germans will soon find that their presumed winnings have transformed into losses. The government in Berlin is living in a dual reality. Strategists in the center-right coaliton parties are planning to enhance benefits for families, pensioners and the long-term unemployed in a bid to woo voters in the upcoming elections.

By contrast, due to the economic slowdown, experts in Schäuble's ministry are anticipating an entirely different scenario: The next government -- no matter who will be chancellor and which parties will be in power -- won't be able to boost spending. Instead, it will have to impose rigorous spending restraint.

According to the recommendations made by Schäuble's team, in order to brace itself for the consequences of the euro crisis, Germany will have to drastically increase taxes and make painful cuts in social services over the coming years.

These ideas don't fit with the current political climate in Germany, which has been characterized for months by a passionate debate about how additional money could be used to combat poverty among the elderly and improve life for low-wage earners. Schäuble nevertheless feels that his experts' forecasts are realistic. He has expressly approved their proposals and ordered them to continue to work on the cost-cutting program. At the same time, he has ordered strict secrecy to avoid any adverse effects on his party's campaigns for the upcoming state election in Lower Saxony in January and the general election in the fall of 2013.

The Germans face a bitter déjà vu. It was only 10 years ago that then-Chancellor Gerhard Schröder of the center-left Social Democrats (SPD) and his conservative challenger Edmund Stoiber fought an election campaign that was primarily focused on social justice. After Schröder's victory, it became clear that Germany was strapped for cash. Subsequently, the chancellor introduced his radical -- and widely unpopular -- "Agenda 2010" reforms of the labor market and welfare system. This time, Schäuble's team has calculated that even deeper cuts may be needed.

What the Finance Ministry officials have listed under the seemingly innocuous title "Medium-Term Budget Goals of the Federal Government" is nothing less than the most comprehensive austerity program in postwar German history. In order to avoid forcing the government to incur additional debt, the officials are scrutinizing subsidies, entitlements and welfare benefits worth tens of billions of euros.

There are also plans to raise taxes. Finance Ministry officials propose increasing the reduced VAT rate of 7 percent -- which currently applies to such items as food, books and tickets for public transportation -- to the regular VAT rate of 19 percent. This alone would allow the state to collect an extra €23 billion ($30 billion) every year.

Schäuble's team wants to slash €10 billion from the federal government's contributions to the German health fund, which currently helps to stabilize premiums in the statutory health insurance system. At the same time, they know that Germany's statutory insurers will require more money over the coming years as the population's life expectancy increases. This has led them to consider introducing a surcharge on income tax to support the system. The experts call this a "health solidarity tax."

The plan also calls for state pension funds to do their part. At the same time, Schäuble intends to counteract the expected labor shortage. Since the baby boomer generation of the 50s and 60s will go into retirement in the future, Germans will be expected to work longer. The ministry envisages the retirement age remaining at 67, but the retirement benefit period will have "to be linked to life expectancy." In other words, the older Germans get, the longer they will have to work -- if need be, beyond the age of 67.

In order to achieve this goal, Schäuble's team wants to make early retirement even less attractive. "Inappropriate incentives for early retirement have to be removed," they write, and they have come up with proposals for achieving this. Until now, retirees who leave the workforce before they reach the statutory retirement age have had to accept a 3.6 percent reduction in their pension payments for each year. In the future, this would be 6.7 percent.

Widows and widowers would also have to tighten their belts. Currently, the surviving spouse receives 55 percent of the deceased spouse's pension. The idea is to significantly reduce this level in the future. This initiative would annually save billions of euros for the state pension fund.

Finance Ministry officials see additional cutbacks in social services as unavoidable if the state is to spend more money in other areas, for example, on repairing roads and improving the education system. These investments would "entail stronger limitations on consumptive expenditure," as it says in the draft paper.

The proposals from Schäuble's ministry serve to tighten a regulation that has only been enshrined in the German constitution for the past few years: the so-called debt brake, which calls for the German federal government to "maintain a nearly balanced budget" starting in 2016.

The government will still be able to take out loans to some extent. In 2016, for instance, it will be allowed to borrow some €10 billion. However, Schäuble and his staff say that Germany should not completely exhaust this scope for borrowing. They want a safety buffer. "It is absolutely necessary to maintain sufficient distance to the constitutional limit during budget planning to prepare for unexpected structural expenditure and revenue developments," it says in the paper. The experts also note that they intend to safeguard the national budget against a series of risks.

One of the examples that they cite is "a sharp economic downturn." If the economy collapses, as it did in the wake of the financial crisis in 2009, experience has shown that public coffers come under considerable pressure. Tax revenues decline while expenditures, such as for the unemployed, massively increase.

This can have a devastating impact on state finances. Following the most recent recession, government debt soared from 65 to nearly 83 percent of gross domestic product (GDP). Schäuble's experts say that the country cannot withstand another similar increase in public debt and conclude that it's time to take appropriate countermeasures.

To make matters worse, Finance Ministry officials say that it's also possible that Berlin will have to absorb the costs of its bank bailouts. At the height of the financial crisis, the German government supported ailing financial institutions such as Hypo Real Estate, Commerzbank and WestLB with capital injections and guarantees amounting to nearly €180 billion. Large quantities of toxic assets were transferred to so-called "bad banks."

But it's questionable whether these banks will ever be able to completely pay back this money. If that is the case, the federal government will have to waive its claims and permanently absorb the debt.

Schäuble's team foresees the possibility of a similar development with the euro rescue. Indeed, "irrevocable ESM payment defaults" is one of the reasons they list for their contingency plans. Behind the bureaucratic jargon lies the concern that Germany -- despite the government's solemn statements to the contrary -- will have to pay for the euro rescue.

Germany is currently supporting the European Stability Mechanism (ESM) to the tune of at least €190 billion. A portion of these guarantees and loans could actually be lost if Greece's government creditors forgive some of the country's debt. The losses to German public coffers could then easily amount to tens of billions of euros.

Consequently, Finance Ministry officials contend that the government will have to make cutbacks elsewhere in the future. Now, in a scenario that euroskeptics have long been warning about, German Chancellor Angela Merkel's government has finally admitted, for the first time, that to balance out the impact of the monetary crisis it will have to reduce expenditure for pensioners and people taking early retirement.

Germany Didn't Impose Austerity On Itself

The paper by the Finance Ministry officials contains a further admission. The next finance minister will have to make up for what Schäuble has failed to accomplish. Merkel's most important minister forced half of Europe to submit to austerity measures while the Germans were spending money hand over fist at home.

The current center-right coalition of Merkel's Christian Democratic Union (CDU), its Bavarian sister party, the Christian Social Union (CSU), and the pro-business Free Democratic Party (FDP) ignored the opposition's warnings and pushed through a costly childcare allowance that pays mothers who stay home €150 per child per month. Starting in mid-2014, over €1 billion per year will be budgeted for this expense. Public coffers are also missing €1.8 billion every year because the FDP managed to push through a bill eliminating a €10-per-quarter copay charge for visiting the doctor or dentist, payable since 2004 by people in the statutory -- meaning non-private -- health insurance system. But perhaps the most blatant example of overgenerous public spending during the coalition's current term was the tax reduction for hotel owners, which costs the government roughly €1 billion a year. The political process that preceded each jump in spending was always the same. Schäuble grumbled audibly, but ultimately agreed.

No wonder the opposition now accuses him of having failed. "The increased revenues from the economic recovery were not completely used to reduce deficit spending," says SPD finance expert Carsten Schneider. "This government demands harsh austerity measures from other European countries," he argues, "while it lavishly spends its own tax revenues."

Schäuble's team apparently has a similar view of the situation -- and even the boss himself has recently changed his tune. Schäuble says that he wants to run again in the next election, and he could even see himself serving another term as finance minister.

And, in keeping with his style, he is carefully preparing the Germans for hard times with his signature inscrutable Schäuble-speak: "We cannot allow ourselves to believe that the current positive situation is automatically secured for the future," he says. He goes on to say that sound public finances are "not a notion created by stubborn finance ministers, but rather the prerequisite for prosperity and social security." In plain language: Germany is going to start subjecting itself to some iron fiscal discipline. 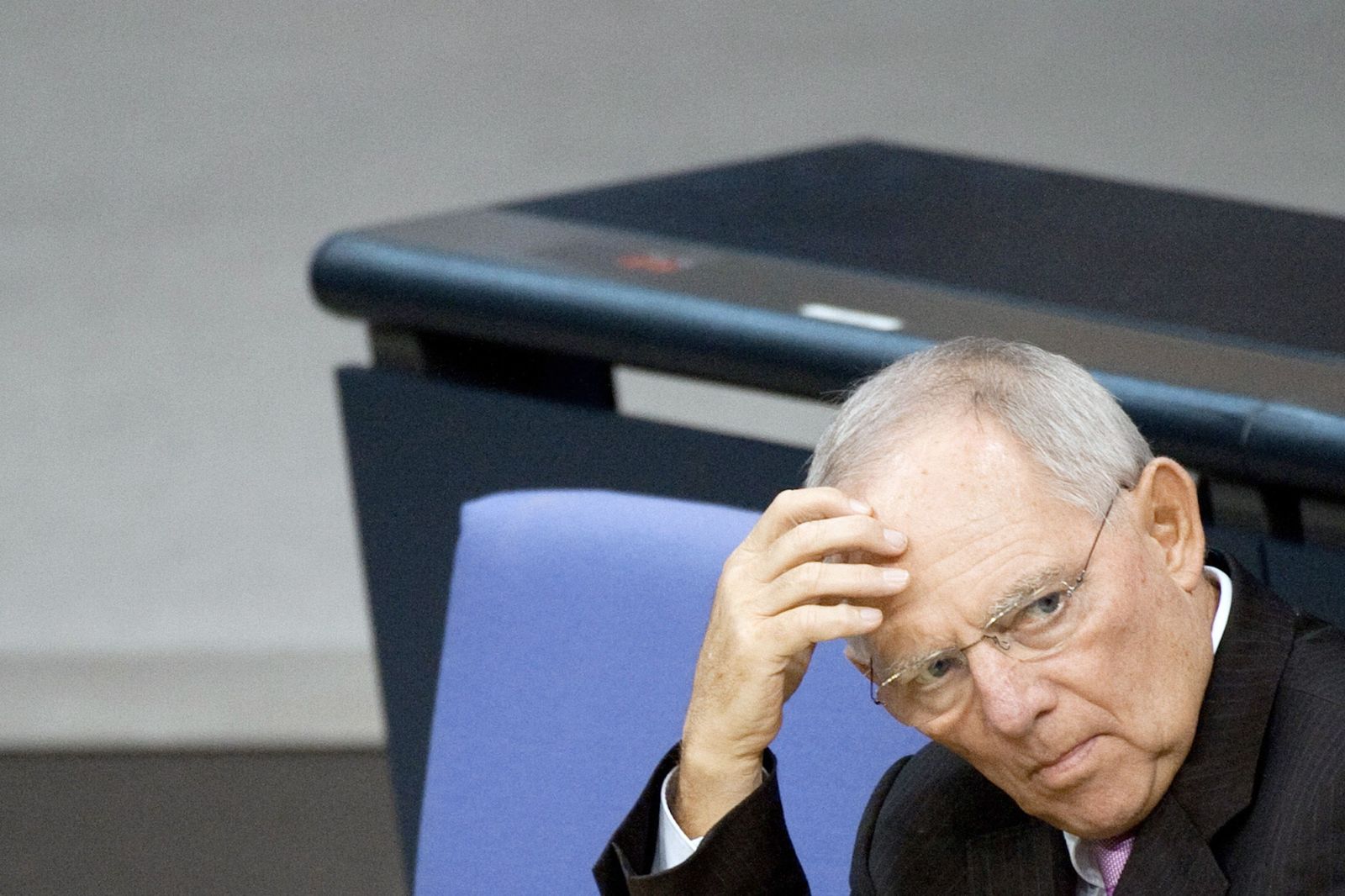 German Finance Minister Wolfgang Schäuble has had experts in his ministry draft plans for austerity measures in preparation for an economic slowdown and the possible fallout from the euro crisis. 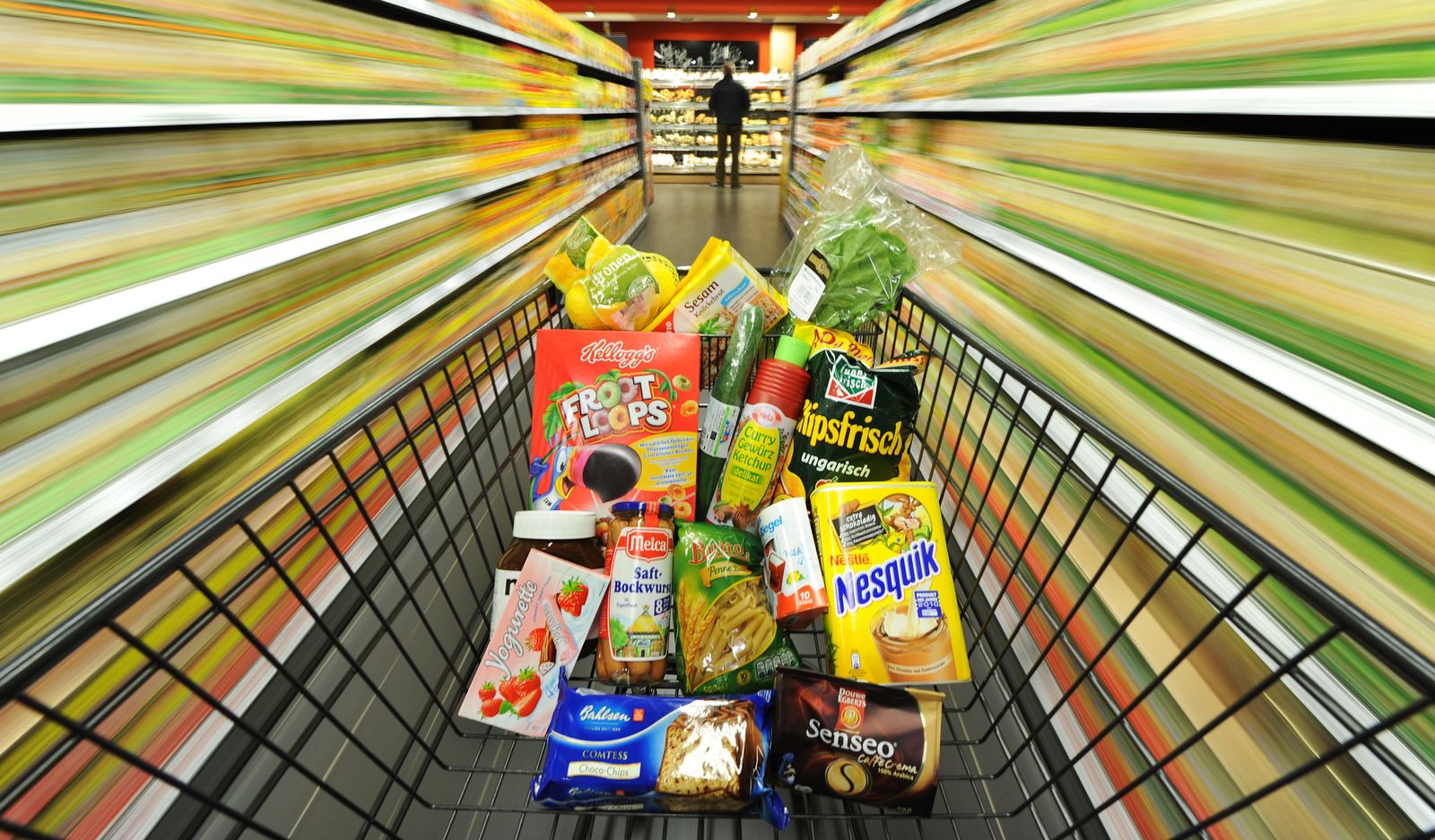 What the Finance Ministry officials have listed under the seemingly innocuous title "Medium-Term Budget Goals of the Federal Government" is nothing less than Germany's most comprehensive austerity program since World War Two. The experts propose increasing the reduced VAT rate of 7 percent -- which currently applies to such essential items as food, books and streetcars tickets -- to the regular VAT rate of 19 percent. This alone would allow the state to collect an extra 23 billion euros every year. 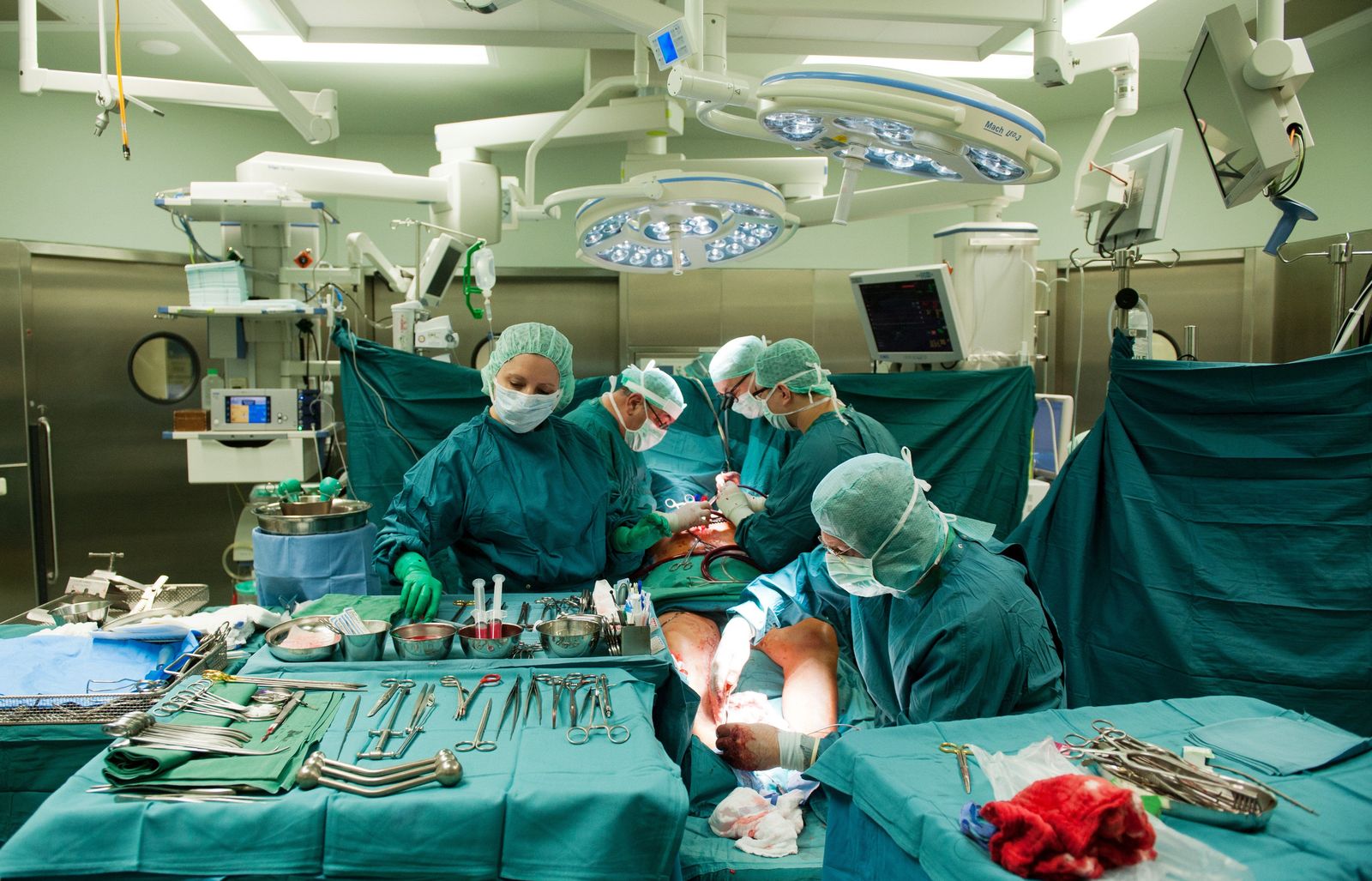 Schäuble's team wants to slash 10 billion euros from the federal government's contributions to the German health fund, which currently helps maintain stable statutory health insurance premiums. At the same time, they know that Germany's statutory insurers will require more money over the coming years as the population's life expectancy increases. This has led them to consider introducing a surcharge on income tax to support the system. The experts call this a "health solidarity tax."