In the old days, the biggest dinosaur discoveries were often found in clay or tar pits. These days, though, it seems paleontologists need go no further than the drawers of museums to find previously unknown beasts. Late last week, a scientist at the Berlin Natural History Museum announced the discovery of an unheard of leptocleidid plesiosaur that had sat for more than 100 years without being properly classified in a drawer.

On Thursday, the Berlin Natural History Museum announced the discovery of the world's only known Gronausaurus wegneri, a relatively small (at least by dinosaur standards) plesiosaur that navigated coastal waters and river deltas during the Early Cretaceous around 137 million years ago. The museum is calling the marine creature, which had large flippers that it used to move, a "little monster."

The bones of the around three-meter (9.8-feet) long creature had been discovered in a clay pit belonging to a former brickworks company in Gronau in the state of North Rhine-Westphalia near the Dutch border in 1912. The find came just two years after the discovery of an articulated skeleton of an elasmosaurid plesiosaur in the same pit, which was a literal treasure trove for paleontologists. It yielded numerous earlier discoveries, including the teeth of hybodont sharks and crocodiles.

After carefully studying the first find, paleontologist Theodor Wegner, who had been asked by the brickworks to excavate and research the pit, introduced a new taxon, Brancasaurus brancai. Two years later, he wrote of the discovery of another well-preserved plesiosaurid vertebrae and other parts of a skeleton -- the one found in the drawer.

Millions of Fossils in Drawers

"He assumed they might belong to another species and noted that the isolated fragments were under preparation," Berlin paleontologist Oliver Hampe of the Museum of Natural History, who made the drawer discovery, wrote in an article in Scientific Contributions to Palaeontology, one of the world's leading journals in paleontology. "No further remarks of field book notes exist about this second skeleton." Hampe wrote that the skeleton was later classified as belonging to Brancasaurus, "although Wegner (1914) recognized differences from the Brancasaurus." Hampe has honored Wegner's contributions to paleontology by naming the dinosaur Gronausaurus wegneri.

The researcher came across the find during a research visit to the University of Münster's Geomuseum, where it had been held since its original discovery. He then transferred the skeletal remains to the Berlin Natural History Museum for further research before confirming that the fossil was the only one of its kind known in the world.

The fact that the new dinosaur has been found in a drawer is actually less suprising than it might initially seem. Museum drawers, it turns out, are some of the richest repositories in the world for fossils. Tens of thousands of fossils around the world are stored for decades without proper research or analysis, so new species are sometimes discovered in archives. 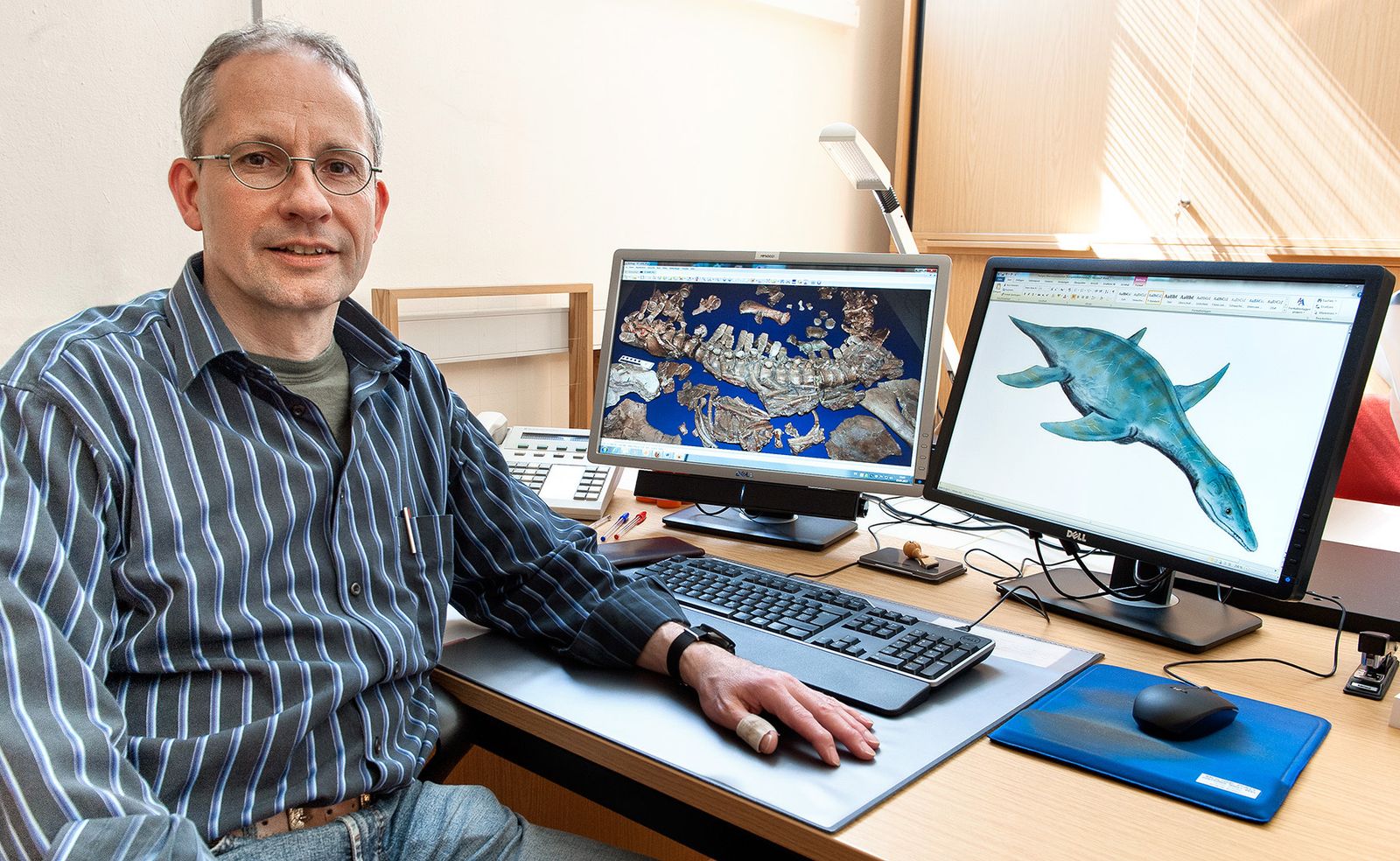 Paleontologist Oliver Hampe sits in front of a photo of the skeleton of the Gronausaurus wegneri and a computer rendering of the species.