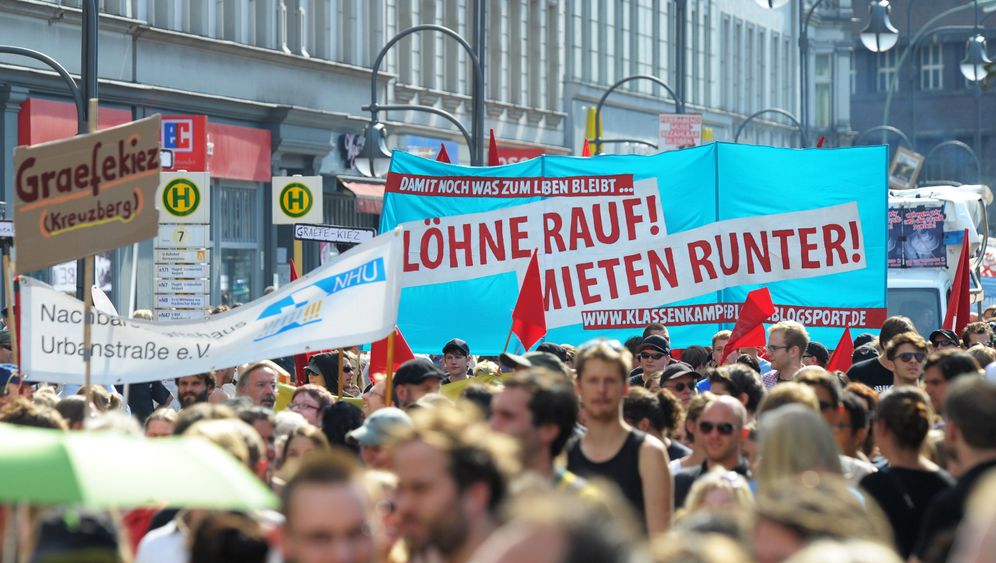 Above the gritty caverns and stale air of the Hermannplatz subway station, thousands of Berliners came together last Saturday in the city's Neukölln district in a gesture of solidarity. Middle-aged parents pushed baby strollers alongside leather-clad adolescents with colorful hair, protesting what they all see as the systematic displacement of the city's lower (and even middle) class residents.

"A lot of people showed up from very different backgrounds," said local resident Lisa Wendt, an active member of her local "Kiez Initiative," or neighborhood association. The 26-year-old helped organize the demonstration, which she claimed attracted around 6,000 protesters -- although police put the figure at 2,500. "People joined in along the way too. Clearly this is an issue that affects everybody," she told SPIEGEL ONLINE.

For years, Berlin's unique Bohemian flair has attracted students and creative types. But the affordable rents of the past have slowly begun to disappear as the city continues to undergo a rapid post-reunification transformation. Now international investors have set their sights on the German capital as typically working-class districts like Neukölln and Kreuzberg -- which have traditionally had large immigrant populations -- become increasingly popular with middle-class Germans and new arrivals already accustomed to paying more money for less space in the cities where they came from. This influx of outside money has sent rents in Berlin's central districts through the roof. And that, in turn, has angered long-term residents who feel turfed out of their homes.

Nearly 62,000 people have moved to Berlin in the last decade, many of whom have settled in the Mitte or Friedrichshain-Kreuzberg districts, according to a 2010 rent review published this summer by Investitionsbank Berlin, which supports development in the city-state. One effect of the population growth has been a six percent average rent increase in the last two years, the Berlin 2011 rent review showed. But city-wide figures fail to highlight the fact that in some areas -- like those at the heart of Saturday's protest -- the cost of living has exploded.

The Berlin tenants' association, the Berliner Mietverein, recently cited a 2010 study from the Topos Institute which said apartments in the Reuterkiez area of Neukölln were going for 13 percent more than in 2007. Market analysis carried out by the left-leaning German daily Die Tageszeitung, meanwhile, claimed this summer that rents in Neukölln have increased by 23 percent. While rent in Berlin is still cheaper compared to other large German cities, income tends to be much lower than in places like Hamburg and Munich. But the percentage of income spent on housing tends to decrease as income rises regardless of the city, leaving low-income earners disproportionately affected by the increased cost of living.

Wendt, for example, used to live in Friedrichshain, a district across the Spree River from Kreuzberg which had been part of East Berlin before the Wall came down. By the time she moved in, a deal had been agreed to privatize the state-owned apartments built by the city's housing society -- a public body tasked with providing low-income residents with an affordable place to live. Between 2002 and 2007, Berlin Mayor Klaus Wowereit approved the sale of around 110,000 apartments owned by the city. He also axed a support program for 28,000 state-subsidized apartments.

Eventually, ownership of her apartment building changed hands too, and Wendt and her neighbors began receiving notices about planned renovation and visitation appointments -- the new owners were looking to sell her apartment to the highest bidder. The improvements were more than necessary, she said. And even though she would have only had to pay for a fraction of them, the increased living costs eventually pushed her across the river to more affordable Neukölln.

'It Just Gets More Expensive'

For 18 months, Wendt has lived in a building in Neukölln which belongs to an investment firm in Luxembourg. "For a while, no repairs were done. We had water damage more than once and no one cared," she said. "But now that they're looking to sell the place, they sent us all letters requesting access to our apartments so they can assess the value and renovate." Wendt, having been through a similar process before, called a meeting of all the tenants and together they decided not to give the owners access to their apartments, thereby preventing any renovations. "If they want to bring our building up to code, fine," she said. "But if they want to modernize everything then it just gets more expensive for us." That was three months ago. Since then, they haven't heard a word from their landlords in Luxembourg.

'The Slums of the 21st Century'

Wendt was far from being the only Berliner at the demo who regards the privatization of the housing market with contempt. Berndt N. has lived in the Bergmannkiez neighborhood of Kreuzberg for 28 years -- having moved in when it was still separated from the other side of the river by the Berlin Wall. Leaning on his bicycle while delicately rolling a cigarette, he recalled the days when Kreuzberg used to be home to countless artists and students. Fortunately, he lives in a rent-controlled apartment, paying as little as a quarter of what some residents around him do.

According to district mayor Franz Schulz, rents in Kreuzberg and Friedrichshain have increased by 16 and 18 percent respectively in recent years. And even though Berndt has managed to sidestep the price hikes that have pushed out so many of his long-time neighbors, he said he is still worried that he too might someday be forced to leave his home for a cheaper apartment on the outskirts of Berlin. Of the city's 3.45 million inhabitants, 420,000 live in high-rise housing projects in places like the dilapidated, East German-built complexes in Treptow-Köpenick far south of the city center. Sociologist Hartmut Häussermann referred to such peripheral neighborhoods as the "slums of the 21st century" in a study conducted for the Berlin state government entitled "Monitoring Social City Development 2010."

As for Berndt, he believes the blame lies with politicians. "It's rather disappointing that our leftist government could not only allow this to happen, but play an active role in inciting it," he told SPIEGEL ONLINE. When asked what could be done, he suggested buying back all the apartment buildings the government privatized in 2004, as well as imposing a price ceiling for rents. "And they need to pay more attention to diversity," he added.

The battle between counterculture and the free market has already been at the forefront of more than one election campaign. Last Friday, Berlin daily Der Tagesspiegel reported that the far-left Left Party's lead candidate for the Berlin Senate, Harald Wolf, had called upon the next governing coalition to mandate the construction of at least 6,000 new apartments, half of which to be built by the city's public housing authorities. He also called for the state government to purchase apartment buildings from private owners, particularly in hard-hit neighborhoods, to quell rising costs.

But on Saturday, the protesters were keen to ensure that political posturing would not be on the agenda. From loudspeakers, crackly voices warned anyone affiliated with a political party from hijacking the demonstration for their own political gain. Wendt, still beaming from a successful day on the streets, said demonstrators no longer trusted the politicians to do the right thing. That's where the local neighborhood associations come in, she argues. "Rather than falling for party propaganda, we've created district and housing committees to represent ourselves and push through our demands -- that living space not be seen as a commodity, that anyone be allowed to live where he or she pleases."

Winding through the districts suffering most from rising rents, the protest eventually made its way to Treptow, a quiet neighborhood with plenty of trees where children watched curiously from apartment windows as the demonstration passed by. In front of a spotless white building with stylish steel facades, a small group of well-dressed men and women were waiting for the protesters. These were the prosperous outsiders who were the cause of the problem, according to the protesters. They held signs that read, "We are your neighbors," and were trying to make the case that they were not, in fact, bad people.

Luigi Lauer was one those in the group. In a light brown tweed jacket and white shirt, he didn't seem overtly affluent -- in fact, he moved to Treptow 12 years ago, but was keen to support the new arrivals. "I'm here to show my solidarity with the new neighbors," Lauer, who originally hails from the state of North Rhine-Westphalia in western Germany, told SPIEGEL ONLINE. Since he first came to Treptow, Lauer has seen the area blossom with new bars, restaurants and cafes -- things that make a place worth moving to, he said. "A little bit of gentrification did wonders for this neighborhood," he said. "Ten years ago, you couldn't find a single bar here. There weren't any restaurants or cafes. There was nothing."

In the eyes of most protesters, however, Lauer's arguments didn't add up. The small side demonstration was quickly surrounded by irritated members of the main protest. Even a sound technician from a local TV station made his frustrations clear, yelling at Lauer and his group as he held a boom mic over their heads.

Wendt dismisses Lauer's arguments as well. As a Neukölln resident, she is aware that the rates of openly advertised apartments have risen significantly in the last few years. "This is a big problem because Neukölln has a lot of low-income residents," she said. "These people can't afford to pay more and are forced to move."