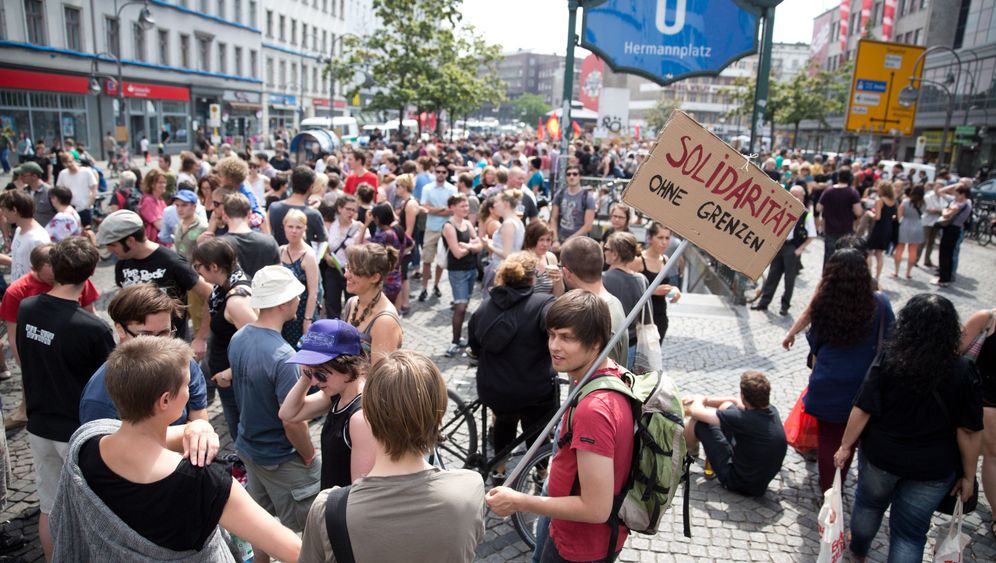 It's not out of the ordinary to see posters with sayings like "Fuck the City Government" or "Fuck the Cops" in Berlin's Kreuzberg district. The German capital's best-known neighborhood has always been a center of left-wing and Green resistance -- each May 1, it's a gathering place for anybody who can chant slogans with a blood alcohol content level of 0.2 percent. But since last week the Kreuzberg streetscape is one pithy slogan richer: "Fuck the Greens."

The German refugee crisis broke out into the open in this Green Party stronghold over the past week. In a former school building, hundreds of refugees had dug in, taking a part of the city hostage in the process. They hadn't received any refugee status in Germany, and wanted the law to work to their benefit. When the police started bringing the refugees into different housing, about 40 of them refused and threatened to jump from the roof or set the building on fire. The police cordoned off a large area surrounding the school, making parts of the neighborhood look like an occupied zone.

Hans Panhoff, a district council member with the Green Party, had requested for the building to be cleared because he didn't know what else to do. Ultimately, a last-minute compromise was reached, and the refugees were allowed to remain in the building, but here was a member of the Green Party calling for the police state to have squatters taken away. For many Green Party supporters, this was a lapse that needed to be explained, and not just by the party's Berlin chapter.

At the end of the week, when the police had already been called off, the head of the Green Party's state chapter in Berlin, Daniel Wesener, had the stress written all over his face. He was actually planning to launch a campaign to improve district staffing, but it wasn't to be. "This is a very difficult situation for my party," he sighed, "everyone who deals with refugees runs into boundaries because of the law and other realities."

'We Need to Recognize Mistakes'

That's true, but the situation is also pushing the boundaries of the Green Party. It's no coincidence that the refugees sought refuge in Kreuzberg -- first in a camp on Oranienplatz square, then in the school building. They believed that in a milieu that espouses the idea of open borders worldwide, nobody would confront them in an effort to prevent their occupation. The left-wing autonomous scene encouraged them to stay in the school instead of moving into the alternate housing offered by the city. Green Party District Mayor Monika Herrmann had allowed the refugees to stay until the counstruction councillor on her district council pulled the emergency brake.

"We Greens need to aggressively recognize the mistakes that were made," Wesener says, and then lapses back into the political and vague, away from Kreuzberg: "By tolerating the refugees in Oranienplatz and in the occupied school, the district wanted to show that a different treatment of Lampedusa refugee protests and a different refugee policy is necessary." It's like if Greenpeace occupied kindergartens in Alaska under the auspices of raising awareness of the melting polar ice caps.

There's a difference between campaigning for a liberal refugee policy and creating a space in which, in the end, chaos prevails. The police were called to the school in Kreuzberg 70 times. In late April, a Moroccan man died after a fight among the refugees. Members of the left-wing bourgeoisie -- which had long-since moved out of their squats and purchased their own apartments -- called the police. The autonomous milieu saw its preconceptions confirmed: German Greens have become squares too.

This Boat is Full

But it's always fail-safe to argue that it's the politicians who screwed up. Ben Irion, who recently opened a store selling fair-trade products in nearby Wiener Strasse, argues that it was not right to leave the refugees on their own for months: "There should have been a modicum of organization."

Panhoff -- the district construction councillor, and himself a former squatter -- was responsible for the building's security. When asked whether or not the district had let itself be blackmailed by the refugees, he balked, and considered his words carefully. He had acted "with a courage borne out of desperation," he said.

And the occupiers? Now they can stay in their ramshackle school building, which is to be turned into a refugee center. The demands of the refugees included the distribution of new building ID cards and a security guard who would make sure that only they would have access to the building. But the next person who arrives at the former Gerhart Hauptman school from Sudan or Morocco will need to find somewhere else to stay. This boat is full.