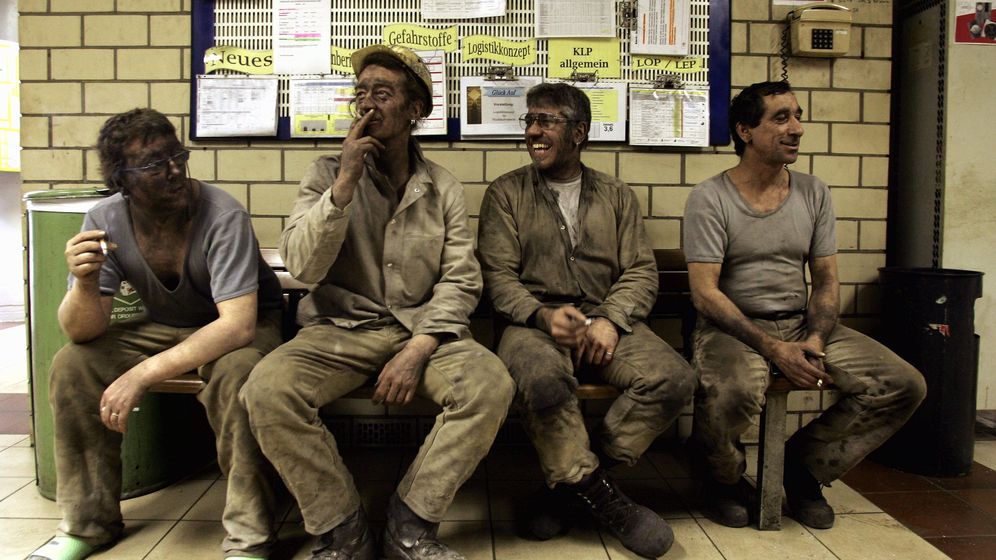 Photo Gallery: Coal Mining in Germany on the Way Out

When Chancellor Angela Merkel sees Economics Minister Rainer Brüderle at her weekly cabinet meetings on Wednesdays, it quickly becomes clear that the relationship between the two politicians is marked by distrust. Some time ago Brüderle, a member of the pro-business Free Democratic Party (FDP), ignored an important call from the chancellor on his mobile phone, a move which didn't exactly improve an already frosty relationship.

The relationship is likely to sink to a new low in the coming weeks. Once again, there are disagreements over energy policy. In the wake of the debate over the future of nuclear power, the government must now address what is to become of Germany's coal industry. There are no indications that the wrangling will produce an outcome that the government will be able to portray as a victory.

Merkel is fighting to keep German coal mines alive, with government subsidies, until 2018, and she is doing so against the wishes of the European Union. In mid-July, the European Commission decided that coal subsidies were to be phased out by 2014. Günther Oettinger, the former governor of the southern German state of Baden-Württemberg, who Merkel had installed as energy commissioner in Brussels, had unfortunately skipped an important meeting in the negotiations.

Now Merkel wants to overturn the EU decision, and she expects the full support of her economics minister. But Brüderle has no intention of helping the chancellor. In fact, he has made it abundantly clear to Merkel that he supports putting an end to subsidies for the coal industry as soon as possible.

Merkel and Brüderle at Odds

Merkel and Brüderle have addressed the subject several times in recent weeks, once on the sidelines of a debate in Germany's parliament, the Bundestag, and once in the presence of Ronald Pofalla, the head of the German Chancellery. But the two camps have completely different views on the outcomes of those discussions.

The Chancellery assumes that Brüderle will go to Brussels to champion the deal Merkel's conservative Christian Democratic Union (CDU) and its junior partner, the FDP, incorporated into their coalition agreement. A sentence on page 28 of that agreement does in fact state that the CDU/FDP coalition government will honor the decisions reached by the previous Merkel government, a coalition pairing the CDU and the center-left Social Democratic Party (SPD), on the coal phase-out. According to Merkel and her supporters, this means that coal subsidies are to end no sooner than 2018.

The Economics Ministry, however, holds that the EU's most recent decision has essentially abrogated the government's commitment to the coalition agreement. The ministry also argues that it makes financial sense to end subsidies for coal mining as quickly as possible. According to sources close to the economics minister, Brüderle has already informed the chancellor that she cannot count on his support in Brussels. "You can't expect that of me," Brüderle told the chancellor, according to sources.

It is a dispute in which the risks and opportunities for the two adversaries are unevenly distributed, to the advantage of the economics minister and to the detriment of the chancellor.

Mallorca Instead of the Mines

Arguing in favor of eliminating subsidies and phasing out coal production is a win-win situation for Brüderle. Almost 20 years ago, he was already telling fellow FDP members at party conventions that it would probably be much cheaper to send every coal miner on a lifelong vacation to Mallorca at government expense than to pay him for his hard work in the mines.

For Brüderle, the fight over coal could end in much the same way as the recent dispute over automaker Opel. By clearly opposing subsidies in the Opel case, he polished his reputation as a friend of the market economy and called attention to the limits of Merkel's power. Brüderle's approval ratings have gone up since then. If the FDP forces its chairman, Guido Westerwelle, out of office soon, Brüderle could very well end up taking his place, at least as the party's interim leader.

The issue is causing nothing but trouble for the chancellor. Every new row between the CDU and the FDP only heightens already widespread doubts as to the effectiveness of her coalition. Additionally, Merkel is hurting her image as a climate-friendly chancellor by supporting environmentally harmful coal.

It's also inconsistent for Germany to be handing out advice to other EU member states on how to clean up their budgets while at the same time insisting that it be allowed to spend roughly €10 billion ($13.8 billion) of taxpayer money on unprofitable coal mines in the coming years.

Politicians within the CDU and its Bavarian sister party, the Christian Social Union (CSU), are divided over the issue. The majority supports the chancellor, but there is also a significant minority that now openly sympathizes with Brüderle's position. "I am in favor of a solution that creates the smallest possible burden on the taxpayer," says CDU economics expert Michael Fuchs. "If it turns out that a phase-out in 2014 is more cost-effective, that's the option we should choose." Georg Nüsslein, the energy policy spokesman of the CSU national committee, summarizes his view of the issue as follows: "We should eliminate the subsidies for coal mining as soon as possible."

Not surprisingly, the coal mining industry is beset by fears that the last trip down into a coal mine could happen four years earlier than planned. Only a few days ago, in the Westphalian city of Hamm, yet another mine was shut down, leaving only five mines still up and running. The German coal industry, which once employed more than 600,000 people, counts less than 20,000 workers today.

An agreement Merkel's government fleshed out three years ago with the two coal-mining states, North Rhine-Westphalia and Saarland, regulates the next steps in the phase-out process, and this is the agreement the mining industry is invoking. "I expect that the chancellor will make use of her authority over Brüderle," says Ludwig Ladzinski, chairman of the general works council of coal producer RAG AG. At an event in May, Ladzinski adds, the chancellor gave him her personal commitment that the existing agreements would not be touched. "Her credibility is at stake here," says Ladzinski.

The subsidies are intended to pay for miners' social welfare benefits and to clean up the coal mines once they are defunct. The plan is to be managed by a foundation that emerged from the former Ruhrkohle AG (RAG) and was established by the former economics minister, and later head of Essen-based Evonik Industries, Werner Müller.

But the concept is on the brink of failure, and not just because of the objections from Brussels. The foundation itself faces growing financial problems. Planned sales of real estate and power plants have come to a standstill or are now likely to raise less money than expected. One Evonik executive warns that the foundation could find itself one or two billion euros short of funds in the coming years.

The estimated cost of paying for the long-term correction of environmental damage is also believed to fall well short of what is required. According to the most recent calculations, say sources close to the foundation, the foundation would have to come up with another €3 billion to meet its needs, a figure foundation officials are of course unwilling to confirm publicly. "We are not aware of any gaps in funding," the RAG foundation said in a statement.

The possibility that the subsidies could now be eliminated as well has come as a shock to foundation officials. The foundation warns that it could become insolvent, and it is assigning the blame to politicians. Some suspect that the fact that many government members were on vacation when the European Commission reached its decision on July 20 played a role in Germany's inability to stop it.

On that day, Competition Commissioner Joaquín Almunia presented a proposal at the EU Commission meeting in Brussels. In keeping with Merkel's wishes, the plan provided for the approval of coal subsidies until 2018. But the meeting, chaired by Commission President José Manuel Barroso, did not proceed as planned.

Some argued that competition was being distorted in Europe. Climate Commissioner Connie Hedegaard of Denmark and Environmental Commissioner Janez Potocnik of Slovenia came down on the side of environmental protection. In the end, the commission agreed that coal subsidies should end by 2014.

Experts in Brussels are unclear as to just how Merkel intends get the EU decision reversed. The current directive on coal subsidies expires at the end of the year. If it is not renewed, coal mining could end as early as Jan. 1, 2011.

No Help from the Ministers

European economics ministers, for their part, are unlikely to help Merkel out. When Economics Minister Brüderle meets with his counterparts from other EU countries on Dec. 10, he will face a stable majority of uncompromising subsidy opponents. No one in Brussels believes that this group would hold back the European Commission just to save a few German coal miners.

The chancellor will have to champion her cause herself. SPD politician Martin Schulz, leader of the Socialists in the European Parliament and a proponent of coal subsidies, advised Merkel's Chief of Staff Ronald Pofalla in July to present his own proposal in Brussels. But so far nothing has turned up in the EU capital.

"They ignored the issue for a long time at the Chancellery," says Schulz. A meeting of negotiators for the 27 member states in Brussels ended with no results about three weeks ago because the Germans were unable to present a clear position.

At a meeting in Berlin last Monday, Commissioner Oettinger also advised Merkel to take matters into her own hands. Oettinger himself could not offer Merkel any support. As a commissioner, he told the chancellor, he could not unilaterally champion German interests. Surely the German government could understand his position, he added.

'No Reason to Revisit It'

Merkel's only hope is to convince a majority of the EU's 26 other heads of state and government to support her plans. The next summit meeting is scheduled for the week before Christmas, which still gives Merkel some time to make her case.

It won't be an easy task, however. So far, only the two other subsidy recipients, Spain and Romania, are clearly on Germany's side.

The other countries, which in many cases have just imposed drastic austerity measures, are not exactly inclined to award more subsidies to the country that currently enjoys the strongest economic growth.

And even if Merkel manages to secure the support of most of her fellow European leaders, the next move will be up to the European Commission. Only it can formally advance a new proposal. But why should the commission amend its previous decision? In fact, the prevailing sentiment is that the commission has already been accommodating enough to the Germans.

"The decision in favor of 2014 was already a concession by the commission," says a spokesman. "We see no reason to revisit it."