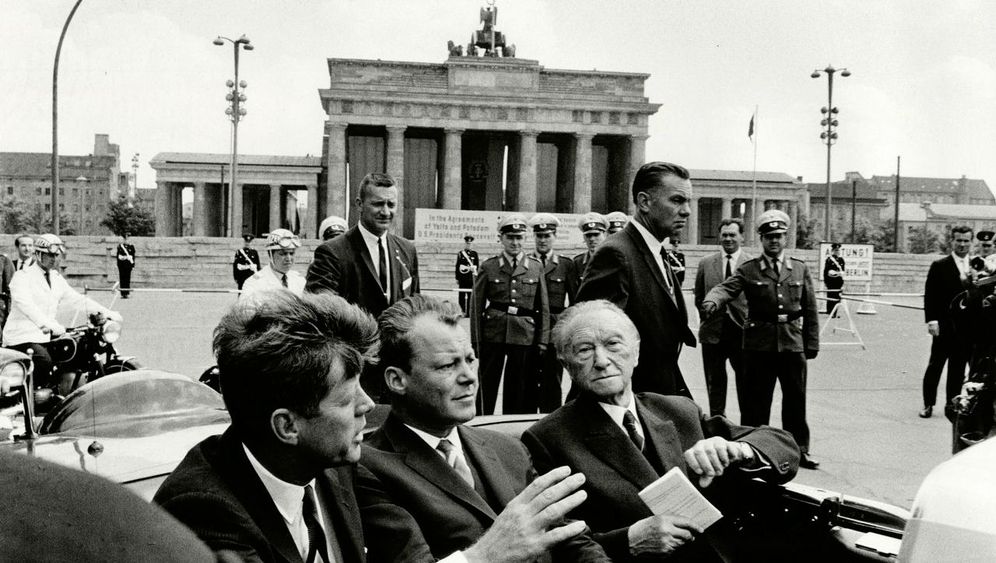 A pair of slippers awaits visitors at the entrance of a cozy two-room apartment in Berlin's Westend district -- the kind one might expect in one of Berlin's many old palaces and villas. But those looking for any valuable antiques here will be disappointed. Instead, every inch of wall space is covered with old photographs. The centerpiece of the collection is a black-and-white shot of John F. Kennedy waving from an open limousine.

The day Werner Eckert took the snapshot is still vividly engrained in his mind. It was one of the most influential events of the 81 year old's life. On June 26, 1963, the 35th American president came to visit West Berlin in a demonstration of solidarity with the people living in the divided city.

"There was never anyone like Kennedy before," Eckert says, recalling the visit. "You had a feeling you could immediately become friends with him. He may have been the most powerful man in the world, but his charisma immediately made you lose any reservations."

Eckert, a former athlete and amateur boxer who looks nothing like his age, takes great pride in his small collection of Kennedy memorabilia. When Kennedy came to Berlin in 1963, the young Eckert earned a living delivering coffee to cafés across the city. The job gave the native Berliner the chance to slip through barriers erected for the state visit to see the president three times.

In addition to Eckert's private treasure chest, Berlin is also home to an official Kennedy museum. "The Kennedys" holds the world's largest collection of Kennedy memorabilia. Museum director Alina Heinze is only 32 and yet she can recite Kennedy's speech by heart. 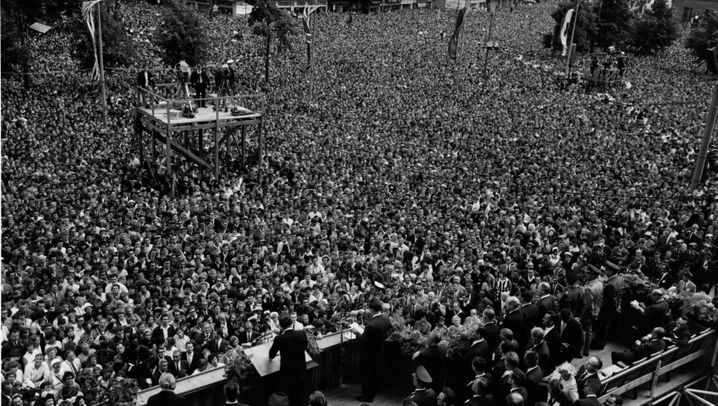 "All free men, wherever they may live, are citizens of Berlin," Kennedy's voice booms from the speaker in his thick Boston accent. The speech plays in a continuous loop on a large screen. Many who witnessed the president's visit come to the museum to relive the historical experience. "They often sit in the film room with tears in their eyes," says Heinze. "I've seen the speech countless times, but it still gives me goose bumps every time."

Kennedy visited Berlin a half-century ago, but memories have never faded. Heinze herself grew up in Berlin hearing stories about the memorable day. Her parents, who were in high school at the time, also saw the president speak.

"You can ask anyone who was in Berlin back then if they saw Kennedy, and most will almost certainly answer with a yes," she says. Half of Berlin took to the streets to greet Kennedy, with estimates of the crowd ranging between 1 and 2 million.

"It was a 100 percent unanimous welcome parade," says historian John Provan, who recently published a book on Kennedy's trip to Germany. "I can't remember any event of such magnitude for one person to be welcomed by so many people."

For many, last week's visit to Berlin by President Barack Obama reawakened memories of the historical day. But when one compares the two events, it also becomes clear just how much has changed over the past 50 years.

When Kennedy came to Berlin, the entire city was encouraged to welcome the president. School children were given the day off from school and many businesses remained closed. A half-million people flooded onto the square in front of Rathaus Schöneberg, the city hall for the Berlin district. Last week, Obama spoke in front of 4,000 handpicked guests -- many of them politicians. And whereas Kennedy allowed his open limousine to stop repeatedly so that he could shake hands with Berliners, Obama stood at the Brandenburg Gate behind bullet-proof glass. Today's security standards preclude the possibility of stirring mass events.

Historically, the events surrounding the presidents' visits couldn't have been much different. Kennedy came to the city under extraordinary circumstances. In 1961, practically overnight, the Eastern Bloc had started to build the wall that would divide Berlin for almost 30 years, and only months later Russian and American tanks had faced off at Checkpoint Charlie.

"We came closer to war than anyone of us wanted to realize," says Werner Eckert. "A world war that would have played out on German soil -- and that just 18 years after the war had ended. All these fears suddenly came alive again." Eckert lost his own father in World War II.

In addition, the traumatic experience of the Berlin blockade of 1949 was still fresh in many peoples' memories. For almost a year, Berlin residents had been completely cut off from West Germany. West Berlin was kept alive through the Americans' Berlin Airlift. Increasingly, however, the people of West Berlin feared the US might abandon the contested territory in order to prevent a confrontation with the Soviet Union.

"And then Kennedy came and said these words and they were just the right words to say," Heinze says. "I think it was a situation where Kennedy and the circumstances and the people just clicked."

But it wasn't just Kennedy's famous line that enthralled Berliners at the time. Actress Anita Lochner says it was also the way Kennedy conveyed his emotional words. The daughter of a diplomat, Lochner came to Berlin as a young girl. Her father Robert was the director of RIAS, the radio station in the American-occupied sector of Berlin. During the state visit, he served as Kennedy's translator. Anita was 13 at the time. The president remained an important topic for the family for some years to come.

"Kennedy had a very special aura," she says. "There are some people who walk into a room and everybody is quiet and looks at them. That's the kind of person he was."

The teenage girl experienced that herself when she went to greet the president on the street on West Berlin's Clayallee, where the US had its diplomatic headquarters in the city. When the car stopped, she ran up with a group of American children and touched Kennedy's back. With tears in her eyes, she admitted to her mother later that day that she had fallen in love with the handsome president.

"How strange it is," Jackie Kennedy wrote in a note to then Berlin mayor and future chancellor Willy Brandt after her husband's death. "Sometimes I think that the words of my husband that will be remembered most were words he did not even say in his own language."

It was only as Kennedy climbed the steps of the Schöneberg Rathaus and heard the roaring crowds that he decided to say the four words in German, Lochner recalls. "Then Kennedy and my father went into Willy Brandt's office to practice that and the rest is history," she says.

Kennedy's decision to change the speech was quite risky. After pushing a program of détente and peaceful outreach in his American University speech only two weeks earlier, Kennedy spoke some of the harshest words ever directed against the Russians in Berlin. Museum director Heinze believes that the shocking reality of the wall that separated families and homes truly saddened Kennedy. The fact that he changed his words after seeing this chilling view gives his speech a human touch, she says.

Military historian Provan believes that Kennedy had a gut feeling that this was the right thing to say. "Those four words underscored Kennedy's pledge of personal responsibility (to ensure Berlin's security and freedom)," Provan says. "He didn't say the US is a Berliner. He, as the leader of America and as a man, stood up for his political concept and actions. That's a daring move."

Today a note card written in Kennedy's handwriting still counts among the most cherished possessions at Berlin's Kennedy museum. Without it, the people of Berlin might never have figured out what the president was actually trying to say. In red ink and with phonetic spelling scrawled across the page, it reads: "Ish bin ein Bearleener."