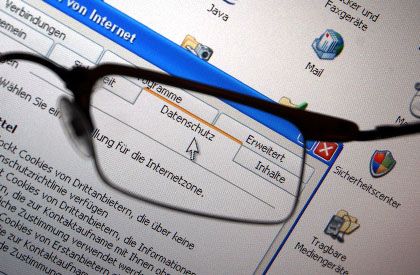 Many Germans worry that expanding the powers of the federal police will lead to infringements upon privacy rights.

For months, a large number of Germans have fretted over whether federal lawmakers would grant federal police aggressive evidence-gathering abilities to combat terrorism. They feared they could be similar to the highly developed -- and criticized -- ones enjoyed by the FBI or those portrayed in "The Lives of Others," the Oscar-winning film about an eavesdropper working for the Stasi, the secret police of the former East Germany.

On Wednesday, a partial answer finally came, when the lower house of the German parliament, the Bundestag, approved anti-terrorism legislation that will vastly expand the cyber-spying powers of the federal police to gather information from the computers, telephone lines and homes of suspected terrorists.

The measure passed 375-168 with the strong backing of Chancellor Angela Merkel's grand coalition government pairing her conservative Christian Democrats with the center-left Social Democrats. The measure's backers hope to get the stamp of approval of the Bundesrat, the upper house of parliament, before Christmas so that it can go into effect in early 2009.

Before that happens, opposition parties and privacy rights advocates hope to bring the issue before the Federal Constitutional Court in an attempt to have it blocked for infringing upon privacy rights guaranteed by the constitution.

The measures are specifically aimed at increasing the investigative powers of Germany's Federal Criminal Police Office (BKA). Among the increased powers would be the right to spy on people's computers using Trojans carrying so-called "Remote Forensic Software" that can clandestinely search through hard drives and send potentially incriminating evidence back to investigators. However, the measure does not allow the police to enter a home in order to put monitoring equipment or software on a computer.

The measure also allows the BKA to bug, film or photograph the homes of suspected terrorists or places where they are staying. Also permissible is the tapping of suspects' telephones and cell phones as well as tracking the location of mobile phone calls.

The measure will also permit the BKA to perform data-mining searches as a preventative measure rather than as part of criminal proceedings following terrorist attacks. In certain cases, such data-mining can also include the use of data seized from private institutions.

According to the Interior Ministry, similar investigative powers are already enjoyed by the police forces of Germany's federal states as well as the other federal intelligence services, including Germany's Federal Intelligence Service (BND), the German army's military security service (MAD), and the Federal Office for the Protection of the Constitution (BfV).

Among the measure's main backers is Interior Minister Wolfgang Schäuble -- known for his provocative, US-inspired anti-terror tactics -- who has steadfastly insisted that legal changes are necessary in order to target people suspected of using sophisticated means to plan terror attacks.

While discussing the issue Wednesday on the Berlin-based radio station RBB-Inforadio, Schäuble praised the measure, although he lamented that the approval process had already taken "far too long." In response to accusations that the measures infringe upon privacy rights, Schäuble responded: "We know  what the constitution allows and what it doesn't allow, and we find (the delay) embarrassing."

Following the vote, leaders from the major opposition parties were quick to repeat their long-standing opposition to the measure. Gisela Piltz, spokesperson on domestic politics for the business-friendly Free Democratic Party (FDP), criticized the vote as displaying "disregard for the core areas of leading a private life."

Ulla Jelpke, a domestic-policy expert with the Left Party, labelled the measure a "license for arbitrariness" and described it as having the air of an "authoritarian state."

Renate Künast, the Green Party's parliamentary leader, told the eastern German public television station MDR that the measure was unconstitutional and accused Schäuble of wanting "to create a German FBI."

In response to such accusations, Schäuble has responded that opposition is based on a misunderstanding of the circumstances. "The majority of people who criticize (the measure)," Schäuble said, "haven't understood that, in principle, the BKA has no more authority than each state police has had for 50 years."

Schäuble also told the center-left Süddeutsche Zeitung that it was unacceptable for people "to defame our liberal constitutional state to the point that young people think that the matter is related to something like what the Stasi would do."

Schäuble added the states would not lose any power on account of the BKA's expanded powers.

As some critics see it, however, Schäuble's characterization of the issue as one revolving around state-versus-federal issues ignores the fact that the real change comes in the relationship between the Interior Ministry, which oversees the BKA, and the Office of the Federal Prosecutor. In effect, the BKA will no longer have a subordinate position to the prosecutor's office in conducting vaguely defined terror investigations.

"The new division of power turns the BKA into a federal super-police with comprehensive authority," a critical assessment of the measure in the Süddeutsche Zeitung said Wednesday. "The BKA may now use secret investigative methods that up until now have been primarily the hallmarks of the intelligence services -- without there being any of the parliamentary controls such as those underlying intelligence service activities." Germany's intelligence agencies are subject to rigid oversight in the Bundestag.

Non-governmental protests against the measure have been led by groups representing the interests of doctors, lawyers and journalists, who worry the measure will infringe upon the privacy rights of patients and clients.