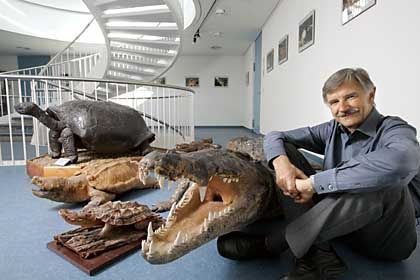 Josef Reichholf is unconvinced by those who argue that global warming will threaten animals and plants with extinction, and cause malaria to spread in Europe.

SPIEGEL: Mr. Reichholf, are you worried about global warming?

Josef Reichholf: No. Personally, I'm even looking forward to a milder climate. But it will also not pose any major problems for mankind as a whole.

SPIEGEL: Where does your optimism come from?

Reichholf: The vast majority of people today already live under warmer and, in many cases, far more extreme conditions than we pampered Central Europeans. Homo sapiens is the only biological species that can handle practically any type of climate on earth -- from the deserts to the polar regions, from the constantly humid tropics to the high altitudes of the Andes. Not even the animals that follow human society most closely, the rats, have developed such an astonishing ability to adapt in the course of evolution.

SPIEGEL: In what sort of climate does man feel most comfortable?

Reichholf: Biologically speaking, we are children of the tropics. Wherever man lives, he artificially creates tropical living conditions. We do this with warm clothing, and with heated offices and homes. A tropical temperature of about 27 degrees Celsius (80 degrees Fahrenheit) constantly prevails underneath our clothing.

SPIEGEL: But, as an ecologist, aren't you at least concerned about animals and plants?

Reichholf: Many species are certainly threatened, but not by climate change. The true danger comes from the destruction of habitats, such as the rampant deforestation of species-rich tropical forests. Particularly as a conservationist, I believe that focusing on the greenhouse effect is very dangerous. The climate is increasingly being turned into a scapegoat, to deflect attention from other environmental crimes. A typical example is the misleading debate over catastrophic flooding, which is in fact caused by too much development along rivers and not by more extreme weather events, which we can't change anyway.

SPIEGEL: What do you see as the greatest threat to plants and animals?

Reichholf: Industrial agriculture is the number one killer of species in Germany. With their monocultures and over-fertilized fields, farmers have radically impaired the living conditions for many animals and plants. Many species have already fled from the countryside to the cities, which have been transformed into havens of biodiversity. We are also seeing another interesting phenomenon: Major cities, like Hamburg, Berlin and Munich, have formed heat islands where the climate has been two or three degrees warmer than in the surrounding countryside for decades. If higher temperatures are truly so bad, why do more and more animals and plants feel so comfortable in our cities?

SPIEGEL: And what is your view of the prognoses that global warming will cause up to 30 percent of all animal species to become extinct?

Reichholf: It's nothing but fear-mongering, for which there is no concrete evidence. On the contrary, there is much to be said for the argument that warming temperatures promote biodiversity. There is a clear relationship between biodiversity and temperature. The number of species increases exponentially from the regions near the poles across the moderate latitudes and to the equator. To put it succinctly, the warmer a region is, the more diverse are its species.

SPIEGEL: Are you saying that the greenhouse effect could even help improve biodiversity in the long term?

Reichholf: Exactly. And this can also be clearly inferred from the insights of evolutionary biology. Biodiversity reached its peak at the end of the tertiary age, a few million years ago, when it was much warmer than it is today. The development went in a completely different direction when the ice ages came and temperatures dropped, causing a massive extinction of species, especially in the north. This also explains why Europe has such a high capacity to absorb species from warmer regions. It just so happens that we have many unoccupied ecological niches in our less biodiverse part of the world.

SPIEGEL: In other words, for you global warming means more flourishing landscapes on the planet?

Reichholf: Indeed. When it becomes warmer, many species receive new habitats. The overall picture is clearly positive, as long as we don't destroy the newly developing habitats right away by intervening in nature in other ways. It's no accident that most of the species on Germany's red list of endangered species are the heat-loving species. Many of them could be given new opportunities to survive in Germany.

SPIEGEL: But aren't you underestimating the rapid pace of the current warming? Many animals and plants are unable to adapt quickly enough to a changing climate.

Reichholf: This claim is already contradicted by the fact that there have been much faster climate fluctuations in the past, which did not automatically lead to a global extinction of species. As a biologist, I can tell you that only the fewest animals and plants are accustomed to rigid climate conditions. Take our little wren, for example. Many would call it a sensitive little songbird. But the wren thrives just as well in Stockholm as it does in Munich or Rome. It even lives above the tree line in the Alps. The only places we don't see wrens are where there are no bushes or trees growing at all.

SPIEGEL: But there are certainly animals that live in very limited niches. For example, how would polar bears survive global warming?

Reichholf: Then let me ask you in return: How did the polar bear survive the last warm period? Perhaps Knut at the Berlin Zoo is an exception, but polar bears in the wild don't exactly survive by sucking on ice. Seals are the polar bear's most important source of food, and the Canadians slaughter tens of thousands of them every spring. That's why life is becoming more and more difficult for polar bears, and not because it's getting warmer. Look at the polar bear's close relative, the brown bear. It is found across a broad geographic region, ranging from Europe across the Near East and North Asia, to Canada and the United States. Whether bears survive will depend on human beings, not the climate.

SPIEGEL: Is there really no plant or animal species that isn't at risk of extinction because of a further rise in temperatures?

Reichholf: I certainly can't think of any. There are a few flatworms that can only exist in icy cold springs. These creatures do in fact appear to be disappearing in places where the springs are warming up. But this could also be a coincidence, because the closest relatives of these worms tolerate a much broader temperature spectrum.

SPIEGEL: Conversely, should we be worried that malaria, as a result of global warming, will break out in our latitudes once again?

Reichholf: That's another one of those myths. Many people truly believe that malaria will spread as temperatures rise. But malaria isn't even a true tropical disease. In the 19th century, thousands of people in Europe, including Germany, the Netherlands and even Scandinavia, died of malaria, even though they had never gone abroad. That's because this disease was still prevalent in northern and central Europe in previous centuries. We only managed to eliminate malaria in Europe by quarantining the sick, improving hygiene and draining swamps. That's why I consider it virtually impossible that malaria would return to us purely because of climate change. If it does appear, it'll be because it has been brought in somewhere.

SPIEGEL: Why has it become a dogma that we should be afraid of warmer times?

Reichholf: It's a mystery to me. As recently as the 1960s, people were more concerned about a new ice age -- and that would indeed pose a great danger to us. The most catastrophic eras were those in which the weather became worse, not phases of warmer climates. Precisely because we have to feed a growing population on this planet, we should in fact embrace a warmer climate. In warmer regions it takes far less effort to ensure survival.

The interview was conducted by Olaf Stampf and Gerald Traufetter.