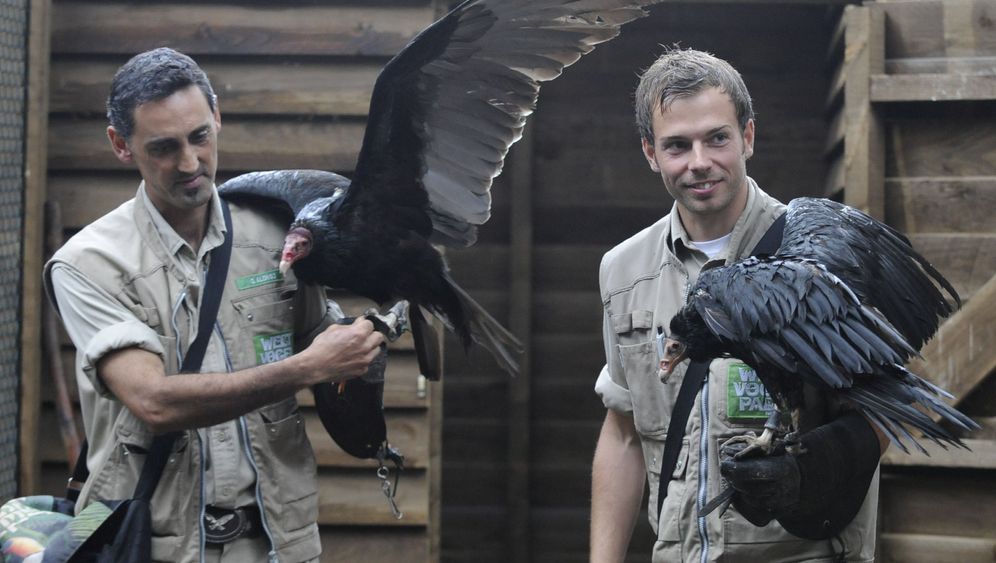 The mascot of the Walsrode bird park in the German state of Lower Saxony is an impressive animal, with black and white feathers punctuated by a powerful bright yellow beak. But lately the toucan has been forced to share the spotlight with a decidedly less glamorous cohort. With his dark plumage and tiny red bald head, Sherlock, a turkey vulture, is the new star of the zoo.

The unlikely celebrity gained his fame after police in Lower Saxony made him and two other turkey vultures the center of an experiment in search and rescue. With their penchant for locating carrion, police thought the scavengers could also aid in locating human bodies. Not only can turkey vultures detect a dead mouse from more than 1,000 meters (3,300 feet) away, but they have a major advantage over sniffer dogs -- they can fly, removing the challenge of difficult terrain.

"We're not able to keep up with them on the ground," says police commissioner Rainer Herrmann from the State Office of Criminal Investigation (LKA) in Hanover. Herrmann is actually responsible for forensics work, but his fellow officers have regarded him as a bird expert ever since he created a database for rare parrots. He plans to outfit Sherlock and the other vultures with tracking devices so they can be followed by police cruisers.

The scheme captivated both the media and police departments from around the country, with between 30 and 40 requests for the birds' services, Herrmann said. The market for such an idea certainly exists -- each month the Federal Criminal Police Office (BKA) receives several thousand missing persons reports.

But so far the flying detectives have failed to show much interest in their new task. Despite years of training, Sherlock's success has been limited. While he can locate a stinking burial shroud which the police gave the bird park to use for training purposes and which is clearly marked with a yellow plastic cup, Sherlock doesn't approach the shroud by air. He prefers to travel by foot.

"He hops around a 20-square-meter (215-square-feet) grassy area until he finds the cloth," bird park spokesman Stefan Freundlieb told SPIEGEL.

Last year, visitors could watch the number in the bird park's daily flight exhibitions. But now Bibo the pelican and Dolly the falcon have taken over. Sherlock refused to perform and was removed from the show. Freundlieb seems uncomfortable with the media hype over the topic. "The vultures are not currently available to journalists," he said.

Sherlock has not managed to conduct a search outside the zoo yet, either. "The bird is naturally anxious, and he would hide in the woods or bolt," says his trainer, whose name is German Alonso. He adds that the vulture also struggles to distinguish between dead people and dead animals.

Extra help brought in to the animal park last summer to handle the project has also been a disappointment. Two young vultures named Columbo and Miss Marple were meant to learn from Sherlock. "But the young ones can't do anything -- besides fight with each other," Alonso said.

A trainer was meant to be caring for the birds for several hours a day, but the bird park lacks enough personnel. The relevant authorities have also expressed their doubts about whether the police should be financing the trainers, saying that it is unlikely that the vultures will be used in a missing person search.

Their misgivings seem well-founded, given the level of hype around the project. Seduced by the extensive media coverage, members of the center-left opposition Social Democratic Party have already inquired whether the state government might want to create an "international training center for search vultures."