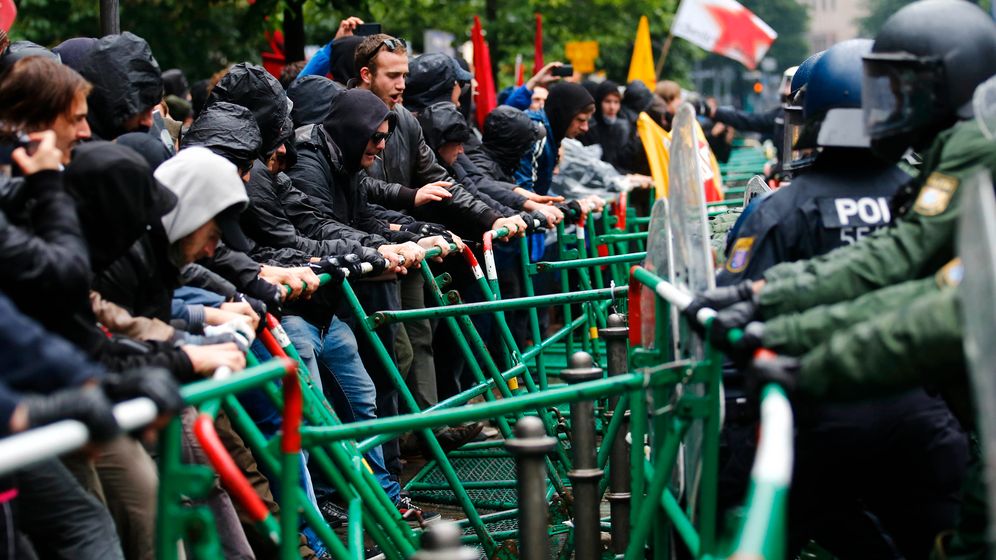 An estimated 2,500 supporters of the anti-capitalist group "Blockupy" demonstrated in the German financial capital of Frankfurt on Friday, blocking access to the European Central Bank (ECB) in protest of euro-crisis austerity policies.

Banging on drums and carrying signs that read slogans such as "Block the ECB -- Fight Capitalism and Austerity" and "Humanity before Profit," the demonstrators cut off roads leading into the downtown financial district.

"The business operations of the ECB have been successfully hindered," a spokeswoman said, according to the German news agency DPA. "We are making Europe-wide resistance to devastating policies of poverty visible."

The European Blockupy movement, which formed after the Occupy Wall Street movement in 2011, is critical of euro-zone leaders' approach to the debt crisis. Forcing struggling countries to raise taxes and implement tough austerity measures has only served to deepen the Continent-wide recession, they allege.

As the protest got underway in the morning, riot police surrounded the ECB building and took positions at other nearby financial institutions, while a helicopter hovered overhead. A police spokesman said he wouldn't necessarily characterize the event as a blockade, however.

Banks in the area were reportedly able to prepare for the demonstration, with many employees either taking the day off or working from home. Some traders were also reportedly working from undisclosed locations or provisional trading halls.

"So far, besides a few isolated incidents, everything has been peaceful," a police spokesman told the DPA. Further protests were planned for later in the day in downtown Frankfurt and at the airport, Germany's busiest international hub.

The demonstrations are being held about one year after some 20,000 people took part in a similar event in the city, when police detained hundreds of protesters. They also come ahead of Europe-wide protests planned for June 1.