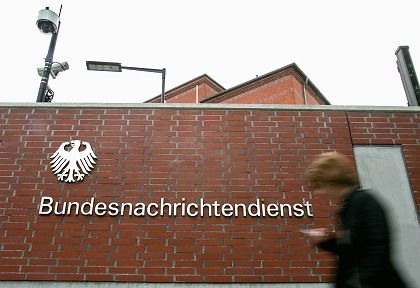 Germany's foreign intelligence agency, the BND, had an entire Afghan ministry under surveillance, SPIEGEL has learned.

Germany's foreign intelligence service, the Bundesnachrichtendienst (BND), has come under pressure recently after it came to light that agents had monitored the e-mails of Afghanistan's Commerce Minister Amin Farhang and SPIEGEL correspondent Susanne Koelbl.

Now SPIEGEL has learned that the BND's spying activities in Afghanistan were far more extensive than was previously thought. As well as spying on the correspondence between Farhang and Koelbl, the BND had actually monitored the entire computer network of the Ministry of Commerce and Industry.

Surveillance specialists from the BND had infected the network with a special software known as a spyware, which then collected a large quantity of data and sent it to the BND's headquarters in Pullach, Germany. Among the data were several government e-mail addresses, confidential documents and also passwords.

Using the spyware, the German spooks were able to get hold of, among other things, the login details for Farhang's personal Yahoo e-mail account. As a result, the BND were able to log in to the minister's personal e-mail inbox over the course of the surveillance operation, which began on June 6, 2006. Over the following months, the BND agents were also able to read e-mails sent to Farhang by SPIEGEL correspondent Susanne Koelbl.

The German Chancellery will now, as part of a special investigation, look into the question of whether the BND also spied on other Afghan ministries over the course of the operation. However the investigation will be hampered by the fact that most of the documents relating to the operation have apparently been destroyed.

The Afghan government is outraged at the surveillance operation. "I am appalled and disgusted by these methods, which have no place in a constitutional state," commented Afghan Foreign Minister Rangin Dadfar Spanta. He said he did not want a "big scandal," but emphasized that "this kind of thing must never happen again." The entire Afghan government felt the same way, he said.

German Foreign Minister Frank-Walter Steinmeier has now apologized for the monitoring operation. The Associated Press, citing a Foreign Ministry spokesperson, reported Saturday that Steinmeier had expressed his regret about the surveillance in a telephone call with Spanta. The two foreign ministers agreed that the incident would not affect the "good and trusting relationship between the two countries," the spokesperson said. Steinmeier also plans to telephone Farhang over the weekend to discuss the incident, according to the Associated Press.

The head of the BND, Ernst Uhrlau, has come under pressure over the last few days as a result of his involvement in the affair. The monitoring operation came to light when Uhrlau apologized to Koelbl on April 18 for the BND's monitoring of her emails over several months in 2006.

Uhrlau was questioned by the German parliament's intelligence oversight committee last Wednesday and Thursday amid allegations that he had lost control over some of the agents in his organization and had failed to inform the Chancellery, which is responsible for supervising the BND's activities, about what he knew. At one point, it looked like Uhrlau might be forced to resign, but the head of the oversight committee said Thursday that the spy chief could keep his job. However other agents are likely to face disciplinary measures as a result of the scandal.

The affair is an embarrassment for the BND, which has been tainted by similar scandals in the past, and has also annoyed the Chancellery. A government spokesman said Friday that Chancellor Angela Merkel's faith in Uhrlau had been "disturbed" but not "destroyed."